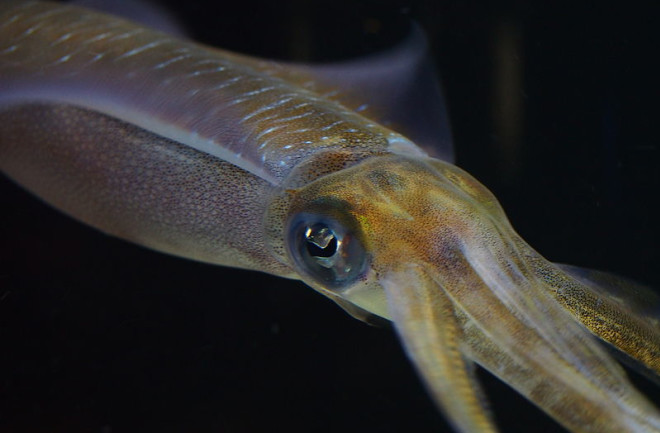 But squid just get a quick hello, a few colorful flashes, and second or two of perfunctory sperm delivery—or so it would seem. A new study suggests that for all they lack in kink, bigfin reef squid do have engaging sex lives. As explained in a new paper in The Biological Bulletin, these randy cephalopods take direction well, switching up their sexual position at a female's behest to improve their odds of successfully mating.

They say it's not the size of your hectocotylus, it's how you use it—and that certainly rings true for male bigfin reef squid. Scientists have watched these cephalopods get it on to study their mating behaviors, and have noticed males tend to mate in one of two positions. If a male mates with female in what's called the 'male-parallel' position where he's oriented the same way as she is, he's able to thrust his hectocotylus—an arm that's modified for mating—firmly under his mate's mantle.

That deep penetration places his spermatophores (the little packets containing his sperm) right at the opening of her oviduct, in easy swimming distance of her eggs. But if he instead flips upside-down and mates 'male-upturned', he can only reach her mouth area. Males tend to prefer the parallel position, for obvious reasons, but don't always get the chance. Smaller males seem to mate upturned, especially after fights with larger males. Unfortunately for them, proper positioning makes a huge difference: 95% of male-parallel matings succeed, while less than half of male-upturned ones do.

As Florida Georgia Line would say, "tell me how you like it." (Photo Credit: Divervincent/Wikimedia Commons)

But while researchers have known that these squid have these different positions, and that smaller males tend to approach male-upturned, it was unclear whether females have any say in the matter.

So researchers from National Tsing Hua University in Taiwan collected 4 live squid—two males, and two females—and placed them in tanks where they could be monitored by several GoPro cameras. They then waited to see who got frisky and how.

While both males made various mating attempts, Male 1 was very into Female 2, according to the researchers. "It is apparent that male 1 attempted to mate with female 2 intensively," they write, documenting a total of 116 mating attempts in five days, with 34 of those occurring in the first hour.

Most of the time, he tried to mate in parallel (76 attempts), though none were successful. And the footage revealed why: "she showed a distinct high contrast body pattern that might be interpreted as a “rejection” signal," the authors explain. To reject an upturned approach, the female simply swam off.

Male 1 almost always approached a few times in parallel, then, when she refused his advances, tried upturned instead, which led the authors to believe that "males may switch their mating tactics as the result of female rejection signals." The following video isn't from the study, but the mating bout it portrays is very similar to what's described for Male 1:

In this video, you can see the male try both positions. At ~00:20, he approaches from below in parallel, with his "belly" facing the bottom of the tank like hers. As he attempts to mate, she flashes a dark pattern—squid speak for not like that, dear. He then pulls back, flips, and approaches again from above in the upturned position. Much better.

While previous studies have shown that differently sized males tend to use different positions, this research showed that individual males switch things up as needed in response to their partner's signals. "The present study demonstrates for the first time that the same male is able to switch mating tactics back and forth immediately and repeatedly," the authors explain. "This finding suggests that female squids signal their mating receptivity visually and that male squids alter their mating tactics accordingly."

Perhaps the most important takeaway, though, is that when males listen to their partners, they are more likely to succeed. When Male 1 switched to the upturned position, he succeeded 40% of the time—which is a whole heck of a lot more than the 0% he got when he did things his way. So a Valentine's lesson from bigfin squid: listening to your partner goes a long way towards successful lovemaking. Go figure!