A new study suggests that the expelled mucus from sponges could support biodiversity in coral reefs and other seafloor ecosystems. 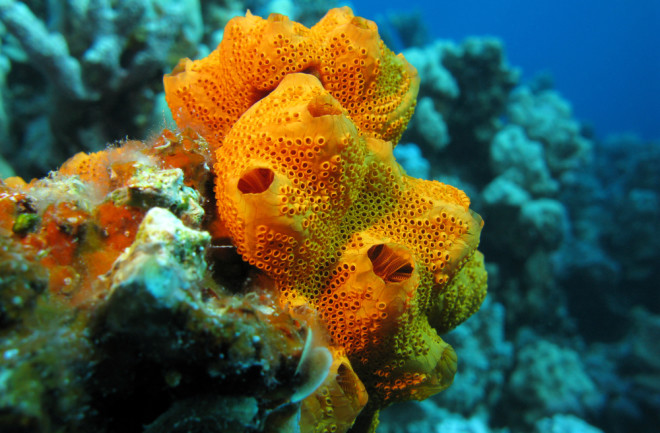 What lives under the sea and sneezes out mucus for fishes to eat? Sponges do, according to a new study.

Sponges filter dissolved sugars and proteins from the surrounding water. They incorporate these tiny particles that are too small for other animals to eat into their bodies. Scavenging fishes can eat sloughed-off sponge skin and move vital nutrients up the food chain. The phenomenon is called the “sponge loop” and explains how biodiverse coral reefs can thrive in nutrient-poor marine deserts.

In the study, researchers showed that sponges can “sneeze” out large particles for fishes to eat and siphon nutrients up the food chain. The findings, the authors say, add another layer of complexity to the sessile creatures’ role in supporting biodiverse ecosystems.

“Let’s be clear: sponges don’t sneeze like humans do,” says co-author Jasper de Goeij at the University of Amsterdam in the Netherlands in a press release. “A sponge sneeze takes about half an hour to complete. But both sponge and human sneezes exist as a waste disposal mechanism.”

The team recorded day-long time lapse videos of the stove-pipe sponge, Aplysina archeri. Water typically flows into intake holes called ostia at the side of their bodies. Outtake valves called oscula at the top eventually expel the water. But researchers also noticed that the animals carried a translucent mucus in the opposite direction — backwards towards the ostia.

This snot trapped bulky particles and carried them down slimy “mucus highways” back towards the intake valves. Every three to eight hours, the sponge contracted its surface to “sneeze” the snot back into the environment.

“We actually think that most, if not all, sponges sneeze,” says lead author Niklas Kornder, also of the University of Amsterdam, in a press release. Some sponges don’t expel particulates from their outtake valves, but the new research suggests that they could still direct nutrients into the sponge loop through sneezes.

Figuring out how sponges sneeze could show us how multicellular animals evolved, the authors say. Around 700 million years ago, the first multicellular organisms arose, and sponges were among the inaugural bunch. The ancient creatures had to devise ways to coordinate bodily movements and transport waste. That means that sponge sneezing could reflect the first evolutionary step that animals took towards muscles and neurons.

The team doesn’t know how sponges sneeze yet — but figuring it out could tell us how single-celled organisms leaped towards complexity.