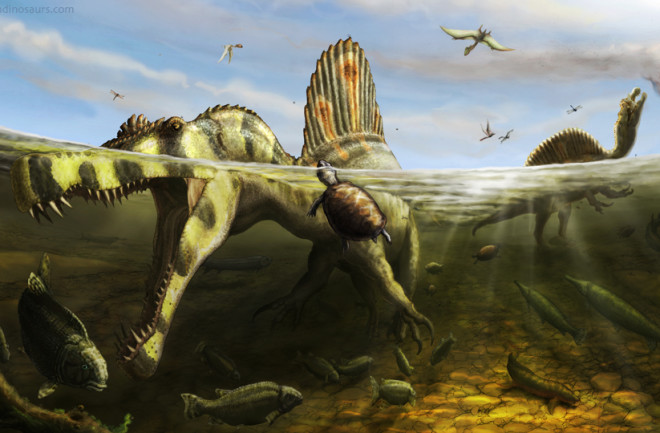 Spinosaurus aegyptiacus trawls for mesozoic fish. Illustration by Brian Engh The meat-eating dinosaur Spinosaurus rose to terrifying fame in Jurassic Park III, when it took down the comparatively small Tyrannosaurus rex. Now, thanks to a newly discovered partial skeleton, Spinosaurus has an even greater claim to fame: this fearsome sail-backed beast spent much of its time in the water, a definitive first for dinosaurs.

A global team of paleontologists digitally reconstructed the skeleton of Spinosaurus aegyptiacus based on a new specimen from the Kem Kem beds of eastern Morocco. The fossils confirm that Spinosaurus was more than 49 feet (15 meters) long – at least 8 feet longer than T. rex, in line with previous estimates based on more fragmentary specimens. But the new skeleton was shown to be still growing, so a full adult would have been even bigger. More unusually, there were signs that the dinosaur was a fantastic swimmer. Researchers determined that Spinosaurus had a suite of adaptations that allowed it to spend much of its time in the water and that, contrary to Jurassic Park’s representation, would have required the animal to walk on all four limbs when it was on land. That makes Spinosaurus the first dinosaur known to be adapted to a semi-aquatic lifestyle. Similar to some extinct marine reptiles such as pliosaurs and also to modern crocodiles, Spinosaurus possessed an array of small openings in the end of its snout that came together to form an internal network. In crocodiles this structure houses pressure sensors used to detect movement in water; Spinosaurus may have used them to find prey such as sharks, sawfish and lungfish. Its conical teeth would have been ideal for catching fish, and its neck and back vertebrae were designed for maximum movement of the head while underwater. Further similarities to crocodiles include the position of the nostrils, which are placed much further back on the skull than any other dinosaur. This would have enabled Spinosaurus to breathe while almost completely submerged.

Taking to the Seas

Spinosaurus’ tail vertebrae were formed in a way that allowed maximum propulsion, suggesting that the dinosaur was a powerful swimmer. Its short legs and flat feet are superficially similar to early ancestors of whales and even some modern mammals that use their hind legs for paddling. Adaptations to Spinosaurus’ skeleton to facilitate swimming would have hindered it on land, however. Its center of gravity was much further forward than other theropod dinosaurs, meaning it was probably unable to walk on two feet. Some bones in its skeleton were also denser than other theropods, a clear sign that this animal was adapted to spending more time in water. Finally, the unusual “sail” on the back of Spinosaurus, previously thought to regulate body temperature, now seems likely to have been used for display, remaining exposed above the water while the animal was swimming. Many animals in the past have evolved from land-dwelling ancestors into swimming marine forms, including early crocodiles, turtles, scaled reptiles, and mammals. Spinosaurus may have been part of a dinosaur lineage that was experimenting with adapting to a fully aquatic life. As it lived alongside numerous other giant predators, including dinosaurs and crocodiles, this would have enabled it to exploit a new feeding niche, reducing competition. It shows us that even the largest predatory dinosaurs were not evolutionary “dead-ends,” but actually successfully evolving into a range of bizarre and diverse forms.