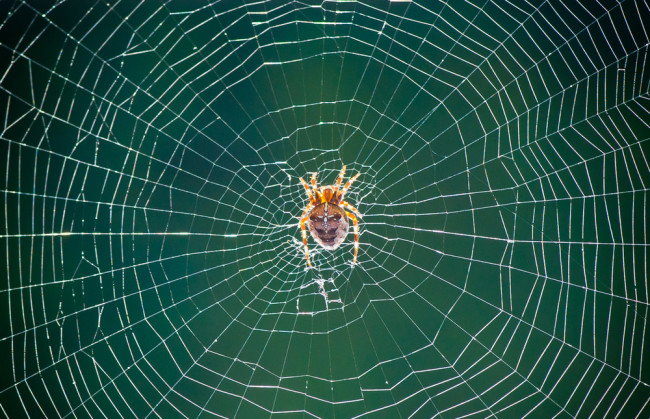 Just like busking musicians, spiders, too, pluck their strings to find food and potential mates. A research team from the universities of Oxford, Sheffield and Strathclyde studying the way spider webs vibrate has discovered that spider silk can ring in a greater range of tones than most materials. Spiders use these vibrations to determine whether they’ve caught a meal, are being approached by a mate or if they need to make web repairs. Researchers could potentially borrow the unique sonic properties of spider silk to build lightweight sensors and actuators. Good Vibrations To make their discovery, researchers extracted golden silk from the orb weaver spider, mounted individual strands, and tested them along with nylon, copper beryllium wire and silkworm silk. They blasted sound from a loudspeaker next to the materials to measure the movement of sound waves through the fibers. Researchers also fired bullets at the strings for high-rate ballistic testing. High-speed cameras captured footage of the test and lasers recorded measurements of the minutest vibrations along the 0.004-millimeter silk thread, Wired reports

, which are small, hypersensitive grooves that deform with even the slightest disturbance. When a fly hits a web, spiders will pluck the individual strings that are carrying information from the wriggling insect to interpret the data flowing through the silk. Based on the results of their study, researchers hypothesized that the shape of spider webs may be based upon a sonically calibrated design. "The sound of silk can tell them what type of meal is entangled in their net and about the intentions and quality of a prospective mate," Oxford University researcher Beth Mortimer said in a news release

. "By plucking the silk like a guitar string and listening to the ‘echoes’ the spider can also assess the condition of its web." Researchers will publish their findings in the journal Advanced Materials.

Wonder Webs Spider silk is no stranger to engineering buffs, who have proposed using the incredibly strong and lightweight strands to make bulletproof vests, cables, and even artificial muscles. The latest finding is just another reason to pay close attention to the silk-spinning creatures who make the corners of our ceilings their home. Now, it's time to watch a spider home in on its prey using vibratory signals.