Spider Assassin and Other Costume Ideas

Still don't know what you're going to be for Halloween? Don't worry! Inspired by this week's scientific findings, I'm here to help.

This ostrich is all ready to go door-to-door with its snazzy costume of reflective dots. Its outfit was created by a team of American and Australian scientists who wanted to analyze what makes ostriches such efficient runners. They found that the birds' secret is very springy tendons that allow them to store and release a lot more elastic energy than humans can.

(Another unstated conclusion of this paper is that you should never try to train an ostrich. Researchers note that after they hand-reared five ostriches and spent eight months training them 3-4 times a week, only "two animals were amenable to the procedures required for full three-dimensional gait analysis.")

If you are already an ostrich, this costume will require less work to prepare. But you will need help from someone with hands. 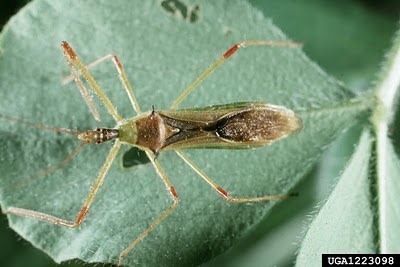 Hate spiders? Dress up as Stenolemus bituberus, the assassin bug. These wily insects sneak onto spider webs and wiggle the threads to get the spiders' attention. When spiders come to investigate, the assassin bugs attack. Researchers recorded the web vibrations made by assassin bugs and compared them to the vibrations made by other things that might fall into a web: aphids, fruit flies, falling leaves, or male spiders that come a-courting. ("Recordings of courting males continued until the male copulated with the female.")

Obviously, a costume incorporating implantable LEDs will make you the coolest kid on the block. This technology is meant to be used for medical devices--a light-up display under a person's skin could let doctors know whether something's working right. But it could also make sweet glowing tattoos. You'll just need to have some minor surgery first.

Actually, this might be a better one to keep in mind for next year.