Rocks fallen from space have captivated our species for millennia. 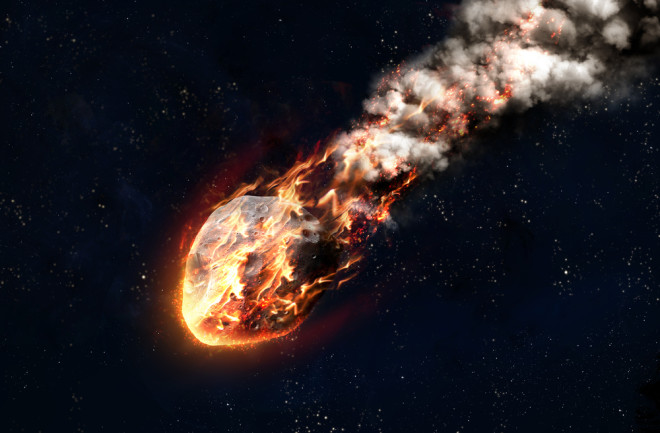 High above our planet, chunks of metal swirl around the solar system in lonely orbits. Metallic asteroids number in the millions, but they're relatively quite rare—bits and pieces of lonely matter that never became planets. Occasionally, they find a home.

A tiny fraction of these dull, misshapen hunks of metal have rained onto our planet for millennia, sparking briefly alight as they kiss the atmosphere before biting deep into the planet's surface — if they aren't incinerated first.

An even smaller fraction make it to Earth and remain buried. Fewer still are brought to the surface by shovels, winches and ropes, or by the persistent combination of weather and time. And these cosmically rare finds can be valuable. A 1,400-pound chunk of meteorite was expected to fetch up to $1.2 million at auction at Christie's in 2016. Others listed during this year's sale stretched well into the five figures.

For collectors, meteorites represent a rarified conceit: a primordial bit of the heavens you can hold in your hand. And if the archaeological record is any indication, humans have been beguiled by space rocks for millennia. Meteorites, especially those made of metal, have been found in in shrines, tombs and burial grounds the world over. Fallen from the sky, made of a material stronger and harder than anything on Earth — it's little wonder they inspired such awe.

The most valuable soil in the world, when it comes to meteorites, is found in southern Kansas, near the town of Brenham. Somewhere between 10 and 20 thousand years ago, a large metallic meteorite struck the ground nearby, raining burning pieces on the surrounding landscape.

A piece of the Brenham pallasite on sale on Ebay. (Credit: meteoritemadness)

The small farming community has for years been the site of pilgrimages by meteorite hunters eager to rake metal detectors through farm fields. They're hoping to unearth a fragmented piece of the Brenham pallasite, a rare class of hybrid stone and metal meteorites featuring crystals of translucent olivine embedded in a solid metal framework.

Thousands of pounds of the Brenham meteorite have been pulled from the fields piecemeal. The largest, discovered in 2005, was none other than the Christie's showstopper that went on the block two years ago. Meteorite hunter Steve Arnold discovered it five feet beneath a farm field using a homemade metal detector—it's the largest pallasite ever found on U.S. soil.

But Arnold was far from the first person to wrest shards of this cosmic visitor from the dirt. Pieces of the Brenham meteorite have passed through the hands of humans for over 2,000 years.

The remains of the meteorite are no longer confined to the rough parabola its fragments inscribed in the Kansas soil; instead, they've trickled away, borne by human curiosity. This gradual diaspora left bits and pieces of Brenham in Native American tombs a thousand miles away in Ohio and Illinois. Nuggets of iron from the fall were worked into beads, awls, buttons, axes, earrings, chisels and more by the tomb's builders.

The mounds belong to the Hopewell, a loose affiliation of various Native American tribes who left massive earthen burial mounds scattered across the Midwest and American South. The Hopewell were avid collectors: The mounds are filled with treasures like obsidian, mica, shells, grizzly teeth, copper and silver gleaned from sites ranging across a broad swath of the country.

The Hopewell could have wandered across the Brenham site at some point, or traded with a group that did, and the unusual metal would have been a prized addition to their collections. The meteoric treasures number in the dozens, enough to indicate that the meteorite was more than a curiosity to these ancient people — the wondrous metal was clearly meaningful.

A fragment and a few beads from the Hopewell Brenham find. (Credit: Philipp Heck/The Field Museum of Natural History)

Wondrous that pure iron may have been, but it was hard to do much with. The Hopewell were working metal before the concept of forging existed among Native Americans, meaning aspiring blacksmiths had their work cut out for them. The diversity of meteoric finds in Hopewell mounds testifies to their persistence, though, as well as to the metal's value.

Tellingly, most prominent among the artifacts are small metal beads, far easier to create than axes or chisels. "They’re made by taking a piece of an iron meteorite and repeatedly heating and then cold working it. You essentially put it in a wood-fueled fire, heat it up to some reasonably high temperature, bring it out and pound it between two rocks," says Tim McCoy, the curator of the meteorite collection at the Smithsonian National Museum of Natural History. "They're not forged, they're basically made into a flat sheet and then rolled into the shape of a bead."

The beads were probably worn as jewelry, and may have served some ceremonial purpose, McCoy thinks, although he's not sure what that may have been. For the Hopewell, it's not clear they knew the extraterrestrial origins of their metallic ornaments. The Brenham meteor fell long before we have any record of them gathering pieces of it.

They may have seen others fall, and connected the dots, but to them, as with others, the novelty may have stemmed simply from the material itself. Before the advent of smelting, there was no real way to obtain pure metal from ore. Even if the Hopewell had stumbled across iron ore deposits, the material would have been largely useless to them.

But meteoric iron comes unadulterated, in a form ready to be worked. For the Native Americans, it was likely the only pure iron they had ever seen — a material far stronger and more malleable than any other.

The best analogy for the present day lies in the mythical metals of J.R.R. Tolkien and George R.R. Martin. Meteoric iron was akin to mithril, or Valyrian Steel — rarer and stronger than anything else. Even setting aside the novelty of its extraterrestrial origins, meteoric metal was close to magical.

Accordingly, Brenham is but one of dozens of meteorites that ended up in the hands of pre-industrial cultures. Whether it's the allure of cosmic mystery or more utilitarian aspirations, space rocks have enticed people and cultures all over the globe. The impulse that drew Steve Arnold to a dusty Kansas farm field cuts across time and place.

"There's meteoritic metal in the tombs of most cultures," says Derek Sears, a researcher affiliated with NASA who specializes in meteorites. "And certainly in North America it’s quite widespread, relatively speaking … it turns up in a lot of different burial grounds, a lot of different tombs."

Chunks of iron meteors have turned up in archaeological digs worldwide, from the massive pyramids of Egypt to crumbling pueblos in Mexico. Their uses have been almost as varied as the cultures that unearthed them — meteorites have become everything from everyday implements to objects of worship.

Native Americans in the Toluca Valley in Mexico combed through fields for chunks of meteoric iron to work into farm implements. Indigenous people near Willamette, Oregon dipped their arrows in the rounded hollows of a massive iron-nickel meteorite to bring them luck on hunts. Inuit in Greenland chipped pieces from a trio of meteorites that fell on the island, hammering them into harpoon tips and knives.

The Willamette meteorite, found in Oregon and revered by Native American tribes, at the American Museum of Natural History. (Credit: Wikimedia Commons)

Beads from Egypt, a dagger from Turkey and a pendant from Syria all date to before 2,000 B.C. Perhaps the most famous meteoric artifact, a dagger found in King Tut's tomb, dates to around 1350 B.C.

A fragment of the Glorieta mountain meteorite was found in a Native American dwelling in New Mexico, polished to a bright sheen. It had probably been carried for years in the pouch of a medicine man. Another meteorite turned up in Casas Grandes, Mexico in a tomb filled with mummified bodies. Like the bodies, it too had been wrapped in burial shrouds.

Whole meteorites have shown up in tombs and structures in Arizona, Montana, Mexico and Mississippi, placed with deliberate care; they were all likely venerated as idols by the people who placed them there.

"On many occasions they seemed to know these things were coming from the sky," Sears says. And the sky was a mysterious place.

Objects from above might be endowed with strange powers, or serve as messages from the heavens. That the meteorites seemed to be made of a substance few had ever encountered certainly couldn't have hurt.

Even today it is difficult to quantify the allure of a meteorite. It could be the thrill that holding a piece of the early solar system brings. Maybe, like one individual, we just want to make a sword out of it. Or perhaps, like the Hopewell, we simply value beauty and rarity.

Brenham, and the many other meteorites found by ancient cultures, function as a kind of common denominator, a bridge between these vanished people and ourselves.

Ultimately, he says, "I think it tells you they're much more like we are than you might think."