South America Was Settled More Than Once, New Study Says 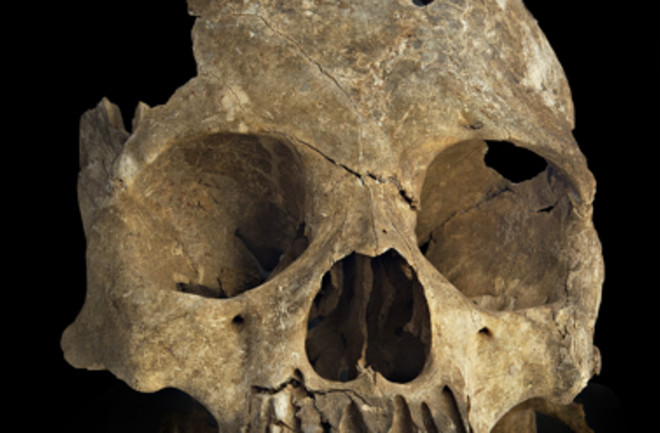 Photo of the cranium of Burial 32 at the archaeological site of Lapa do Santo. DNA for the study was extracted from this individual. (Credit: Maurício de Paiva)

When the Americas were first settled, sometime in the past 25,000 years, it happened from the top down. Eurasians made their way across the Beringian land bridge (or followed the coastline, what’s known as the Kelp Highway hypothesis) from Siberia to Alaska and spread throughout their new territory.

Once they were here, recent evidence has indicated that it didn’t take very long, a few thousand years perhaps, for people to reach the tip of South America, though there’s some disagreement as to the routes and timing of the migrations. Other groups ventured east to what is now southern Ontario, and the Americas were well on their way to being truly settled.

A related paper provides additional details about how ancient Americans spread throughout the New World. You can find Discover’s coverage of that research here.

The story isn’t quite that simple, though. While researchers have previously thought of this process as a single wave, which washed southward through the continents and held fast, a new paper hints that there were multiple migrations from north to south. Successive groups of people made their way out of North America and across the equator, argues a large international team of researchers in the journal Cell, and not every group that made the trip survives in the genetic record today.

It’s been difficult to see the comings and goings of ancient peoples in the Americas largely because the archaeological record of their activities is slim. The dearth of data has led to disagreements over things as fundamental as when the Americas were actually settled, and we have still only a piecemeal view of the movements of the First Americans. But, advances in genetic sequencing technologies have given archaeologists another perspective on ancient populations, and the team here has gone far above and beyond previous efforts in this region of the world.

Most Genomes to Date

The researchers assembled 49 genomes from bone fragments found across South and Central America, some up to 11,000 years old. By comparing the DNA to that of people living in the region today, they were able to begin picking out the tracks of ancient migrations across the region. Surprisingly, the researchers uncovered two entirely new large-scale influxes of people to South American thousands of years ago. Genetic evidence of those migrations is now almost totally gone, they say, obscured by more recent entries into the region.

It upends previous theories that South America was colonized just once, and that indigenous people there today are related to these initial settlers. Instead, it appears that the very first South Americans have almost entirely vanished, replaced by new settlers thousands of years later.

The first wave of migration came at least 11,000 years ago, when a group of North Americans known as the Clovis moved down into Belize, Brazil and Chile. This first wave of Clovis people were related to a burial known as Anzick-1, a baby found in Montana dated to around 13,000 years ago, and the only known individual from that time. Some of his relatives would go on to move into Central and South America, it appears, but it wouldn’t be long before they were replaced.

Another group of migrants entered the continent no earlier than 9,000 years ago, the researchers say, and it is these people whose ancestry shows up in modern inhabitants.

The history of migrations to South America gets more complex, though. The researchers also picked out another, separate influx of people to different regions. Around 4,200 years ago, an entirely different group of ancient Americans moved from the California Channel islands down into southern Peru and northern Chile. Such a migration had never showed up in the archaeological record, meaning that it was previously invisible to researchers. It does align with a sudden increase in the number of archaeological sites discovered from around that time, though, adding weight to the theory.

The findings are helping to fill in the broad brushstrokes of how ancient peoples moved around the Americas, but our understanding of the ways different groups of First Americans spread and intermingled is still quite coarse. The data we have is based on a very small sample of DNA from people at a few locations across Central and South America.

“More ancient genomes before 11,000 [years ago] are going to be useful to time the arrival of those early Central and South American lineages, but additional data from later time periods and other geographic locations is going to be pivotal to provide more precise insights into the population history of different American regions,” says study co-author Cosimo Posth, an archaeogenetics researcher at the Max Planck Institute for the Science of Human History.

The story of how humans settled the Americas just got more complex. And it’s likely only the beginning.