Soul-Made-Flesh-A-Thon: A Sale to Clear Out the Brain 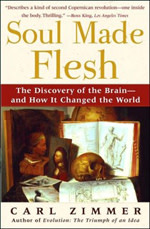 Thanks to everyone who scooped up autographed copies of At the Water's Edge (72 are out the door as of this writing, and 8 are left). My shelves are getting close to being purged of author's copies--which is good, since those shelves are about to come crashing down for some home renovation. To keep the momentum going, let me offer to you autographed copies of a book I wrote about the origin of neurology in the wild, woolly days of the scientific revolution: Soul Made Flesh. It's a group biography of a seventeenth-century band of big thinkers who put the brain--which was considered by many to be little more than a lump of phlegm--at the center of our existence. At the hub of this circle of virtuosi was the English physician Thomas Wills, a man who's wrongly sunk into oblivion. The story is rich with intrigue, warfare, religious strife, and gorey blood transfusions. (Here's a page with more information about the book at my web site.) Oliver Sacks switched on my orbitofrontal cortex with a happy glow when he had this to say about the book: "Thomas Willis was the first man to come to grips with the human brain, to see how different parts of it had different functions, and how the human soul could be embodied in it. In Soul Made Flesh, Carl Zimmer gives a remarkable, beautiful account of England's 'genius century,' and of the intertwined lives of Willis and his contemporaries, Harvey, Boyle, and Hooke. Zimmer brings Willis and his intellectual journey to life--his prose, as always, is clear, vivid, and arresting--and reminds us how startling and revolutionary his discoveries were." I've got both paperback and hardback copies of the American and British editions on offer at my Amazon store. The only difference to speak of is the covers. All told, I've got 54 copies here for you. Both US and UK hardbacks are yours for $15, and both US and UK paperbacks are yours for $8. Below are the links to each kind--if you find that I'm sold of out of one edition, try another! --US hardback ($15) --UK hardback ($15) --US paperback ($8) --UK paperback ($8) And if you find they're all gone, bear in mind that the paperback edition is still in print. I can send you an autographed bookplate if you want--just get in touch.