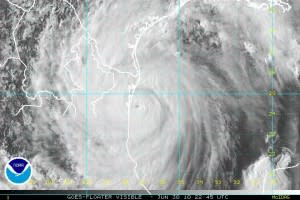 Anyone watching the pre-season forecasts, and now the weather, has to be pretty concerned about the hurricane season that we're heading into. Hurricane Alex, which just slammed the Mexico coast and caused over $ 1 billion in damage, set some troubling early season records. As the National Hurricane Center put it:

IT MAY BE OF INTEREST THAT ALEX WAS THE FIRST CATEGORY TWO...AND THE STRONGEST...HURRICANE TO OCCUR IN JUNE SINCE ALMA OF 1966.

In other words--climatologically, we're not used to getting storms this strong, this early. Alex's minimum central pressure dropped down to 947 millibars before landfall...and the maximum sustained wind speeds reached 85 to 90 knots. True, there have been stronger storms in June occasionally, but only very rarely. Get ready, in other words, for what could well be a very bad year...and that's not even mentioning the oil.