Something Stinks: Why Seabirds Eat So Much Plastic 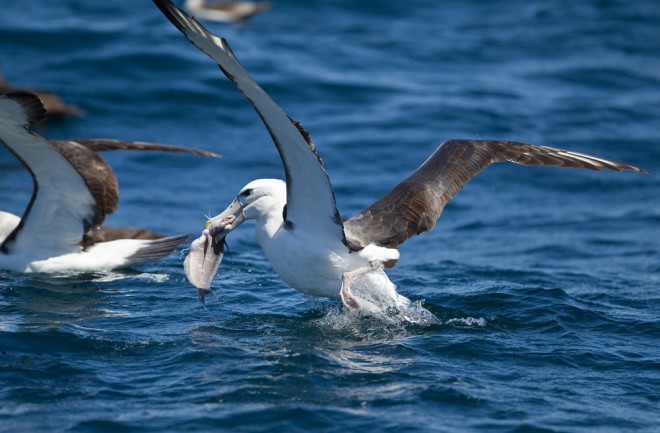 An albatross feeding. (Credit: Andrew M. Allport/Shutterstock) Our plastic waste is playing tricks on seabirds, and that stinks. When some species of seabirds dive down to snatch a tasty meal from the ocean's surface, they get a nasty surprise instead: a beak full of plastic. The consumption of plastic debris in the oceans by sea life who mistake it for food is a major problem for marine conservation, and researchers have recently discovered another confounding factor: To some birds, plastic doesn't only look like food, it smells like it too.

Many seabirds, like albatrosses and petrels, scour the open ocean for their meals. They rely not only on their sharp eyesight, but also on a highly developed sense of smell to find prey, and it is this sense that is leading them astray. Previous studies found that the birds pay attention to a specific chemical to trace potential sources of food: dimethyl sulfide (DMS), produced by phytoplankton when crustaceans, squid and other small marine animals are feeding. DMS serves as a kind of dinner bell for the birds, letting them know that their favorite prey are swimming below and drawing them in. Unfortunately for the birds, DMS is also produced by the algae that colonize pieces of plastic floating in the ocean. This tricks the birds into thinking that their prey are swimming below. To the birds, it smells just like another meal. But when they dive down to feed, instead of nutritious crustaceans they get a belly full of indigestible waste.

To test whether the plastic detritus littering the ocean's surface is actually producing DMS, researchers from the University of California, Davis filled bags with beads made from three common plastics and let them sit in the ocean for three weeks (the bags ensured that no sea life would eat the plastic). Sure enough, after testing them for the chemical every bead contained a DMS signature above the threshold detectable by birds. They combined this finding with an aggregation of 55 previous studies looking at how 25 different species of seabirds responded to plastic in the ocean and DMS. Compared to species that don't use DMS to find prey, the sulfur-sniffing birds were five times as likely to ingest plastic waste. The researchers looked at tube-nosed seabirds for their study, a family that includes albatrosses, petrels and shearwaters, although it's likely other marine predators use the same mechanism to find prey. They say that their findings match up well with previous evidence showing that some species of birds consume more plastic than others. The researchers published their research Wednesday in Science Advances. The two-pronged attack — visual and olfactory — is proving quite harmful to the birds. Plastic debris is mimicking the signals of a hunting technique the birds have used for generations, sending them mixed signals. The authors suggest that future conservation efforts could focus on producing plastics that resist the growth of algae, halting the false signals that draw in unsuspecting seabirds. For now, it's just a reminder that what seems appealing may end up hurting us if we're not careful.