Some Plants Are Sugar Junkies 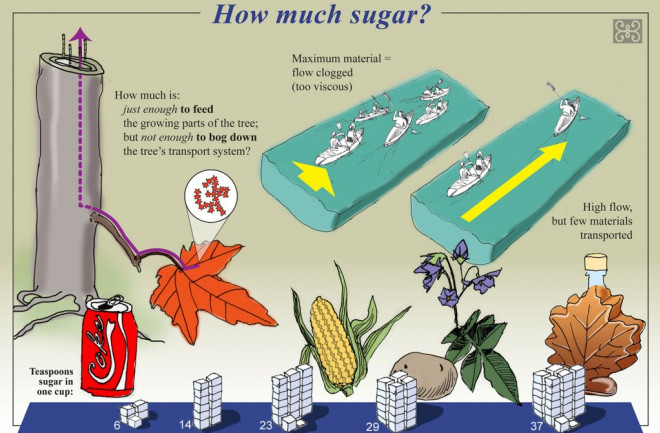 A plant's sap is responsible for transporting sugars from the site of their manufacture (the leaves) to growth centers (further up the branch or trunk of the plant). And the system has to strike a delicate balance: if the sap has a low concentration of sugars, there isn't much energy flowing to the plant; if, on the other hand, there are lots of sugars in the sap it becomes too thick to pump efficiently. It's a situation a lot like transporting any payload through a traffic artery, be that a paved highway or a canal with kayakers. So what's in a plant's best interest?

Researchers reviewed 41 species of plants and found that, though most plants have sugar concentrations of 18 to 21 percent, the optimal sugar concentration is a bit higher: 23.5 percent. That's pretty sweet---twice as sweet as a Coke, for instance (10 percent sugar). At the other end of the spectrum, maple syrup---a distillation of the watery maple sap---is quite viscous with a sugar concentration of 65 percent.

Interestingly, though plants have generally evolved towards the optimum, a number of unusually sweet plants exist. This group consists primarily of crop plants such as corn (40 percent sugar) and potato (50 percent sugar), the sugar junkies of the natural world.  These extreme concentrations may be an artifact of selective breeding.