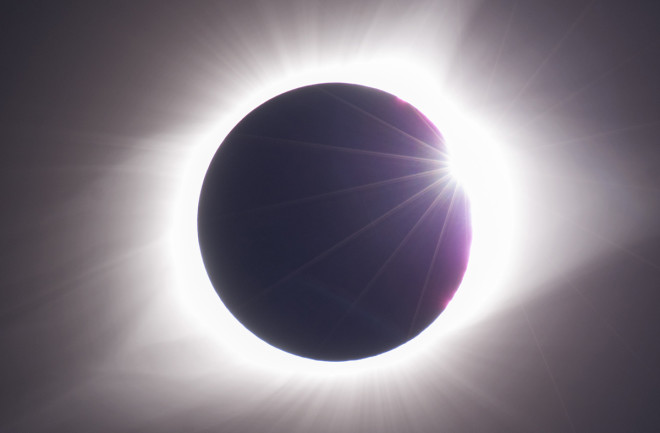 (Credit: Ernie Mastroianni/Discover) When the solar eclipse swept across the continental U.S. in August, it carved a subtle, but noticeable path through our atmosphere. For the first time, researchers confirmed that that moon's shadow generates a pair of bow waves in Earth's ionosphere, similar to the wake a boat leaves as it travels through the water. The waves are caused by the sudden drop and rebound in incoming energy from the sun, and they ripple through the atmosphere ahead of and behind the shadow. Bow waves are actually a fairly common phenomenon in nature — for a particularly stunning example check out the bow waves made by this runaway star.

In this case, it wasn't a physical object shoving the air aside and creating a wave, it was an energy gradient. If you've ever been present for a solar eclipse you probably noticed a sudden chill as the sun disappeared. This is because the Sun's rays were momentarily blocked, creating a dip in insolation, or the amount of solar radiation reaching an area. The lapse leaves a mark in the ionosphere, a region of our atmosphere beginning at about 37 miles up and filled with charged particles, or ions. The waves have been theorized to exist for decades now, but scientists didn't have equipment sensitive enough to actually confirm their predictions. This time around, however, they were ready. Using a network of approximately 2,000 satellite navigation receivers already stationed around the country, the researchers isolated the small disturbance from random fluctuations in the atmosphere. They detected changes in electron content in the ionosphere — bow waves— that lasted for about an hour and traveled at the same speed as the moon's shadow over the Earth, they write in research published this month in Geophysical Research Letters. They're not very energetic though, so they don't pose any danger to us here on the ground, and likely don't have much of an effect on the broader atmosphere. Finally observing the bow wave should give researchers a better idea of how the ionosphere behaves, as well as how it interacts with the rest of the atmosphere. Along with tests of general relativity and insights into the Sun's corona, it's just one more way that scientists were able to use the eclipse to do unique research.