So That's Why the Gate to Hell Is So Deadly 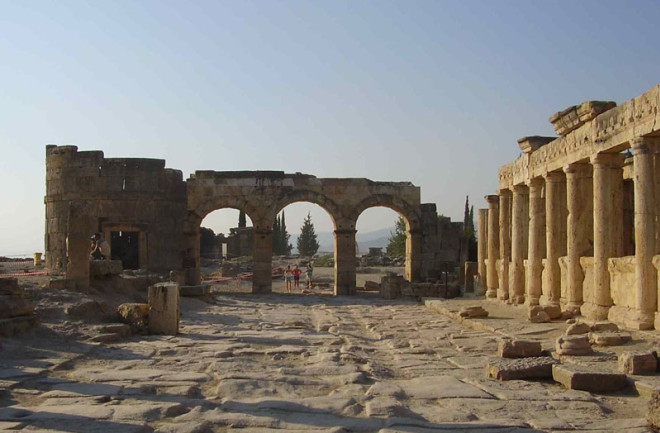 The main thoroughfare in Hierapolis. (Credit: Wikimedia Commons) If there’s a highway to hell, there’s probably a gate to hell—well, there is. It's located in what was the ancient Greco-Roman city of Hierapolis, which is now in modern-day Turkey. Called Plutonium after Pluto, the gate was thought to be an opening to the underworld. It was first described by the ancient Greek geographer Strabo and Roman author Plinius. When Strabo visited, he described a thick vapor that would overtake the gate. During religious ceremonies, the castrated priests who entered Plutonium would come out alive. But "bulls that are led into it fall and are dragged out dead; and I threw in sparrows and they immediately breathed their last and fell." For a while, we only had stories, but the gateway to hell was rediscovered a few years ago with dead birds near the opening. But what causes such strange happenings? Thankfully, another group of researchers set to find out, as described in a study released this week in Archaeological and Anthropological Sciences. https://youtu.be/T7rQZ1vNGqQ

After analyzing the gases below and around the gate, scientists found deadly concentrations of carbon dioxide — up to 91 percent. The CO2 being emitted from the mouth of the gate ranged from 4 to 53 percent, with lower amounts the higher you get from the ground. Carbon dioxide was emitted at such dangerous levels that the gas would kill you within a minute. So how the heck did the priests survive? Strabo thought, perhaps, the priests who dared to enter the Plutonium didn't drop dead because they were castrated. He also noted that the priests bent down, held their breath, and only went in so far. The lead author of the study, volcanologist Hardy Pfanz, thinks the priests just understood what was going on — they knew certain times of day were better to go down and were tall enough that the gases didn't reach them. They were also taller than the poor animals that entered the cave, and that probably helped them stay above the smothering vapor. “They … knew that the deadly breath of [the mythical hellhound] Kerberos only reached a certain maximum height,” Pfanz told

Scientists say those vapors are still released in amounts that can kill insects, birds and mammals. The gate is located in the Babadag fracture zone, an active seismic zone that originally created openings that allowed the carbon dioxide to escape the Earth. Even if you're curious, it's probably best to stay away from the gate to hell.