So, That Bulge on South Sister Volcano in Oregon is Growing Again

During the 1990s, a very subtle bulge grew on the west side of South Sister, near Bend in Oregon. It stopped growing by 2002, but now 20 years later, it has started growing again. 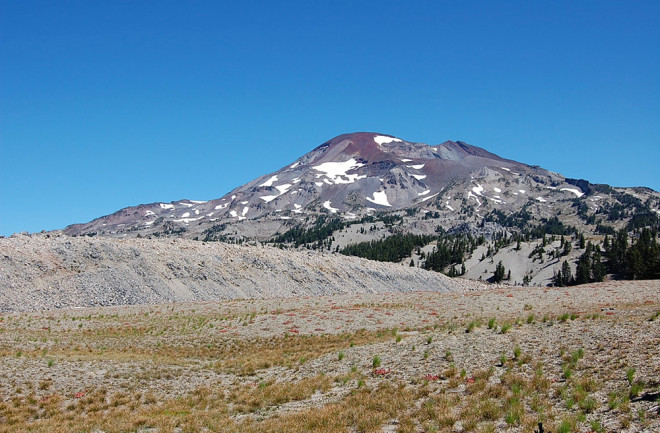 South Sister in Oregon with Rock Mesa in the foreground. Credit: Erik Klemetti

The Cascade Range in western North America are a remarkably quiet volcanic chain. Even though potentially active volcanoes stretch from Lassen Peak in the south to Garibaldi in the north, the only volcano to erupt in the past century is Mount St. Helens (twice). That's it. Compare that to places like Japan, Kamchatka, Indonesia and other volcanic arcs where it isn't uncommon for multiple volcanoes to be popping off simultaneously, the Cascades feel downright silent.

This is why the volcanological community get excited when something, anything, happens. The something that has everyone's attention right now is the return of the "bulge" on the west side of South Sister, part of the Three Sisters volcanoes west of Bend in Oregon. Based on satellite measurements (more on that below), parts of South Sister has risen about an inch (2.2 cm) since July 2021. That might not sound like much, but combine that with a few earthquake swarms in October 2021, December 2021, and January 2022 that could betray moving magma, and we got ourselves something to watch.

Map showing the renewed uplift at South Sister in Oregon since July 2021. Credit: US Geological Survey

Now, all this doesn't mean the USGS Cascades Volcano Observatory thinks anything will happen soon ... or at all. They have not changed the alert status from "Green", the lowest level. Even if this is magma moving, we have little clue to whether it is enough to cause an eruption ... or if any eruption could happen in the next few years or next few centuries.

This isn't the first time South Sister acted up. At the turn of the century, it became clear that the volcano showed signs of a bulge. Now, this wasn't like Mount St. Helens in 1980 when the side of that volcano expanded outwards hundreds of feet. This uplift on the west side of South Sister was an astonishing ... 5 inches (or 13 cm ... [sad trombone]).

Map and model of the 1995-2001 uplift seen at South Sister in Oregon. Credit: US Geological Survey

The uplift was so subtle it was only detected by satellite measurements of Earth's surface using radar called InSAR. This techniques compares two sets of data of the elevation of the surface measured by satellites and looks for "interference". When the surface as gone up or down between the two images, there is disagreement between the two images and we can quantify the change to see how the landscape is changing.

The uplift at South Sister likely lasted from 1995-2001, but things settled down afterwards (although a very small amount of uplift persisted). The interpretation of this bulge was that magma was intruding under Three Sisters at a depth of about 4 miles (6 kilometers). Models suggested that about 700 million cubic feet (~0.02 cubic kilometers) of magma may have intruded. That might sound like a lot, but it is actually a fairly small volume of magma.

The location of the "bulge" is notable because Three Sisters is kind of a nexus of different types of volcanism. There are the three composite volcanoes (North, Middle and South Sister) that have erupted everything from basalt, basaltic andesite, andesite, dacite and rhyolite. North Sister last erupted about 45,000 years ago, Middle about 14,000 years ago and South likely about 20,000 years ago.

However, it gets complicated. Just to the north is Belknap Volcanic Field, where basaltic lava erupted as lava flows only about 1,500 years ago. Just to the south and southeast are the Devil's Hills and Rock Mesa, rhyolite domes that erupted around 2,000-2,200 years ago. In terms of geologic time, that is yesterday.

The basaltic lava flows of Belknap Crater in the foreground with North Sister hiding underneath clouds in the background. Credit: Erik Klemetti

So, this leads to the real question: if magma is intruding under South Sister and if it leads to an eruption, what kind of eruption will it be? The most recent eruptions in the area were basaltic and rhyolite, so it could be either! The central Oregon Cascades are full of small, basaltic volcanoes like Belknap Crater or Sand Mountain. So, if that happens, expect lava flows and fountains, maybe like La Palma in the Canary Islands.

On the other end of the spectrum, the Devil's Hills and Rock Mesa are rhyolite domes that produced lots of ash and pumice. They are some of the youngest rhyolite eruptions in the Cascades and might be related to the Tumalo Volcanic Center, an enigmatic set of large, explosive eruption that likely came from between Three Sisters and Bend (I study these units!) So, maybe the next eruption could be new rhyolite domes that could send ash and pumice tens of thousands of feet into the skies.

A good friend of mine from graduate school and I have a long-standing bet about this very scenario. She lands on the basaltic side while I say it will be rhyolitic (note: there was nothing scientific to base this). More likely than not, this bulge will lead to nothing more than a little bit more magma filling in the depths beneath South Sister. However, just like any restless volcano, we will need to watch it carefully to see if the changes continue. If they do and get faster or get combined with other signs of an impending eruption, the Cascades might spring back to life.