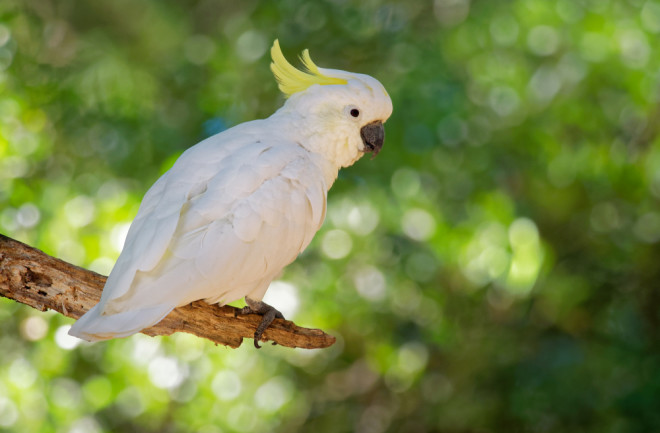 Whether it’s doing the twist, the moonwalk or flossing, people love to dance. Moving to music is a universal human phenomenon. But curiously, in the animal kingdom our need to bust a move is nearly unique. Not even primates – our closes evolutionary relatives – dance. Parrots are the only known exception.

The vocal birds have a couple of go-to dance moves. They bob their heads and lift their feet in rhythm to musical beats. Yet humans move their entire bodies when dancing in a grand array of gestures – twerking, anyone? Now researchers find a cockatoo named Snowball can boogie with the best using a repertoire of 14 dance moves.

“What’s most interesting to us is the sheer diversity of his movements to music,” Tufts University psychologist Aniruddh Patel, who led the research, said in a press release.

YouTube first brought the talented bird to Patel and colleagues’ attention more than a decade ago. Videos showed Snowball rhythmically bobbing his head and lifting his feet to the Backstreet Boys’ song “Everybody.” But researchers questioned whether he was imitating human movements. In a report published in 2009, the team documented Snowball’s dancing abilities. They found he synced his movements to the beat even when researchers changed up the tempo.

But after that study, the researchers noticed that Snowball was using new movement not previously seen — in fact, he seemed to be undergoing a spontaneous period of “movement exploration,” according to his owner, Irena Schulz. She goes on to note she doesn’t personally use the dance moves Snowball seemed to be trying out.

Snowball’s ability to spontaneously bust a move in response to music is something only parrots and humans do, as far as we know, and it may be because we share a unique set of traits. Parrots and humans are vocal learners that can imitate and learn complex, sequences of movements. We also tend to form long-lasting bonds. Patel and team suspect Snowball’s dancing has a social underpinning. They think he uses it as a way to interact with his human caregiver.

The team tracked the bird’s movements to classic dance jams like “Another One Bites The Dust” and “Girls Just Wanna Have Fun,” and found he employed a set of 14 moves. A full-body headbang and a side-to-side shuffle are just a couple of his new steps. He even combined a few moves, researchers report Monday in the journal Current Biology. Snowball bobbed his head and tapped his foot at the same time, for example. In some instances, the bird could have fit right in at a Metallica concert, headbanging with a foot raised high in the air.

Despite Snowball’s exceptional ability to cut a rug, the researchers aren’t sure how he and other dancing parrots on the internet acquire their moves. Yet, even if the birds are simply mimicking humans, the researchers say that would still be remarkable, since they are copying the behavior of an animal with an entirely different body shape. Another possibility is that the birds are creative. This would also be extraordinary as animals are usually only motivated to creativity by the prospect of finding food or a mate — neither of which mattered for Snowball. If the bird truly is being creative, he’s doing it for some other reason.