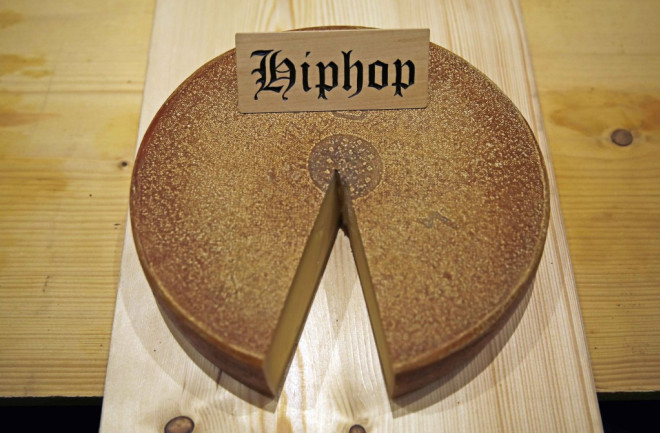 (Credit: Stefan Wermuth/University of the Arts Bern) “Cheese in Surround Sound” is the name of a fun culinary arts experiment that wrapped up last week in Switzerland. Wheels of cheese have been bathing in sound as they ripen over the past seven months to answer a strange question: “Do sound waves affect the metabolic processes in ripening cheese to the extent that a sono-chemical impact on taste and flavor can be detected.” The answer so far seems to be ... probably. The cheese wheels were continuously exposed to low, medium and high frequency sound waves, in addition to ambient, classical, rock, techno and hip-hop music (plus a control cheese, of course.) Notable differences in taste and smell were reported from multiple blind taste tests last week, conducted by a team of jurors including artists, chefs and politicians. Hip hop came out on top with a “softer, more floral taste” according to one cheese nibbler. “For chefs like me, these results are fascinating," Chef Benjamin Luzuy, from French-speaking Switzerland, said in a media release. "This opens up new avenues for us in terms of how we can work creatively with food in the future." A forthcoming biomedical survey will examine the composition of cheeses from the experiment. A selection of different cheeses will be exposed to hip-hop next, according to a cheesemaker named Beat Wampfler, who worked with the Bern University of Arts on the project.