SNAPSHOT: Dracula Ants Have Mandibles That Move at 200 MPH 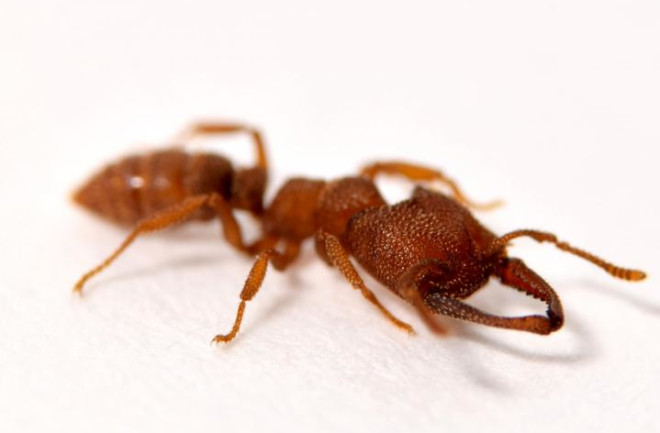 The mandibles of the Dracula ant, Mystrium camillae, are the fastest-known moving animal appendages, snapping shut at speeds of up to 90 meters per second. (Credit: Adrian Smith) Ready, set…CHOMP! With mandibles that snap at up to 200mph (90 meters per second) Mystrium camillae, otherwise known as a Dracula ant, now holds the new speed record for fastest known animal appendage, beating out the trap-jaw ant’s impressive 140mph bite. University of Illinois animal biology and entomology professor Andrew Suarez led the study that uncovered the new record, published in the journal Royal Society Open Science. High-speed video was used to record the mandibles in action, along with computer simulations and X-ray imaging to examine the ant’s anatomy in three dimensions. To make up for lack of muscle, arthropods like the Dracula ant have evolved appendage systems that work like latches, levers, and springs. This usually involves the three parts working in unison, but in the Dracula ant they are uniquely combined in the mandible. The ant powers up the appendage by pressing the two mandible tips together, spring-loading them for release when one mandible slides across the other — think of snapping your finger, with a whole heck of a lot more force. “The ants use this motion to smack other arthropods, likely stunning them, smashing them against a tunnel wall or pushing them away,” said Suarez in a press release. M. camillae is actually just one of a number of species of Dracula ant; most are found in Africa, though some live in Asia as well. They normally live in colonies underground, and their name comes from a creepily specialized feeding habit. Dracula ants don't chow down on their prey directly — instead, they feed prey to their larvae, who digest the food. The ants then chew a hole through their children's skin to drink their hemolymph, the insect equivalent of blood. Dracula ants indeed. There’s still a lot to learn about M. camillae, as the ants are fairly rare, and team plans on taking future research into field to study the creatures in their natural habitat. Find more great science imagery on our Instagram page.