Snapping the Yak: How an Iconic Photo Ended Up on Nepal's Currency

What started out as a research expedition ended with a rare photo of an animal that hadn't been spotted in decades. 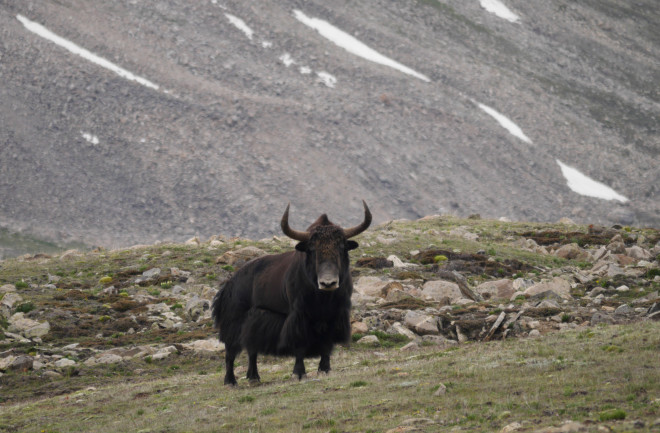 During a 2015 excursion to Nepal, University of Oxford wildlife researcher Geraldine Werhahn snapped this iconic shot of a wild yak. The animal hadn't been spotted in Nepal for over 50 years. (Credit: Geraldine Werhahn/Himalayan Wolves Project)

It was high up on the Plateau of Tibet in Nepal in 2015 — a six-day mule trek away from civilization — when Geraldine Werhahn took a photo so iconic that it now graces the country’s 5 rupee note. Werhahn, a zoology graduate student at the University of Oxford, had finally spotted a wild yak.

Yaks are nothing short of legends in Nepal. The domesticated variety of the bovine, which is smaller than its wild cousin, is a cornerstone of the country’s agriculture-based economy and is featured on the old 5 rupee note.

But no one had spotted a wild yak in Nepal in nearly 55 years, despite a 2013 expedition for that exact purpose, led by the Nepalese non-governmental organization Friends of Nature. During an excursion in search of wolves in 2014, Werhahn and her research colleague Naresh Kusi caught a glimpse of what may have been two wild yaks, but the animals disappeared too quickly to confirm.

In 2015, the researchers were back and lucky enough to find genetic proof of the animal. Kusi will soon publish the research, but it was Werhahn who captured the iconic shot. Here, she recounts the moment that brought the legend of the wild yak back to life.

In Her Own Words…

We’re in Gyau Khola, a valley high up on the Tibetan Humla Plateau in one of the most remote districts of Nepal. We had been walking for days over high mountain passes with mules carrying all our supplies. But the beauty of the place is worth all the physical effort.

One morning, I rise before everyone else to scan the landscape with my spotting scope for any interesting animal activity. Up the valley, more than 9 miles away, I see a dark little spot on the hill slope. My gut tells me this is a wild yak again.

I wake up the camp. We quickly have breakfast tea and start venturing up toward where I saw the tiny black spot, which we could no longer discern. We detour around the mountain to sneak up close to the animal before it can see us, and peek over the last little rise in the slope. Not far away, we see the majestic animal chewing on a bunch of grass. Meanwhile, Naresh and I take lots of pictures. But after a few seconds, the yak notices us and thunders away. We have no chance of catching up, but we still break out into cheers. What an exciting day — the rediscovery of wild yaks in Nepal! And as if to leave a present for us scientists, the animal left fresh droppings.

Based on these amazing sightings, and the DNA collected from the dung, Naresh has developed research materials meant to educate everyone from the international scientific community to the locals on the status of this animal in Nepal.

[This story originally appeared in print as "Money Shot."]