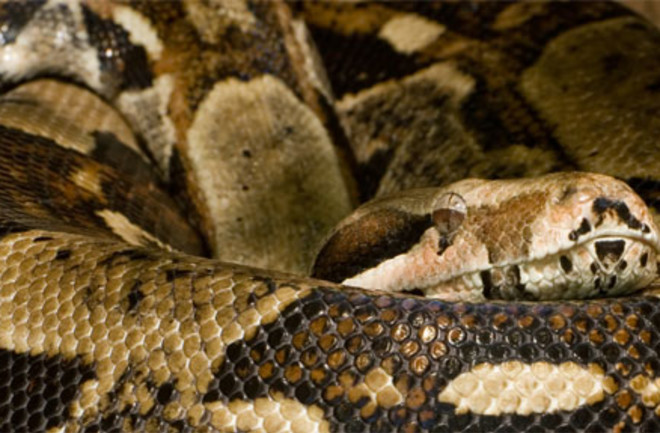 To fans of cheesy pop music, the beat of someone else’s heart is a symbol of romantic connection. To a boa constrictor, those beats are simply a sign that it hasn’t finished killing yet.

A constricting snake like a boa or a python kills its prey by suffocation. It uses the momentum of its strike to throw coils around its victim’s body. Then, it squeezes. Every time the prey exhales, the snake squeezes a little more tightly. Soon, the victim can breathe no more.

We’ve known this for centuries but amazingly, no one has worked out how the snakes can tell when to stop constricting. Scott Boback from Dickinson College has the answer. Through its thick coils, a boa can sense the tiny heartbeats of its prey. When the heart stops, the snake starts to relax.

It would be virtually impossible to measure the heartbeat of a live rat while it was being crushed by a snake, so Boback opted for a macabre alternative. He fitted the bodies of dead rats with artificial hearts – two tiny water-filled bulbs connected to a pump – and pressure sensors to measure the snake’s squeezes. In this way, he could isolate the influence of the heartbeats; he didn’t have to worry about other movements that might confuse the results, such as struggling muscles or panicked breaths.

Boback clearly showed that boas finely adjust their coils to the beats of their prey. If the artificial hearts were beating, the boas constricted the rats for twice as long and with twice as much pressure as when the hearts were still. And all the while, they kept on tightening, bit by bit. If Boback stopped the hearts after 10 minutes, the pythons stopped constricting a few minutes later.

Some of Boback’s boas had been caught in the wild, but others had been reared in captivity and had always lived on a diet of dead rats. They had never killed a victim with an actual heartbeat before, but they responded to the artificial beats in the same way as the wild snakes. They did, however, use less pressure than the wild ones. This suggests that constrictors have an innate ability to react to a victim’s heart, but experience tells them how strongly they should do so.

Squeezing the breath out of an animal takes a lot of energy. The snake’s metabolism can shoot up by seven times, and all the while, it’s vulnerable to attack. It would seem to make sense for the snake to precisely detect when its prey has breathed its last.

But there’s something about this logic that doesn’t quite add up. Birds and mammals need a lot of oxygen to fuel their burning metabolisms, and a constrictor should be able to kill them in just a few minutes. Is it really worth being able to sense a victim’s heart if all that does is save a few seconds of effort?

Boback thinks so. He speculates that the earliest snakes from the late Cretaceous period would have often fed on cold-blooded prey, which can cope for much longer without any oxygen. For example, a lizard like an iguana can slow its heart to just one beat every 5 minutes, and stay underwater for up to 4.5 hours. For such animals, the line between still and dead is much subtler, and constrictors would need more acute senses to be able to confirm the time of death.

There’s an alternative explanation. Perhaps the ability to sense the ground beneath their limbless bodies made it easier for early snakes to detect the life signs of their prey. A constrictor’s sensitive side may have evolved from sensitive sides.