Smells Like A Boy: Lemurs May Use Scent of Mother to Determine Baby's Sex 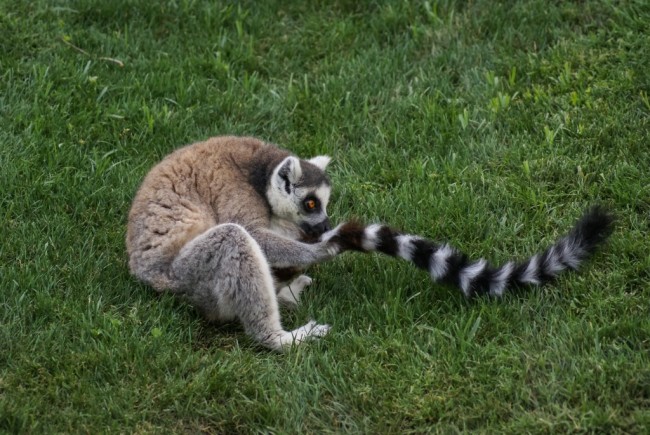 A long time ago, the great-great-great ancestors of humans and our relatives began to invest heavily in eyes. Sure, we have other senses — hearing, taste, touch — but primates excel at sight. There are lots of hypotheses to explain why eyesight was so evolutionarily valuable, from finding food to reading faces. But whatever the reason, vision became dominant, while other senses were left to languish, including our sense of smell. Primate olfaction is thought to be so miserable that scientists diminutively refer to our noses as "microsmatic" as opposed to the "macrosmatic" noses of dogs or rodents. But the more we study the noses of our kin, the more we realize how important scent is to primates. Our closest cousins — the monkeys and apes in the Haplorhini (which refers to the to dryness of our noses) — possess similar sniffers to us, but as you move away from our supposedly feeble-nared lineage, our relatives become better and better smellers. Our most distant primate cousins, the lemurs and other 'wet-nosed' primates (Strepsirrhini), have a heightened, almost un-primate-like sense of smell, and recently, scientists have come to appreciate just how much they may rely on information obtained by their noses. Lemurs use scents to tell who's who, mark territories, and send important signals about their health or social status. Lemur sex lives, especially, are very smelly. Lemurs can tell whether a given secretion comes from a male or a female, and if female, whether she's ready to make babies. Forget putting a female lemur on birth control — males will smell the difference, and lose interest. Now, scientists have discovered that not only does smell come into play before pregnancy, lemurs emit particular scents when they're expecting. These pregnancy odors are so unique that they can even be used to distinguish if the baby-to-be is a boy or a girl. Christine Drea, a professor of evolutionary anthropology at Duke, and co-author Jeremy Chase Crawford of the University of California, Berkeley, took scent secretions from female ring-tailed lemur genitals both before and during pregnancy. They then used gas chromatography and mass spectrometry to identify the compounds present in these potent perfumes, and compared pre-conception smells to those while carrying. Lemurs produce over 300 compounds that can alter their own special "eau de Lemur." Though many detailed comparisons could be done, including identifying the proportions of various chemicals in the odors, Drea noted that the results were so strong that a simple count of the compounds was enough to show marked differences. "There are differences in the compounds present, there are differences in the relative proportions of compounds present. But here, it's pretty big scale: there are actual differences in the total number of compounds," she said. Pregnant females had fewer numbers of compounds in their odors across the board. But the big surprise wasn't just that there were differences between pregnant and not-pregnant; just by looking at the number of compounds, the researchers could tell whether a female lemur carried a boy or a girl. The number of compounds was reduced in pregnancy in general, but if a female lemur had a boy inside, that number was even more greatly reduced. 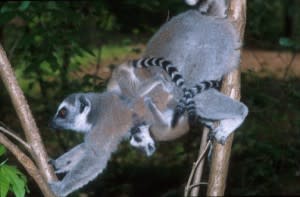 A lemur mother making a scent mark while her young cling to her. Photo by David Haring, Duke Lemur Center Drea and Crawford believe that the distinction between the odors is related to circulating hormones in the mothers. "When lemurs are pregnant with boys versus girls, their hormone profiles are very different," Drea explained. "There's no doubt. There's no overlap. A female carrying a son just has off the charts hormones." "What we are seeing is an inverse relationship between the concentration of steroid hormones and the number of chemical compounds," Drea said, "and we're proposing that there might be a linkage between those two." However, further research would be necessary to confirm their suspicion. The effect of hormones, though, would also explain previous results that hormonal birth control altered female lemur's scents enough for the males to take note. The magnitude of the differences between odors of not-pregnant, pregnant with a son, and pregnant with a daughter are well within lemurs' range of ability to detect, which suggests that the mothers and their lovers likely can smell the difference. "It's a big change," says Drea. "By all accounts, it's a change of a magnitude that lemurs have shown in other studies they're responsive to." "It would be very odd for them not to be able to smell it based on all of the prior experiments." 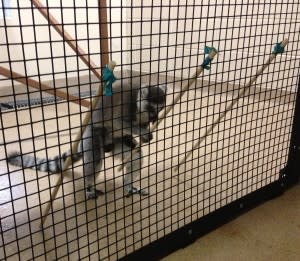 An example of how behavioral responses to smells are studied in lemurs. The different sticks carry different scents, and the lemurs' reactions to each are noted. But those reactions can be thrown off if the lemur is familiar with the individual that produced them. Photo by Christie Wilcox (me!) while visiting the Duke Lemur Center back in 2012. However, specific behavioral tests would need to be performed to determine if the lemurs react differently due the different fetal sexes. Unfortunately, such tests are unlikely to be performed any time soon because they require a population of lemurs that hasn't smelled each other before. The Duke Lemur Center has some of the only captive ring-tailed lemurs available for research, and unfortunately, their noses have been studied in such depth that they all know each other's smells too well. It's also possible that the lemurs don't note the difference in smell. "We were careful to use the word cue," Drea noted. "You use the word cue when there's information there, but the information might not be used in any particular way that serves a function." If lemurs were found to respond differently to the different odors, scientists would refer to the smells as 'signals' instead. In their discussion, the authors note that a change in smell during pregnancy doesn't just happen in lemurs. "A woman's scent changes when she's pregnant from when she's not pregnant," Drea noted, referring to previous research on — yes — humans. Those scientists did not look at the potential effect of fetal sex, so whether our smells differ when carrying boys versus girls has yet to be determined. But, Drea notes, rodents can tell the difference between related and unrelated women, for example — and so can we, actually. In fact, Drea thinks our noses may get more flack than they deserve. "I think people tend to underestimate just how good humans are at detecting certain smells," Drea said. "There's a lot of information encoded in odors, a lot of information that animals are responding to through odors, and as humans that are very visually-oriented, we tend to focus our studies based on questions having to do with something that is visibly apparent." "But the truth of the matter is there's a ton of information that is chemically encoded to which we, as primates, are sensitive. And we're still at the phase of understanding what all that information is." "We make a lot of generalizations in the human primate literature about what males do and don't know about a female's reproductive state," for example, says Drea. "There are a lot of theories built up on this assumption that if you can't see it, it's not there." But, she says, we tend to overlook our own nasal abilities as well as those of our relatives. "Primates," says Drea (and that includes us!) "are possibly much more effective olfactory beings than we've given them credit for." Citation: