Smarter than the average crow, or just equipped with a face for fishing? 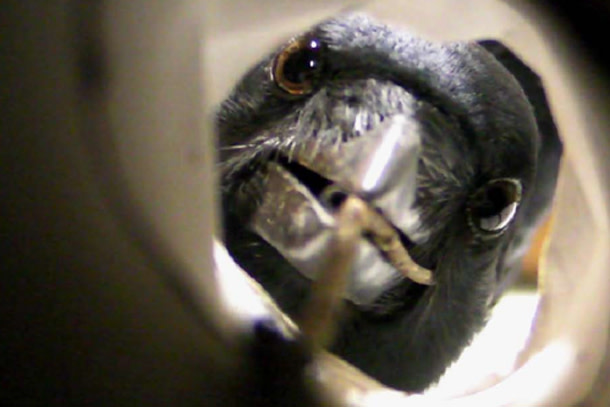 Our intelligence clearly surpasses those of our primate relatives, even though other apes and monkeys also rank within the highest tiers of animal smarts. Likewise, the corvids – the group of birds that includes crows, ravens, rooks, magpies and jays – have very sophisticated brains for birds, but one species reputedly outclasses the rest. It’s the New Caledonian crow. Found in a Pacific island, this crow wields tools in a way that none of its relatives can match. It uses sticks to “fish” for grubs buried in dead wood, and can chosen the right tool for different jobs, combine tools together, and improvise from unusual materials. These abilities have fuelled the New Caledonian crow’s reputation as the top of the corvid class – an unusually intelligent member of an already intelligent family. But what if it just has the right face? If I wanted to fish for a grub, I can use my dextrous hands while moving my face around so I can see what I’m doing. The crow only has its beak, which is attached to its face. But Jolyon Troscianko from the University of Birmingham has shown that it has two features that make the job easier: an unusually straight bill, and an extreme overlap between what both eyes can see. These physical traits set it apart from other crows and corvids, and give it an edge when using tools. Working with Graham Martin, an expert in bird vision, Troscianko gave an eye test to 6 corvid species, to mark out their zones of binocular overlap – the areas in front of their faces that both eyes can see. For New Caledonian crows, this zone has a maximum angle of 61 degrees. For all its kin, including ravens, rooks and jackdaws, (and indeed all other birds that have been studied), the zone was less than 50 degrees wide. To see how the crows use their extreme binocular vision in practice, Troscianko captured three wild birds and allowed them to fish for food at the bottom of a special tube. The tube contained an infrared camera that recorded the crows’ strategies. Each bird typically held its sticks in an angled grip, so it rested against one cheek. This makes the stick more stable, and thanks to its binocular overlap, the crow can stare down the stick towards its tips using both eyes. In the images below, you can see that the far eye has a clear view of the stick and isn’t obstructed by the bill. In fact, it’s virtually looking straight down the stick, giving it a perfect view of whatever the crow is trying to extract.

The crow’s beak helps too. It’s remarkably straight. Most other corvids have a slight curve to their top bill, particularly at its tip. This bend means that other crows have to hold their sticks at a cumbersome jutting angle, like a human hand holding a pen. By contrast, the New Caledonian crow, with its straight bill, can hold its sticks so that they rest just below its eye. Based on these experiments, it seems that New Caledonian crows have skulls that are well-suited for using tools. In an earlier study, Troscianko and Christian Rutz (a co-author on the new paper) showed that the presence of juicy, nutritious beetle grubs in New Caledonia may have driven the evolution of the crow’s tool-making prowess. Perhaps their skull shape followed suit, or maybe they already had physical quirks that predisposed them for a life of grub-fishing. But here’s the question: Is the New Caledonian crow’s vaunted talents due to some mental advantage, or simply down to its unusual head. Or to put it another way, if other corvids had the same skull, would they also be able to pull off the same feats of tool use? “That may be spot on,” says Martin. “Certainly we have conjectured among ourselves that this might be the case, but it would be very difficult to prove.” The rook, for example, doesn’t use tools in the wild but can do so in captivity. “This suggests that given the right circumstances, rooks have the cognitive ability to use tools, but they do not have the [physical] adaptations which we have identified to enable these cognitive skills to be expressed routinely in the wild,” says Martin. PS: This is not the first time that Martin’s group has discovered something deceptively simple about bird vision that nonetheless explains a lot. Earlier this year, they showed that vultures crash into wind turbines more often than other species because they have a massive blind spot in front of them when they fly. Reference: Troscianko, von Bayern, Chappell, Rutz, Martin. 2012. Extreme binocular vision and a straight bill facilitate tool use in New Caledonian crows. Nature Communications. http://dx.doi.org/10.1038/ncomms2111More on corvids: