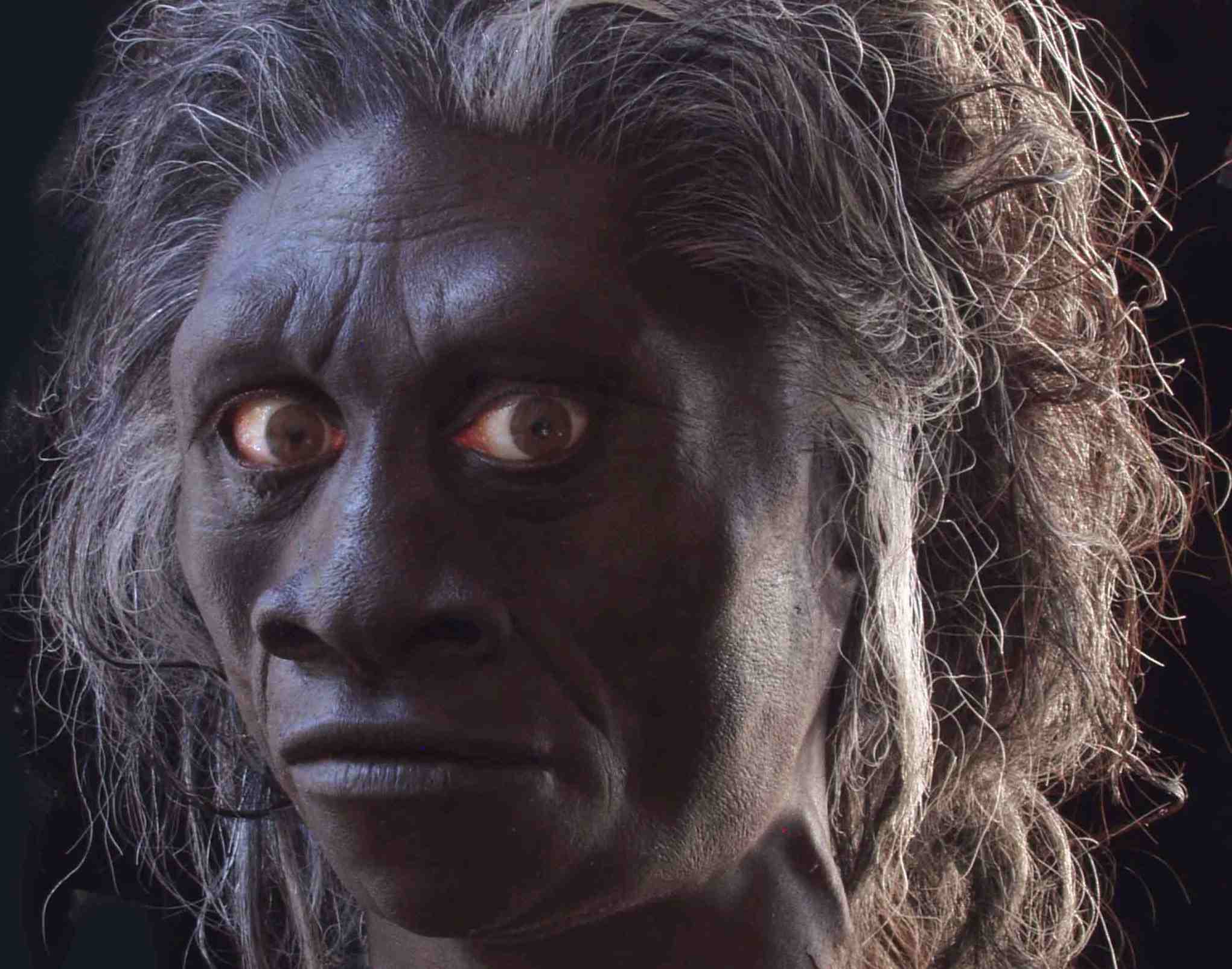 When we speak of the Hobbit, let us not forget her tools. Last year, scientists reported discovering fossils of a three-foot-tall hominid that they named Homo floresiensis, and which I can't keep myself from calling the Hobbit. Its bones turned up in a cave on the Indonesian island of Flores, dating from 97,000 to 12,000 years ago. The scientists argued that the Hobbit represented an ancient lineage of hominids, perhaps descending from Homo erectus, a human-sized species that existed in Asia 1.8 million years ago, or perhaps belonging to even an older lineage, known as australopithecines. Critics argued that the Hobbit was probably a fellow Homo sapiens. They generally focused their attention on Homo floresiensis's skull. Only one skull has yet been found, from an adult female. It's an odd skull at that, one that would have housed a strangely shaped brain a third the size of a normal adult human brain. As I wrote last week, the critics suggest that the Hobbit might have had a genetic disorder called microcephaly, which leads to very small heads. (The full repository of my Hobbit obsessions can be found here.) With all the attention currently being lavished the Hobbit's head, it's easy to forget all the other things that have come out of the same cave. Scientists have found various chunks from its jaws, arms, and other bones, which have lots of weird features. These features suggest a separate species, the Hobbit team argues, not a deformed human. There's a continuity that you can trace from the oldest bones to the youngest, a span of over 80,000 years. The critics haven't had much to say on that point, although it's only fair to point out that their output so far has been a few short papers. Longer rebuttals are in the works. And then there are the tools. Tools were actually what got the paleoanthropologists excited about Flores in the first place. In 1994 they found tools dating back roughly 800,000 years at another site on the island. The scientists speculated that the tools were made by Homo erectus that had gotten from Java across a wide expanse of open water to Flores. Whether they traveled by boat or tsunami-driven tree was an open question. The discovery spurred an intense search of the island for fossils of the toolmakers. The scientists found the much younger Hobbits instead. But along with the fossils, the scientists also found more tools. In the initial reports on Homo floresiensis last year, the scientists reported that the tools spanned the oldest to youngest deposits where fossils had been found. Bones of dwarf elephants also found in the same layers suggested that the Hobbits were using the tools to hunt--perhaps even attaching the stone blades to sticks to make spears. As for the older tools, the scientists only said the identity of their creators would have to remain a matter of speculation. Skeptics from the start wondered whether the Hobbits had actually made the tools. Paleoanthropologists Marta Mirazón Lahr and Robert Foley wrote a commentary for Nature on the initial papers last year in which they pointed out that

elsewhere such implements are associated with H. sapiens, and their contrast with tools found anywhere with H. erectus is very striking. One could speculate that modern humans, who were dispersing across southern Asia between 100,000 and 50,000 years ago, may have made the tools, and come across these creatures.

Others argued that a hominid with such a tiny brain could not have possible made or used such sophisticated tools. 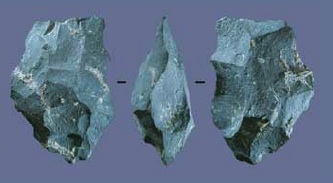 In tomorrow's issue of Nature, the Hobbit team takes on the skeptics yet again. They've analyzed all the old tools from Flores--the original 1994 cache and another trove that turned up not far away in 2004. (This picture shows the front, back, and side view of one of the 2004 finds.) New dating shows that some of these 507 tools date back at least 840,000 years ago. The scientists compared them to the 3626 younger tools found with the Hobbit bones. The scientists found that the two sets of tools share many things in common. They were typically made from volcanic rocks found along rivers. The tool makers knocked off bits from these rocks in a similar fashion, creating a front and back face and sharpening the edges. In some cases they seem to have used anvils--setting their tools-in-the-making on other rocks before banging on them. Both sets of tools include distinctive kinds of tools, such as "perforators" with a long spike extending from a rounded base. The simplest explanation for these similarities, the authors conclude, "is the stone artefacts from Mata Menge and Lui Bua [the old and new tool sites] represent a continuous technology made by the same hominin lineage." They argue that the notion that the new tools were produced by humans, as floated by Lahr and Foley, doesn't fit the evidence. They point out that the oldest indisputable fossils of Homo sapiens on Flores are 10,500 year old. Along with those bones, tools have been found that don't fit into the continuum from Mata Menge to Lui Bua. They include grinding stones and other tools never seen in older sites on Flores. And along with tools, humans arriving on Flores also made beads and formally buried their dead and left lots of other evidence of a very different mental make-up from Homo floresiensis. It makes more sense that humans showed up on Flores only after the Hobbits became extinct (perhaps during a volcanic eruption) and brought lots of new tools with them. As for the claim that small-brained Hobbits couldn't possibly have made the tools found with them, the scientists argue that this is an assumption cloaked as a conclusion. Inevitably, this study raises more questions than it can answer at the moment. I for one found myself thinking a lot about the size of the tools. Hobbits were small, and they had small hands. If Hobbits descend from Homo erectus, then they must have shrunk from a height of five to six feet to just three. On the other hand, if they descend from australopithecines or some other small lineage, then they might have arrived on the island already small. Would the size of the proto-Hobbits have been reflected in the size of their tools? 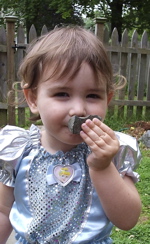 To visualize this matter, consider my Hobbit-sized daughter Veronica. She's holding a rock that is about the size of an old Flores tool. I didn't try to make a perforator for her, since I'm a lot clumsier than your typical Pleistocene hominid. Even if I had managed to make one, I doubt my wife Grace would have looked kindly on giving little girls sharp rocks. And it must be clearly stated that Homo floresiensis almost certainly never wore a Cinderella outfit. Snow White maybe, but never Cinderella. The rock fits pretty well in her hand, I must say. Did this mean the old hominids of Flores were Veronica-sized? I sent an email to Adam Brumm of Australia National University, the lead author of the paper who did much of the analysis for his Ph.D. "The stone tools from Mata Menge and Liang Bua are basically the same size - all quite small," he replied. It's possible that the old hominids were already small, or that they were big but kept their tool kits light. Brumm pointed out that Homo floresiensis may have carried rocks some distance from rivers before turning them into tools. Those rocks would have been much larger, but that doesn't necessarily mean that the early inhabitants of Flores must have been big. After all, chimpanzees are short but extremely strong. "There may well have been limitations on the maximum size of the stone artefacts H. flo could conveniently manipulate given their small hands but you would have to find a way to test this," Brumm wrote. "H. flo might not be much bigger than your daughter, but if they were twice as strong or more than a full grown man imagine her flinging a sledge-hammer around the room and the constraints on tool handling become less apparent." When Veronica starts throwing Legos around, I'll just try to remember that it could be worse. I could be dodging sledgehammers.