On Nicobar Island, in the Indian Ocean, a most unusual hunting party is searching for food. Through the branches of the forest, the tiny Nicobar treeshrew scuttles about searching for insects. They're followed by the racket-tailed drongo, a small bird that picks off juicy morsels flushed out by the foraging treeshrews. So far, this isn't unusual - many distantly related animals forage together, either because they net more food or because they can watch out for predators.

But this alliance has a third an altogether more surprising member - a sparrowhawk. This bird of prey is five times larger than either of the other two species and can easily kill treeshrews. But it doesn't - instead, it only deploys its talons on other prey that are disturbed by its partners.

Predator and prey species don't usually fraternise with each other outside the confines of animated films, but this alliance is unique. The drongos and sparrowhawks will actively seek out the treeshrews and stay with them in consistent formations over long periods of time. If you spot a treeshrew, there's a 71% chance that there's also a drongo around, and a 43% chance that a sparrowhawk is too. 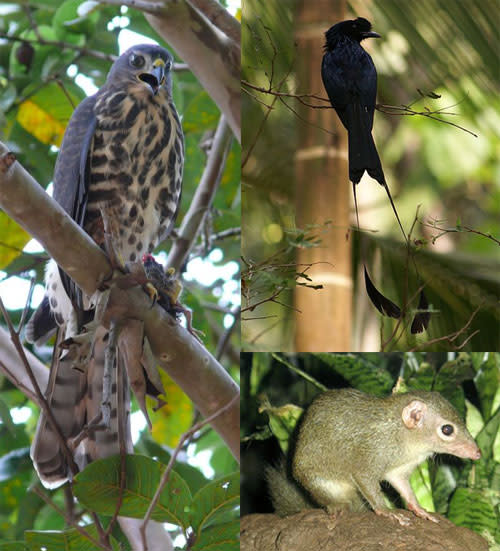 Meera Anna Oomen and Kartik Shanker discovered this strange coalition and they suspect that it's engineered by the drongos. Certainly, sparrowhawks aren't traditional companions for treeshrews. On their own, these mammals keep their distance from the raptors for their own safety and are extremely vigilant. But with the drongos around, they tolerated the hawks and allowed them to get a couple of metres closer. The hawks, meanwhile, appear to use the drongos as a way of finding treeshrews.

Birds of prey are unusual participants in foraging groups. When they join another species, as is the case with double-toothed kites and capuchin monkeys, it's usually one relatively big enough that it couldn't be a possible meal. That clearly doesn't apply on Nicobar Island.

Nonetheless, the hawks, and certainly the drongos, seem to get a good deal out of their partnership. Oomen and Shanker think that they find more food when they follow treeshrews (although the data on this are still limited). Why a bird of prey should stray from its typical hunting technique is unclear, but it may be that the treeshrews simply aren't a possible target with the drongos around.

It's unclear how the treeshrews benefit from this coalition, or whether they simply can't avoid the pursuit of their partners. Certainly, Oomen and Shanker found that in the drongos' presence, their foraging rates fell by around two-thirds. Drongos are notorious food thieves, and this was abundantly clear if there were two of them around - in these situations, the treeshrews often turned on them and chased them away.

Ironically enough, the treeshrews may get protection from predators by having the drongos act as intermediaries. These small birds are incredibly vigilant and especially so when hawks are around. Even though a hawk is actively following the treeshrew, the drongo may be able to warn it if the predator partner decides to pull a double-cross, or if another predator flies in from outside the group.