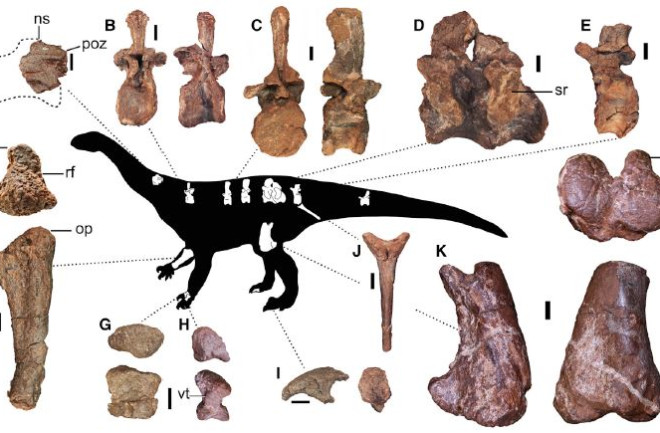 Dig this big new dino, Ledumahadi mafube, which appears to have been the largest land animal of its time. (Credit: McPhee et al 2018)

They’re among the most iconic of dinosaurs: the sauropods, long-necked, long-tailed herbivores that evolved into the largest land animals the planet has ever seen. They were essentially the cows of their day. Very, very big cows. But they didn’t start out that way. A new dinosaur unearthed in South Africa reveals there are more plot twists to the sauropod story than we thought.

Ledumahadi mafube, the “giant thunderclap at dawn,” weighed in at about 12 metric tons, or upwards of 26,000 pounds. That’s only about a fifth as big as the largest dino-cows, which show up much later in the fossil record, but let’s be real: That is still one big animal.

What makes Ledumahadi significant isn’t just bulk, however. It’s also body plan. The large dinosaur was a sauropodomorph, a precursor to sauropods, and reveals it was possible to obtain enormous size much earlier, and without key anatomical adaptations, than thought.

The very earliest sauropodomorphs were bipedal, getting around on two legs, and many paleontolologists believed their initial body plan limited their size. The extreme size seen in the later sauropods was only possible, the thinking went, because they had already evolved adaptations to support that much weight.

Ledumahadi roamed what’s now South Africa about 200 million years ago, in the earliest years of the Jurassic Period. And while sauropods had four column-like limbs to support tremendous amounts of weight, similar to elephants today, Ledumahadi had flexed limbs.

(Sidenote: flexed limbs are not the same as the sprawling limb posture of reptiles and, hilariously inaccurately, some past dinosaur depictions. Rather, they’re limbs with a greater range of motion, seen in, for example, most less-than-a-ton mammals today.)

The particular suite of anatomical traits Ledumahadi had, unique in the fossil record, offers more evidence that quadrupedalism evolved multiple times and multiple ways among sauropodomorphs, including in lineages, like Ledumahadi’s, that dead-ended before evolving into proper sauropods.

The team also calls Ledumahadi the largest land animal of its time, attaining a size previously thought impossible based on its anatomy. It joins 10-ton Ingentia prima, announced in July, as the latest sauropodomorphs to show scientists there was more than one path to greatness.

A growing body of evidence in the fossil record suggests that multiple lineages of sauropodomorphs, some of which evolved into the largest dinosaurs, may have evolved from two- to four-legged animals. (Credit: McPhee et al 2018)

A growing body of evidence in the fossil record suggests that multiple lineages of sauropodomorphs, some of which evolved into the largest dinosaurs, may have evolved from two- to four-legged animals. (Credit: McPhee et al 2018)