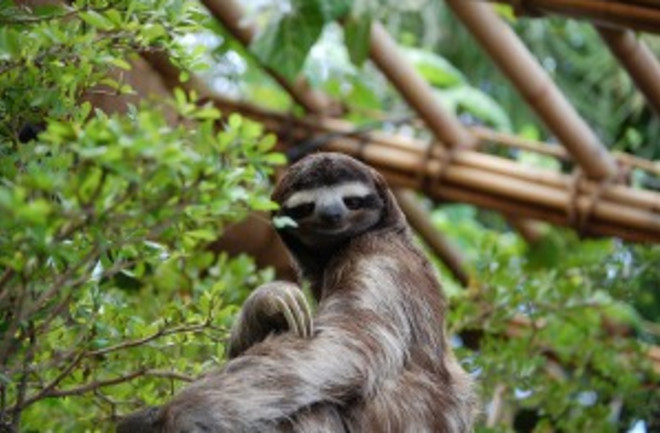 Photo: flickr/SergioDelgadoWhen looking for new chemicals to fight disease, nothing beats the variety of bio-active compounds found in complex environments. But what do you do when you've already sampled the most diverse environments known? Well, you look for new complex ecosystems, preferably very different from those already sampled. This paper describes the medical properties of compounds found in one such crazy environment: the complex ecosystem found in the hair of giant sloths. It turns out that a huge number of different kinds of fungi live in sloth hair, and these organisms make molecules that can inhibit the growth of a number of disease-causing microbes. Yet another reason to love sloths.Sloth Hair as a Novel Source of Fungi with Potent Anti-Parasitic, Anti-Cancer and Anti-Bacterial Bioactivity. "The extraordinary biological diversity of tropical forests harbors a rich chemical diversity with enormous potential as a source of novel bioactive compounds. Of particular interest are new environments for microbial discovery. Sloths – arboreal mammals commonly found in the lowland forests of Panama – carry a wide variety of micro- and macro-organisms on their coarse outer hair. Here we report for the first time the isolation of diverse and bioactive strains of fungi from sloth hair, and their taxonomic placement. Eighty-four isolates of fungi were obtained in culture from the surface of hair that was collected from living three-toed sloths (Bradypus variegatus, Bradypodidae) in Soberanía National Park, Republic of Panama. Phylogenetic analyses revealed a diverse group of Ascomycota belonging to 28 distinct operational taxonomic units (OTUs), several of which are divergent from previously known taxa. Seventy-four isolates were cultivated in liquid broth and crude extracts were tested for bioactivity in vitro. We found a broad range of activities against strains of the parasites that cause malaria (Plasmodium falciparum) and Chagas disease (Trypanosoma cruzi), and against the human breast cancer cell line MCF-7. Fifty fungal extracts were tested for antibacterial activity in a new antibiotic profile screen called BioMAP; of these, 20 were active against at least one bacterial strain, and one had an unusual pattern of bioactivity against Gram-negative bacteria that suggests a potentially new mode of action. Together our results reveal the importance of exploring novel environments for bioactive fungi, and demonstrate for the first time the taxonomic composition and bioactivity of fungi from sloth hair." Related content: NCBI ROFL: Why you shouldn't make figures while high on drugs. NCBI ROFL: The wonders of koala poop revealed! NCBI ROFL: Frequency of pubic hair transfer during sexual intercourse.