Slivers of Science in Homer's 'The Odyssey' 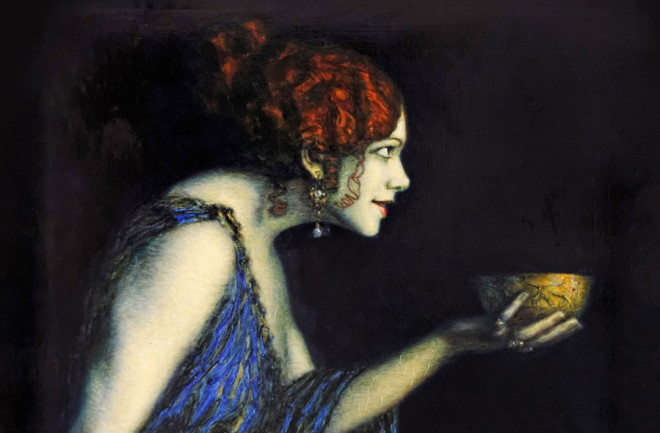 The Sorceress Circe dosed Odysseus’ men with a drug derived from a plant that likely exists in the real world, and not just in the classical legend. Masterpics/ALAMY

For millennia, mythology has served as a vessel for passing down traditions and knowledge in countless cultures. Sometimes, though, these tales seem a little too tall, especially those of magic that transforms men into beasts. But if you examine them closely, there are some slivers of truth, and they might actually be based in science.

Among the most famous of these myths is part of Homer’s The Odyssey. During their wanderings, Odysseus and his crew arrive at the island of Aeaea. Starving and exhausted, they split into two groups to search for resources, and one group stumbles upon a palatial home. A beautiful woman emerges and welcomes the men inside for a feast. All but one of them follow her.

This is no ordinary woman. This is the sorceress Circe — fabled daughter of the goddess of magic, Hecate — and as she prepared the feast for the men, the story says she:

… made for them a potion of cheese and barley meal and yellow honey with Pramnian wine; but in the food she mixed baneful drugs, that they might utterly forget their native land. Now when she had given them the potion, and they had drunk it off, then she presently smote them with her wand and penned them in the sties.

After the men drank Circe’s potion, they morphed into pigs (above). The plant Circe used could have been Datura stramonium, or jimson weed. Chronicle/ALAMY

Terrified by what he sees, the one crew member who did not enter Circe’s home races into the wilderness to tell Odysseus of the horrible incident that transformed the men into pigs. Determined to rescue his men from this witchcraft, Odysseus travels through a forest to Circe’s home. Along the way, he encounters a young man who reveals himself to be Hermes, a god most often thought of as a messenger deity but who was also associated with healing. Hermes, aware of potential danger, digs up a plant in a nearby meadow and hands it to the hero, saying:

Here, take this potent herb, and go to the house of Circe, and it shall ward off from thy head the evil day. And I will tell thee all the baneful wiles of Circe. She will mix thee a potion, and cast drugs into the food; but even so she shall not be able to bewitch thee, for the potent herb that I shall give thee will not suffer it.

What is most intriguing about the text is that it is specific about where Hermes’ medicine comes from and what it looks like. Odysseus says:

So saying, [Hermes] gave me the herb, drawing it from the ground, and showed me its nature. At the root it was black, but its flower was like milk. Moly the gods call it, and it is hard for mortal men to dig; but with the gods all things are possible.

True to the god’s word, the moly renders Odysseus invulnerable to Circe’s magic. He drinks her potion, eats her food and stands there as she points her wand at him. However, when she tells him to join his friends in the pigsty, he resists the spell and rushes her with his sword.

Without the mention of drugs being mixed into the food, it would be easy to shrug off such a myth as the stuff of pure imagination. However, that Circe’s power seems to stem from a knowledge of poisons suggests something real might be behind the tale.

Datura stramonium, part of the nightshade family, this plant can cause amnesia, hallucinations and delirium when consumed. Wellcome Library, London

One of the most common arguments is that Circe was feeding the crew jimson weed. While that sounds innocent enough, Datura stramonium, as it is known in the scientific world, belongs to the deadly nightshade family and contains high levels of anti-cholinergic alkaloids such as scopolamine, hyoscyamine and atropine. These compounds block the neurotransmitter acetylcholine from interacting with its receptors in the brain. When this neurotransmitter is blocked, we can’t distinguish reality from fantasy, we exhibit bizarre behavior, and we can suffer pronounced amnesia. “Patients who consume this stuff often have vivid hallucinations and become seriously delirious,” says Harvard Medical School toxicologist Alan Woolf.

One academic analysis of the anti-cholinergic alkaloid cocktail sums things up rather nicely: “No other substance has received as many ‘train wreck’ negative reports [with] the overwhelming majority finding their experiences extremely mentally and physically unpleasant and not infrequently physically dangerous.”

Circe was likely using Datura and not some other poison for two reasons. First, jimson weed is found all over the classical world. Second, The Odyssey makes it clear that Circe expects the crew to forget their fatherland. More specifically, she is expecting an amnesia-like effect on par with what Datura actually causes.

As for her use of the wand, the earliest pottery depicting Circe does not show her pointing the wand at the men but rather mixing poison into food with it. Given this art, a case can be made that the wand in the original story was not a wand at all but an ordinary stirrer that ultimately came to be drawn as a magical object rather than an everyday kitchen utensil. Or perhaps the wand was just a theatrical prop to punctuate Circe’s power.

It’s fascinating that, over the centuries, this role of the wand in magic has not changed much. In one of the core texts that many modern stage magicians read while in training, Professor Hoffmann’s Modern Magic, the wand is described as an ideal prop for distracting the eyes, for granting an excuse to close the hand and hide something within it, and to provide the illusion of having real magical power.

Based on Homer’s description, many experts think the “potent herb” Hermes gave Odysseus as a cure to Circe’s potion was actually the snowdrop plant. Scientists have studied the plant and found that it contains properties that protect brain cells from damaging toxins. Wellcome Library, London

Yet Datura is not the only real-world element found in The Odyssey. In 1951, during the Cold War, pharmacologist Mikhail Mashkovsky at the Russian Academy of Science discovered that villagers in the Ural Mountains used what could be the protective plant Hermes gave Odysseus. The villagers were rubbing ground-up snowdrop flowers into their skin as a pain reliever and using the snowdrop plant as a medicine to help children afflicted with polio to fight off the paralysis that was so often caused by the dreaded disease.

Fascinated by this, Mashkovsky and colleague Rita Kruglikova-Lvova explored the effects of a compound extracted from snowdrops on the muscles of frogs, rabbits and guinea pigs, and the brains of rats. This experimentation led the researchers to conclude in the late 1950s that the compound could protect specific neurotransmitters from being damaged by diseases and toxins.

The snowdrop compound galantamine was soon registered as Nivalin in Bulgaria in 1959, and from there it began its slow journey into the West. Today, the drug is proving more valuable than ever in the battle against Alzheimer’s disease.

First described in 1907 by the German psychiatrist Alois Alzheimer, the disease is vicious and progressively destroys memory and cognitive function. In the late 1970s, a team of researchers found that people who died of Alzheimer’s commonly had brains deficient in acetylcholine, the same neurotransmitter that Daturablocks.

This discovery paired well with reports that the most common brain deficit found in Alzheimer’s patients was cholinergic in nature and led several research groups to argue that the disease arose from an inability to transmit signals across cholinergic synapses. Galantamine’s ability to protect acetylcholine seemed perfect for staving off the effects of Alzheimer’s, and it is now widely used for this purpose.

Could this be Homer’s moly? In 1981, as the drug’s origins started to become better known, neurologists Andreas Plaitakis at the Mount Sinai School of Medicine in New York and Roger Duvoisin at Rutgers Medical School in New Jersey proposed at the Twelfth World Congress of Neurology that snowdrop might have been the plant that Hermes handed to Odysseus.

To support their argument, they pointed out that the plant was commonly found in Greece, that it grows in forest glens like the one visited by Hermes, and that it is an effective antidote to Datura. They also noted that its petals were milky white and that it had a darkly pigmented root just as the moly described in The Odyssey. Moreover, galantamine is not like many other anti-cholinesterases that break apart and become useless in the body rather quickly. Galantamine endures, producing a lasting protection that prevents acetylcholine from being blocked, which would have made it perfect for the situation Odysseus found himself in.

Did the Greeks really know that snowdrop could stave off neurotransmitter-attacking poisons and diseases? I suspect they did. There isn’t a lot of direct evidence, but Theophrastus, a Greek writer from the fourth century B.C., writes in his text Historia plantarum that moly “is used as an antidote against poisons.” This knowledge must have been woven into stories long ago and transformed from history into legend and from legend into myth in most parts of the world. What is wonderful is that the myth lives on.

For example, it makes a cameo in the 2007 film Stardust. The evil witch in the tale tries, and fails, to harm the hero, Tristan, with her dark magic. The reason for her failure? He was wearing a milky-white flower on his coat. The species looked familiar, so I pulled up the script, and sure enough, there was its name:

Girl: You shouldn’t buy the bluebells. Buy this one instead. Snowdrop. It’ll bring you luck.

If snowdrop was Homer’s moly, over the ages it was almost forgotten. For the sake of those suffering from Alzheimer’s, I’m glad Mashkovsky found its powers before they were completely lost to the ravages of time.

Does this mean that Odysseus and Circe were real? In the literal sense, I doubt it. However, a talented female poisoner who used her knowledge to lead natives to worship her as a demigod might have been living on an island. At some point in history, someone might also have learned that consuming snowdrop provided protection against certain diseases and poisons. A local hero might have known a thing or two about herbalism, stood up to a cruel poison-wielding witch, proved that he was resistant to her magic, and come to be known as the great-grandson of Hermes . . . and wouldn’t that be cool?

Copyright © 2015 by Matt Kaplan. From the forthcoming book Science of the Magical: From the Holy Grail to Love Potions to Superpowers by Matt Kaplan to be published by Simon & Schuster Inc. Printed by permission. [This article originally appeared in print as, "Rooted in Truth."]