Slime Molds Are Picky About Where to Eat, Despite Being Brainless 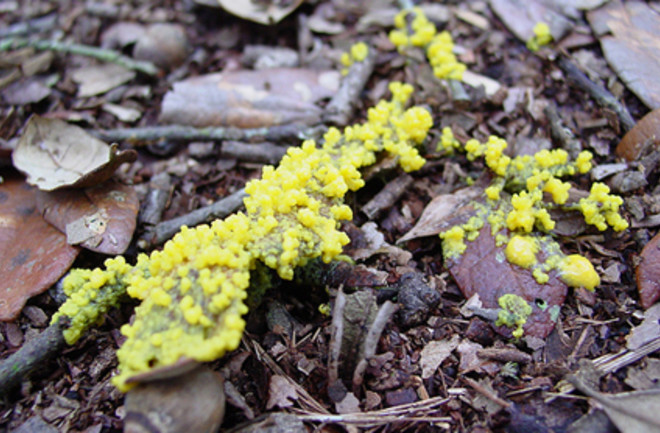 Slime molds have been popping up in the news quite a bit lately. A few weeks ago, they made headlines by mimicking the Japanese rail system. Now, a paper published in the Proceedings of the National Academy of Sciences shows that slime molds can make complicated choices about the amount and variety of nutrients they eat. It might not seem like a big deal that an organism—whether mold, mouse, or man—can make complex decisions about how to feed itself. Except that they have no brains. These amoeboid creatures have no specialized center dictating all their actions. So, as they spread across a landscape, they have no "mission control" to which to report their nutritional requirements. In the recent study, scientists placed 11 different foods around the outside of a Petri dish, each with a different protein-to-carbohydrate ratio. They then plopped a slime mold into the center of the dish. The researchers found that the slime mold altered its growth pattern and migrated to contact the foods that provided it with the best proportion of nutrients. That’s a pretty great feat of coordination for a blob without a brain. Speaking of which, the last time a slime ball got this much attention, The Blob was sweeping through 1950’s drive-ins. For now, I wouldn’t be worried—there have been no reports of bloodthirsty slime molds terrorizing quaint suburban neighborhoods. But don’t underestimate the slime. It’s smarter than you think. Related Content: 80beats: Brainless Slime Mold Builds a Replica Tokyo Subway