A hoard of worn bronze Roman coins (below) and metalworking remains unearthed in northern England suggest that Britons in the first century A.D. had found a crafty way to exploit their rulers' newfangled monetary system. "Most of the 70 coins are so worn down that markings are illegible, so they literally had no face value," says an archaeologist at the University of Newcastle, Lindsay Allason-Jones, who is analyzing the cache. But enterprising locals apparently made sure those coins didn't go unused. Traces of bronze on metalworking waste located nearby indicate that the Brits melted down the coins and refashioned them into trinkets to sell back to the Romans. 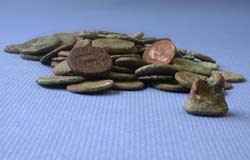 Photograph courtesy of University of Newcastle Upon Tyne.