Sliced: The Fish That Fishes

The anglerfish is equally nightmarish, mysterious, and interesting.

More than a mile beneath the ocean’s surface there is no sunlight, but the darkness does not reign undisturbed: Anglerfish and other bioluminescent animals cast an ominous glow in the sea’s deepest reaches. They live in water that hovers just above freezing and that exerts pressures of thousands of pounds per square inch. The mysterious and bizarre-looking anglerfish, which bear names like triplewart sea devil and wolf-trap anglerfish, sport remarkable adaptations that allow them to thrive where shallow-water fish would instantly perish. Although anglerfish are notoriously difficult to collect and study, scientists are steadily learning more about their biology and their evolutionary origins. Earlier this year an analysis of mitochondrial DNA conducted by researchers in the United States, Japan, and Taiwan estimated that the first anglerfish appeared about 160 million years ago, during the Jurassic Period, and quickly diversified as they spread into habitats ranging from shallow waters to the continental shelves to the harsh deeps. Today 321 species swim the waters of the world. 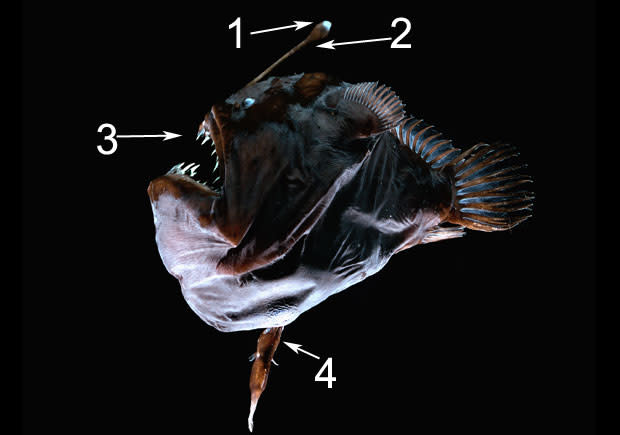 1. AND THERE WAS LIGHT Most deep-sea anglerfish lures glow with light that is generated by an enzyme called luciferase. Some species make the light themselves, while others harbor colonies of luminescent bacteria that do the job for them. In addition to attracting prey, the fish’s blue-green radiance may attract mates and ward off predators.

2. GONE FISHING Over millions of years of evolution, the front-most spine of the anglerfish dorsal fin developed into a fishing rod with fleshy “bait” dangling at the end. The creature floats passively and wiggles its rod until a prey fish approaches. This lie-in-wait strategy was long suspected and finally confirmed in 2005 by a remotely operated underwater vehicle that captured some of the first footage of an anglerfish in the wild.

3. THE BETTER TO EAT YOU WITH When the anglerfish’s jaw opens, it creates suction that pulls her victim inside. In some species, retractable teeth spring down, trapping the meal. An expand­able stomach can hold fish larger than the anglerfish herself. High-speed cinematography from the University of Washington has revealed that anglerfish can pop open their mouths in just four milliseconds.

4. CLINGY RELATIONSHIPS The male anglerfish chomps down on the female, which may be 25 times his size, and never lets go. His circulatory system fuses with hers, and all of his own organs—except for his reproductive system—shut down. He siphons off nutrients from his mate and in return provides a permanent sperm bank. At just 6.2 millimeters long, a swamp-dwelling male anglerfish from Southeast Asia, first described in 2005, is currently regarded as the world’s smallest vertebrate.