DNA sequencing confirms the skeleton unearthed in a parking lot to be that of Shakespeare's infamous villain: Richard III. 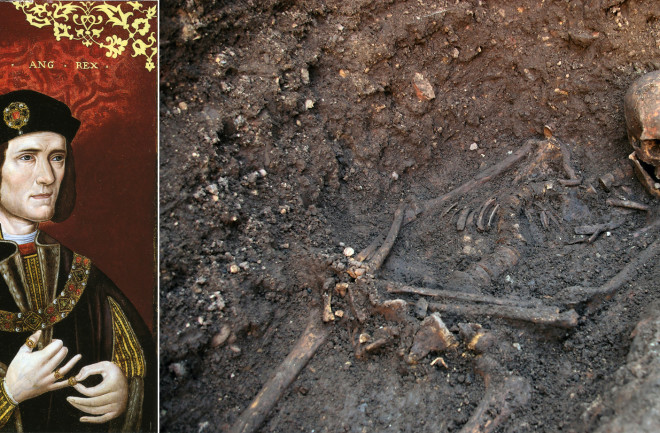 The skeleton of King Richard III was unearthed from beneath what is now a parking lot in Leicester, England. The skeleton (right) proved he had severe scoliosis and died of a blow to the skull. DNA from a tooth confirmed that the bones were indeed his.  | The National Portrait Gallery History of the Kings and Queens of England by David Williamson; University of Leicester

With persistence — and advances in DNA sequencing — researchers conclusively identified the long-lost skeleton of Richard III, former King of England and one of Shakespeare’s more infamous villains.

Richard, who usurped the throne, was killed in battle in 1485. He was buried under a church in Leicester, and historians disagreed about whether his remains were later dug up and discarded in the river, destroyed with the church or left to decay.

Researchers at the University of Leicester and a group of Richard III enthusiasts spent two years scouring ancient maps and excavating what is now a parking lot to find a skeleton they thought to be his.

Radiocarbon dating and skeletal analysis confirmed basic facts: Died around 1485? Check. Death from a blow to the skull? Check. The skeleton’s severe scoliosis also jibed with historical accounts of the king as “crook-backed.”

The final evidence: Archaeological geneticist Turi King extracted DNA from a tooth and compared its sequence to samples from two of Richard III’s living relatives, 17 generations down the line. She confirmed the link.

Two groups are vying over the right to rebury the remains.

[This article originally appeared in print as "The Return of the King."]