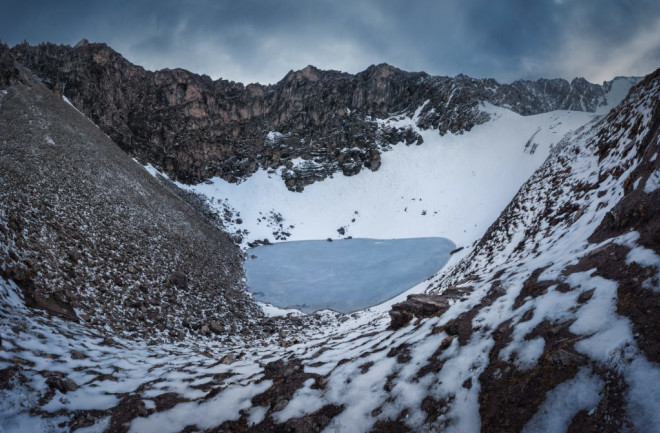 At the mysterious Skeleton Lake in northern India, the dead are talking, revealing surprises through centuries-old DNA. And it’s not what anyone expected.

New research suggests the site is not the scene of a single natural disaster that killed hundreds, as once thought. Skeleton Lake’s emerging truth is far more mysterious. The human bones littering its shores appear to belong to people from across Eurasia, who met their end in multiple incidents spanning a thousand years.

More than 16,000 feet above sea level, tucked between the Trisul Massif and another towering Himalayan peak, Nanda Ghunti, Roopkund Lake is a lonely place. It’s frozen most of the year. The nearest village is a three-day trek by foot.

Roopkund earned the name Skeleton Lake because it serves as the resting place for more than 200 people, their disarticulated bones visible for a brief period each summer when the snows recede.

The lonely lake is a well-known landmark along a multi-week Hindu pilgrimage, Nanda Devi Raj Jat. The pilgrimage, which winds across the mountainous region once every 12 years, dates back to perhaps the 16th century, and may have started as early as the 8th century. People living in the area have long known about Skeleton Lake.

It wasn’t until 1942, when a ranger reported them to British authorities, that the skeletons drew international interest. And the speculation began.

The shores and slopes of the shallow alpine lake are littered with human bones. (Credit: Himadri Sinha Roy)

Many Bodies, Even More Theories

Over the next several decades, historians, storytellers and armchair detectives, among others, have offered up wildly different explanations for the bodies.

According to local legend, the bodies are those of a king, his wife and their entourage, struck down in a hailstorm while on pilgrimage. British military authorities who learned of the bodies during World War II worried they might have been part of a secret Japanese invasion force. Other theories include locals caught in an avalanche.

Once modern science got involved, the picture of what happened at Skeleton Lake become no clearer.

Some previous research on a sampling of bodies suggested everyone who died at the site perished in a single incident that occurred about 1,200 years ago. Because many of the individuals had impact injuries to their skulls and upper bodies, the leading suspects for the cause of the deaths were an avalanche, rockslide or hailstorm. These events are relatively common in the area, and, during intense storms, hailstones the size of large rocks have been recorded in the general region.

A popular theory circulating in various media outlets suggests two groups were present: short-statured locals, perhaps working as porters, and taller people closely related to each other, with ancestral roots in what’s now Iran. Perhaps the unfortunate party was a wealthy family relocating with the aid of locals they had hired to help them across the difficult terrain.

Still other theories include victims of an epidemic, perhaps quarantined there to die, or merchants who lost their way and succumbed to the elements.

In 2018, an analysis of 27 skull fragments from Roopkund confirmed that the dead included male and female adults, from about age 20 to older than 50. The study found changes in the bone — increased porosity, specifically — that suggested the individuals had been malnourished for some time. Fracture patterns also confirmed earlier studies that suggested several of the skulls had experienced some kind of blunt trauma. The injury was not necessarily enough to kill the individual, but perhaps enough to render them unable to seek shelter or avoid hypothermia.

One of many arrangements of human bones on the shores of Roopkund, where snow covers the site ten months of the year. (Credit: Pramod Joglekar)

Reported today in Nature Communications, a new team sequenced the ancient DNA of 38 individuals from Skeleton Lake, determined their time of death using radiocarbon dating, and analyzed their bones for additional clues.

The surprising results add several new wrinkles to the mystery of Roopkund: Individuals who died there represent at least three genetically distinct groups and perished in multiple incidents stretching over a thousand years.

Among the 38 in the group, 15 were female and 23 were male; as the authors note, if the group were a military party, as some theories have suggested, there likely would have been fewer females. The sequencing techniques used, which were more advanced than in previous studies, found no evidence of family units among the individuals analyzed.

The majority of the individuals, 23 of them, have genetic signatures consistent with South Asians, but the authors note no single regional signature dominates. South Asia is a massive and genetically diverse area that today typically groups together Afghanistan, Bangladesh, Bhutan, India, Nepal, Pakistan and Sri Lanka (some definitions include the island nation of the Maldives).

All of the South Asian individuals appear to have died at Roopkund generally around the year 800, but not in one incident. Deposition of the bodies appears to have occurred during at least two events.

Fourteen other individuals, however, are of Eastern Mediterranean ancestry. Specifically, they appear to be most likely of Greek ancestry. The final individual, a male, appears to be of East Asian ancestry. All 15 of these people, men and women, died at the lake around the year 1800, likely at the same time.

You Are What You Eat

Our diets leave telltale chemical signatures in our bones, recording what we’ve eaten in broad strokes, over the last decade or so. Using isotopic analysis, which identifies these and other environmental chemical signatures, the team found 37 of the 38 individuals analyzed fell into two groups that matched their genetic signatures. (Due to lack of data, one individual could not be analyzed.)

The Eastern Mediterranean people, and the lone individual of East Asian ancestry, appeared to have eaten a diet rich in wheat, barley and rice, as well as animals that also ate those grains. While these plants are typical in much of Eurasia, they are less common in South Asia.

In contrast, the South Asian group had a much more varied range of dietary signatures, with many apparently eating millet or animals raised on millet, a common grain in the larger region.

The authors of the new research describe their findings as “unanticipated” — which is about as close as you’ll get in a measured, peer-reviewed research paper to “what the hell?”

The team makes no mention of cause of death, other than that an epidemic was unlikely because they found no sign of pathogens preserved in the bones.

The researchers suggest that the South Asian individuals may have perished in the 8th or 9th centuries during two or more of the pilgrimages that wind through the area every 12 years. It’s plausible that the events drew people from far outside the region, as they do today. It’s also easy to imagine visitors to the unyielding mountains arriving ill-prepared for severe weather and unaware of warning signs of approaching storms, or avalanche and rockslide hazards.

The 15 individuals from the Eastern Mediterranean and East Asia present a bigger riddle, acknowledge the authors. The 14 potentially Greek individuals, men and women, were not related to each other. Although their genetic signatures align most closely with Greek ancestry, the chemical signatures suggest they did not eat much fish, hinting they may not have lived in a maritime environment, at least in the decade or so before their deaths. Even less is clear about the lone East Asian individual, though there are some genetic hints the person may have had Southeast Asian ancestry.

It’s pure speculation, but since Skeleton Lake was well known to pilgrims for centuries, perhaps one of them, traveling the wider world, told other adventurers about the site. Curious, they might have set off to see it for themselves — only to end up adding their bones to the grim collection.

We may never know the full story of those who died at Skeleton Lake. As the area has become more popular with trekkers and tourists, some visitors are contaminating the area with trash and taking bones as souvenirs, a final indignity to the hundreds who met their end in this forbidding corner of the world.

Two living humans on the far side of the lake provide a sense of scale at Roopkund. (Credit: Pramod Joglekar)
1 free article left
Want More? Get unlimited access for as low as $1.99/month
Subscribe