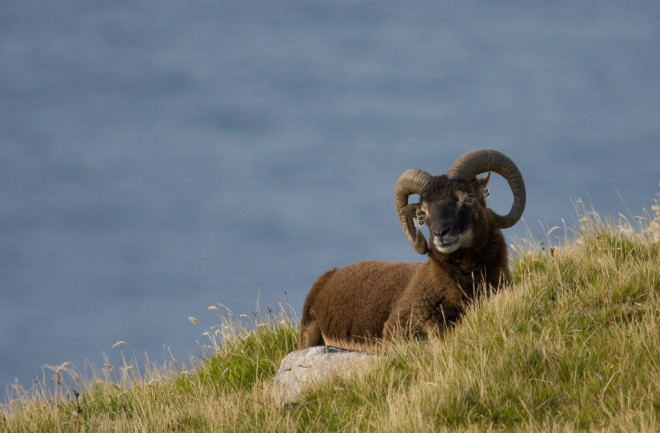 Soay ram on the island of Hirta, St Kilda. Image by Arpat Ozgul As the old adage goes, too much of a good thing... is an even better thing. At least, that's what a lot of animals seem to think---males often evolve elaborate ornaments to impress females, the crazier the better. But in some cases the theory doesn't hold up---for instance, in the Scottish Soay sheep. Males with bigger horns are more able to woo the lady sheep and fend off competitors. But why, then, are there still small-horned males around? Researchers finally think they know the answer to this head-scratcher, and may thus have a clue to how such sexual selection works in other animals too.

For the last two decades, researchers have been studying a population of 1,750 Soay sheep (Ovis aries) on an island off the coast of Scotland. Each year they tracked three things: reproductive success (number of offspring), survival (whether or not the animals make it through the year) and a combination of these two factors, which they called overall fitness. The researchers also analyzed the sheep's genes and found that horn size is mainly controlled by a single gene called RXFP2. There are two different versions, or alleles, for this gene. The researchers found that the HO^+ allele gives a male sheep larger horns, resulting in higher reproductive success. The other allele, called HO^P, gives a male smaller horns---but, fascinatingly, this version comes with its own benefit:a better chance of surviving.

Since every sheep has two of these genes, one from each parent, natural selection and sexual selection are essentially duking it out in each individual sheep's RXFP2 gene. When sexual selection wins, the male has two HO^+ alleles---he will be lucky with love but less likely to survive year to year. When natural selection pulls ahead, a male ends up with two HO^P alleles, and although his puny horns may prevent him from scoring with the ladies, there's a good chance he'll be around next year to try again. Researchers found that the sheep with the best overall fitness were actually those with one of each allele: they had both good reproductive success and good odds of survival, according to the study in Nature today. But because these males could still pass the small-horn allele to their offspring, as long as his female mate also contributed a small-horn allele, their male offspring would be born small-horned. This is the first time that evolutionary biologists have been able to give empirical evidence for this phenomenon in the sheep. Elaborate sexual ornaments often involve a trade-off for the individual: for instance, being more conspicuous to predators. But this is a rare case of a population-level trade-off, in which Nature happened to tidily package the dilemma on a single gene.