Silk cages preserve vaccines and antibiotics for months without refrigeration 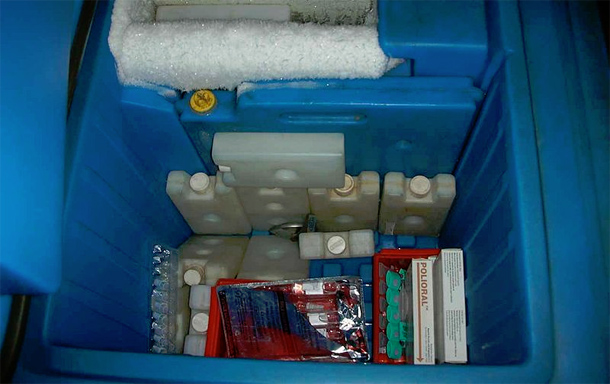 Here is an unfortunate clash of circumstance. Vaccines and antibiotics become useless in heat, but the countries where they are most needed – poor ones where infectious diseases are a major cause of death – are really hot. Because of this, millions of dollars are spent on keeping vaccines cold and millions of lives are affected when they can’t be. The factory that makes a vaccine can be continents away from the arm of the child who will receive it. Those distant points are separated by the “cold chain” – a network of refrigerators, freezers, insulated vehicles, cold boxes, specially equipped depots, and trained personnel. If the chain fails, and vaccines are allowed to heat up, they rapidly and permanently degrade. This happens even in developed countries, but it’s a huge problem for developing ones, where electricity and refrigeration can be sparse luxuries. If there was a way of stabilising vaccines so they can withstand high temperatures, it could save millions of both lives and dollars. And Jeney Zhang, a graduate student from Tufts University, has developed one possible method: wrapping vaccines and antibiotics in molecular cages of silk. Within these prisons, the MMR vaccine and two common antibiotics were still viable after months at high temperature. Matt Cottingham, a vaccine specialist from the University of Oxford, says, “The stability is amazing. No one’s even come close to that. It’s certainly better than anything else that’s currently being used.” Silk is no stranger to medical applications. Spewed from the salivary glands of silkworm caterpillars, this natural fibre is strong, flexible and biodegradable. It has been used to make surgical sutures, medical implants, and replacement tissues. It can also be used to imprison small molecules. Individual silk molecules come together to form a structure with tightly organised regions, interspersed with looser “pockets”. In these pockets, molecules can be shielded from the elements. Zhang, working in the lab of silk maestro David Kaplan, showed that silk can stabilise two antibiotics – penicillin and tetracycline – as well as the measles, mumps and rubella (MMR) vaccine. Wrapped in silk, penicillin spent a month at 60 degrees Celsius with no loss of activity. Normally, it breaks down after a few weeks at room temperature (25C), or just a day at human body temperature (37C) – a month at 60 is unheard of. Tetracycline is even more delicate. In silk, it lost 20 per cent of its activity after a month at 60C, and was unharmed at lower temperatures. The MMR vaccine fared similarly well. The vaccine consists of weakened versions of the viruses behind the three diseases. They are shipped as a freeze-dried powder, which has to be dissolved in a special solvent before being injected. If the powders are kept at 45C, they become completely useless within 20 weeks. If the viruses are wrapped in silk before being freeze-dried, they stay almost good as new, keeping at least 85 per cent of their original potency after 6 months, no matter the temperature. Put it another way: at 37C, it would normally take 9 weeks for the viruses to lose half their original potency, but it takes 94 weeks if they are encased in silk. How does the silk protect its payload? It’s not clear. The silk may protect the viruses in the vaccines from enzymes that would otherwise destroy the proteins on their outer shells. Without those proteins, the immune system has no way of recognising what the virus looks like, or preparing itself for future infections. The silk might also act as a physical barrier that constrains the viral proteins and stops them from deforming at warmer temperatures. And it could keep water away from the vaccines. There’s clearly still a lot of basic questions left to answer, not least, as Cottingham asks: “Would this be compatible with being injected into babies?” Kaplan expects so. “Silk has been used in medical devices, such as sutures, for decades and the FDA approved it for new medical products more recently,” he says. It’s a promising first step towards making the cold chain a little less brittle. Reference: Zhang, Pritchard, Hu, Valentin, Panilatitis, Omenetto & Kaplan. 2012. Stabilization of vaccines and antibiotics in silk and eliminating the cold chain. PNAS http://dx.doi.org/10.1073/pnas.1206210109Image by GiveWell