'Siberian Unicorn' May Have Walked Alongside Humans 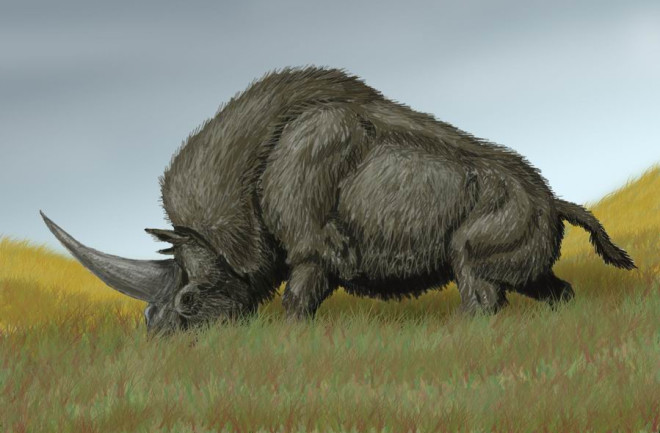 An artist's reconstruction of Elasmotherium sibiricum. (Credit: DiBgd/Wikimedia Commons) With a new discovery, paleontologists have found evidence that a Siberian "unicorn" likely walked the earth at the same time as humans. Lest visions of graceful white horses with golden, spiraled horns prance through your mind, let's first establish that this beast is anything but. Much closer to today's rhinoceroses than horses, Elasmotherium sibiricum was a gray, hulking creature with a single defining feature: a massive horn rising from its head. It was thought that these creatures died out roughly 350,000 years ago, but new evidenceindicates that the horny beasts were around much longer than that — existing as recently as 29,000 B.C.

First discovered in the 19th century by Russian paleontologists, the animal, whose name means "thin plate beast," roamed the Eurasian steppes starting sometime around 2.5 million years ago. It was an herbivore and could weigh up to five tons and grow up to twenty feet long. The impressive horn, which could likely grow up to five feet long, was used for self-defense and digging for food, among other things.

Researchers from Tomsk State University found a well-preserved skull belonging to a Siberian unicorn near the village of Kozhamzhar in modern-day Kazakhstan. They published their findings in the American Journal of Applied Sciences. The horn from this particular specimen, unfortunately, was not recovered. Researchers think that the individual was part of a group of sibiricum that managed to survive far into the Pleistocene by inhabiting a refugium, or an area protected from environmental disruptions, where it was able to outlive the rest of its species. While the new age range overlaps with dates of human habitation in the area, it is unknown if our ancestors interacted with them. The researchers who first discovered it are said to have based its name on legends of a giant unicorn roaming the area in ancient times. Whether that unicorn was large and gray and looked like a rhinoceros, we'll perhaps never know.