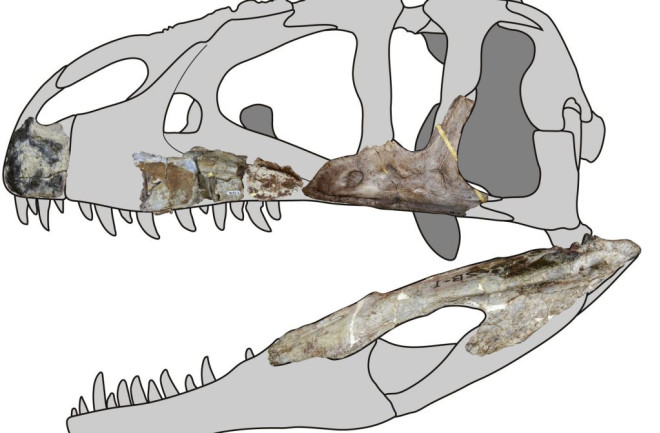 A reconstruction of the predatory dinosaur’s skull based on partial fossils of Siamraptor suwati. (Credit: Chokchaloemwong et al. 2019)

Siamraptor suwati joins the ranks of predatory dinosaurs known to science — and it’s the first of its lineage from Southeast Asia, giving its discovery greater significance.

When it comes to bitey dinos, most people think of T. rex and velociraptors (thanks, Jurassic Park…). But if toothy terrors are your thing, you should really get to know the carcharodontosaurs.

The lineage’s name — which translates as “shark-toothed lizard” — is a clue to the dinosaurs’ trademark feature. But carcharodontosaurs were also a super successful bunch of meat-feasting beasts found on most of the continents, millions of years before T. rex or velociraptors showed up.

The two species belonging to the genus Carcharodontosaurus, which lived in Africa about 100 million years ago, are arguably the most famous members of the shark-toothed tribe. Both animals may have reached lengths of nearly 50 feet.

Some researchers believe another carcharodontosaurid, Argentina’s Giganotosaurus, was even bigger: It may have been the largest land-based predatory dinosaur ever, beating T. rex by a nose (or a toothy snout).

(By the way, that’s not a typo. You may have heard of Gigantosaurus, a name given in the 19th century to large plant-eating dinosaur fossils from England, but South America’s Giganotosaurus was definitely no plant-eater.)

Even the smallest known carcharodontosaurs had estimated lengths of 20 feet or more.

And sure, it’s fun to imagine a world where carnivorous dinosaurs bigger than your mom’s Suburban were a thing, but what made the carcharodontosaurs particularly impressive was their distribution. They’ve been found in the Americas, Africa, Europe and parts of Asia.

One place they hadn’t been found, until now, was Southeast Asia (at least, conclusively — a single upper jaw fragment from Thailand was assigned to Carcharodontosauridae, genus undetermined, in 2012).

Which brings us to Siamraptor. Paleontologists found partial fossils of at least four individuals in northeastern Thailand, deposited in sediment that’s about 120 million years old. Although the fossils are somewhat fragmentary, there was enough material to determine they belonged to a carcharodontosaur from the middle of the Early Cretaceous.

The name of the new genus, Siamraptor, is a nod to its Thai homeland where, in life, it probably reached lengths of about 26 feet. That’s not the biggest of the carcharodontosaurs by a long shot, but certainly nothing you’d want to come face to face with.

It’s not size that makes Siamraptor a big deal, in fact. It’s the animal’s geologic age and location.

After analyzing the fossils, the paleontologists concluded that it’s a basal member of the lineage — one of the earliest carcharodontosaurs to go its own way, evolutionarily speaking. And it’s of the same age as other carcharodontosaurs in Europe and Africa.

All that tells us this highly successful lineage of meat lovers had a global distribution earlier than expected, making them even more successful than we thought.

Siamraptor makes its debut today in the open-access journal PLOS ONE.