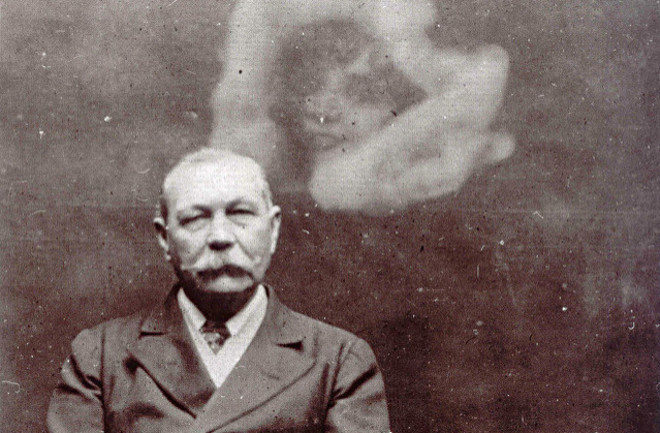 Sir Arthur Conan Doyle was a revered author and physician, but he was an ardent proponent of spiritualism during his lifetime. (Credit: The British Library) Back in August, it seemed that Sir Arthur Conan Doyle, the creator of Sherlock Holmes, was cleared of playing any role in one of the greatest hoaxes in scientific history. But in true Sherlockian form, there may still be a twist in this case that appears to be closed. And it's a fitting discussion on Halloween. The infamous ‘Piltdown Man’ hoax culminated in 1912 after esteemed geologist Sir Arthur Smith Woodward and amateur archaeologist Charles Dawson announced they had discovered the ‘missing link’ between ape and man. It featured a human-sized skull with an ape-like jaw, and it fooled scientists for 40 years before it was debunked. So how did Conan Doyle get involved in this, and why should he still remain on the suspect list, despite the latest evidence? Stay with me as I dig deeper into this longstanding controversy.

Conan Doyle may have invented the modern mystery novel and been a trained physician, but also was a ghost buster. He believed that departed spirits walked earth, and thought it was possible to communicate with them. This was all the rage in British culture at the dawn of the 20^th century, but for Conan Doyle it was more than a hobby. He used his status as an author and physician to promote the idea, and to this day you can hear Conan Doyle pushing spiritualism in his own words, thanks to a recording provided by the British Library.

A reconstruction of the Piltdown Man skull. (Credit: The Trustees of the Natural History Museum, London) Notice his claim that there could be scientific evidence for the spirits. He discussed spirits in the name of science, or so he thought, attending séances and engaging in what people called ‘spirit photography’. He circulated his ‘spirit photographs’ as evidence that he had contacted them. Recognizing these activities as pseudoscience, England’s scientific community utterly ostracized Conan Doyle. They ridiculed the famous author, pointing out that the spirit photographs were merely double exposures. Anyone could produce a spirit photograph if they controlled for all confounding factors, such as light, and so forth. And they were right, but they went on with their critique, saying that Conan Doyle did not understand how evidence worked. Claiming the creator of Sherlock Homes doesn’t understand evidence? That really takes chutzpah! That’s why some historians suspected Conan Doyle was a possible perpetrator of the hoax, reasoning that he did it to embarrass the scientific community, showing that they did not understand how evidence worked.

The hoax was rather elaborate. Between 1908 and 1912, somebody collected several human cranial bones, possibly from a Saxon graveyard, enough to show the form of two skulls. The perpetrator also obtained a fragmented orangutan mandible (jaw bone) and purposefully broke the part of the bone that articulates with the rest of the skull. The perpetrator also filed down the teeth to disguise their apelike nature, and later, just after the “discoverers” of the bones were challenged that the lack of a canine tooth made the hypothesis tough to swallow, a canine tooth appeared in the same place where the cranial bones and mandible had been dug up. Along with the cranium and mandible specimens, the hoax perpetrator gathered a plethora of bones and teeth from different mammals from various dig sites around the world, some dating authentically to the Pleistocene and Pliocene epochs hundreds of thousands to millions of years ago. The hoaxer also created bogus flint tools and stained everything reddish-brown with various chemical mixtures before burying all of the specimens in a gravel pit in the town of Piltdown, in England’s Sussex region. The purpose of the staining was to give the specimens a uniform coloring matching the gravel of the pit and also to hide surface features that might reveal the forgery.

In his book The Lost World, published in 1912, the year that Piltdown Man was announced as the missing link, Conan Doyle wrote, “a bone can be faked as easily as a photograph” — remember, he was writing this before the new "species" was revealed to the world, but after some of the specimens had been dug up. This led some to believe it was a confession of guilt. Conan Doyle also lived in Sussex, not far from Piltdown, and he was seen frequently at the gravel pit. He could get there easily, since he was one of only a few people in the area to own a motorcar. This all amounts to a wealth of circumstantial evidence, and there are some problems with the Sherlock Homes creator as a suspect. Notably, he never came out and revealed the hoax if he planned it all, thereby embarrassing those who fell for it. To be sure, there’s a plausible reason why he may not have done so. As the hoax went viral with an increasing number of scientists coming to accept Piltdown onward from 1913, Europe sunk into World War I. Conan Doyle was as patriotic as anyone else. He wanted to join the military, but being 55 years old at the war’s onset he couldn’t. Instead, he engaged politically, advising the government on war strategies. For somebody trying to influence Parliament in the capital of an empire that was fighting for its existence, saying “Aha, you established scientists fell for my little joke,” might not earn him much credibility. Alternatively, the government could have ordered the famous author to avoid trivial matters at such a critical juncture in history. Either way, the idea is that a vengeful plot to trap his tormentors could have fallen victim to poor timing. But scientists remained duped long after the war ended in 1918 and Conan Doyle lived until 1930. During those 12 years, he saw people toiling away their scientific careers. Knowing it to be a fraud and allowing it to continue for so long would be extremely vicious. For as long as he has been suspected, this factor has weighed strongly against Conan Doyle being the perpetrator. So what does the new study have to say about Conan Doyle’s involvement at Piltdown? Some recent stories have suggested that the new evidence clears the Sherlock Homes author, but we’ll see why that might not be the case. Top Suspects Conan Doyle has never been the primary suspect and in no way am I saying that he should elevated to that status. Instead, the privilege has always belonged to those who seemed to benefit the most when the Piltdown Hypothesis was in its heyday. One of these men was Sir Arthur Smith Woodward, whose knighthood, granted in the mid 1920s, was largely because of the Piltdown ‘discovery’. Looking carefully at the history, it’s fairly easy to remove Smith Woodward from the list, since he spent almost 30 years of his life searching the Piltdown site for more specimens that would never turn up. After retiring from the Natural History Museum, he even bought a house in Piltdown and lived there until his death in 1948, continually seeking new evidence. Clearly, he was not a perpetrator, but a victim of the hoax. Who would victimize Smith Woodward? Possibly another researcher, Martin Hinton, who has been on the suspect list since the hoax was blown officially blown in 1953, based on chemical tests showing that the cranial bones and mandible dated from different periods. As a young fossil authenticator, Hinton had a falling out with Woodward over a funding matter at the museum. Hinton was known to be a practical joker and one of the last specimens found at the Piltdown gravel pit (1915) was almost laughable — an elephant bone, carved (apparently with a steel knife) into the shape of a cricket bat.

A postcard showing excavations at Piltdown. Charles Dawson is on the left and Arthur Smith Woodward is on the right. (Credit: Natural History Museum) That’s revealing, because when Smith Woodward and Charles Dawson first presented ‘Piltdown Man’ as the missing link in 1912, they called him the “first Englishman.” This was in context of the buildup to World War I — not long before, in 1907, an authentic missing link species, Homo heidelbergensis, had been unearthed by England’s archenemy, Germany. So, here was a new fossil suggesting that the first Englishman was also the first cricket player. This didn’t stop Smith Woodward from publishing a paper proposing that it was an ‘implement’ crafted by Piltdown Man for some Stone Age purpose. The cricket bat sounds like the work of a practical joker, and the plot still thickens. During a museum excavation not long after Hinton’s death in 1961, researchers found a trunk among Hinton’s positions. The contents included bones that Hinton had stained with the same chemicals used to color the Piltdown specimens, and then cut, apparently to see how deeply the stain penetrated. Hinton has been suspected as being the perpetrator, but maybe he was just trying to figure out how the hoaxer had stained the bones and teeth.

This is where the newly published study comes in, because the authors – Isabelle De Groote, and several of her colleagues — imply that trained conservators should be taken off the suspect list. This is because analysis of the samples show evidence of sloppy work. Putty was set to harden too quickly, for instance, causing some bone to crack. Professionals like Smith Woodward and Martin Hinton would not have made this mistake. In addition to tying down the sources of the cranial and mandible specimens, the study reveals a consistent modus operandi in terms of how the bones, teeth and tools were stained and otherwise manipulated. This, the authors say, weighs in favor of the suspect who has always been at the top of the list, Charles Dawson. As he was an amateur, Dawson is certainly still at the top of the list, but not particularly because of the research by De Groote and her colleagues. The modus operandi is certainly consistent with Dawson being the perpetrator. But since Conan Doyle was also not a trained conservator, the new study doesn’t necessarily clear him. In fact, by removing Smith Woodward, Hinton and others who would have known how to forge fossils much better, it may elevate the famous author — not to the point of overtaking the notorious Dawson, but certainly enough for us to raise an eyebrow.