Shell Shape Helps Tortoises Get Up 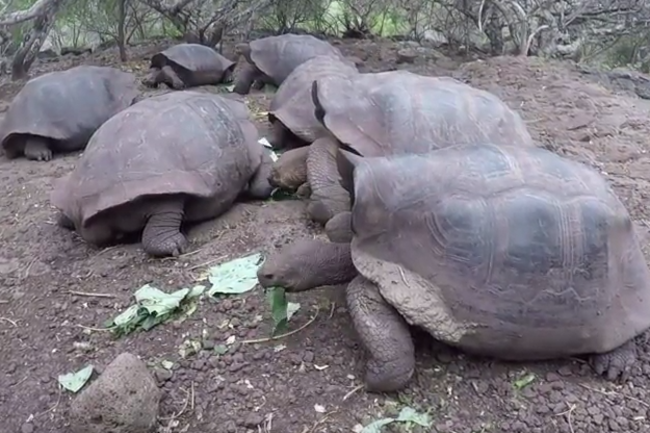 A tortoise's shell shape can help determine how quickly it can turn right side up after falling on its back. (Credit: YouTube/Bio Insider) It’s tough being an adult giant tortoise in the Galapagos Islands—they’re always one step away from flipping upside down. Whether it’s from a fight for male dominance or treading over a jagged field of lava rocks, being unable to get back up is among the most common ways these giant tortoises can die. There is no Life Alert button to press for help. Instead, these animals must rely on their ability to flip over and keep on living. Luckily, many Galapagos tortoises are successful at doing so. It’s referred to as “self-righting,” and is the focus of a new study published Thursday in Nature Scientific Reports. Ylenia Chiari, an evolutionary biologist at the University of South Alabama, led a group of scientists that tested several tortoise shell varieties to note the differences in how these creatures right themselves. This is the first study of its kind to show two different shell types differing in the energy required for the tortoises to self-right.

Chiari and her colleagues used 3D shell reconstructions of 89 adult tortoises–three species of domed tortoises and two species of saddleback tortoises–to compare the self-righting potential of the two shell types and see which would require less energy to overturn. They realized that ones with the same shell shape used similar strategies to get back up. The domed tortoises, with more rounded shell shapes, wave their legs around. Saddlebacks, with flatter shells, also wave their legs, but are thought to use their neck to push against the ground to give them momentum to turn over.

The domed shells are more rounded, while the saddlebacks are flatter. (Credit: YouTube/Bio Insider) Chiari says these two types of tortoises provide an ideal system to study, because when born, the two appear identical. But as they grow, their shell shapes and adaptive traits emerge. “You have all these different species on the Galapagos, and you have these different shells that basically evolve multiple times,” she says. “So, it’s a very neat system, because it means, probably, these different shells work well for something. The question is: what is this something? And the real answer is we still don’t know.”

Which Came First: The Tortoise or Its Shell

Chiari says they hypothesized that the saddleback, because of their drier, lower-elevation environment, would fall on their backs more often. Because of a higher temperature climate, she says they were expected to flip more easily and more often. But that wasn’t the case. Instead, the saddlebacks required more energy to right themselves than the domed tortoises, suggesting that several traits with the saddleback shell type could have evolved to help them flip over. Is that due to the shell itself? Chiari says it may not be, because on data alone, scientists haven’t established which came first: the saddleback’s longer neck, or the shape of the shell itself, which has a taller anterior opening for its neck. This allows the tortoise greater movement, and helps them self-right more quickly. https://www.youtube.com/watch?time_continue=2&v=8MNNjNKWVuc And Chiari says there is still more data to analyze with regard to tortoise shells. “We still don’t know how the shells perform differently for a bunch of other functions,” she says. In the future, Chiari hopes to explore the differences of tortoises on a genetic and molecular level. She compares these shell variations to the variations in the height of people. Some are tall, some are short, but regardless of that fact, each adapts to carry out the same tasks in different ways.