Sheep tend to the left. 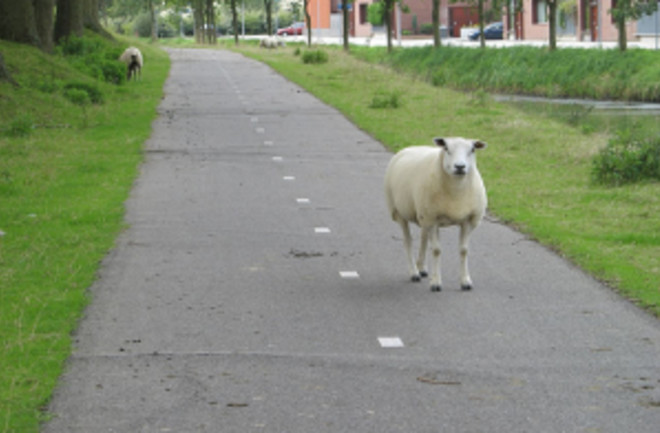 Photo: flickr/EvaIf you feel ostracized because you are left-handed, maybe you should join a herd of sheep! By studying the directions sheep choose to turn in a maze, these scientists have determined that when left to their own devices, sheep tend to turn to the left. But does this mean that ewe would vote for Obama?Sheep laterality. Turning preferences among 309 white-faced ewes were individually evaluated in an enclosed, artificially lit T-maze, followed by each ewe choosing either a right or left return alley to return to peers. Data recorded included time in the start box, time in the T-maze, exit arm chosen to leave the T-maze, and return alley. Right and left arms of the T-maze were chosen 65.7% and 34.3% of the time, respectively, while right and left return alleys were chosen 32.4% and 67.6%, respectively. Exit arm and return alley were not independently chosen (p <.0001), with observed counts being higher than expected under independence when ewes made the same choice for exit and alley (RR or LL turn patterns) and being lower than expected for alternating choices (RL or LR). Out of the 309 ewes, 28.2% and 30.1% chose RR and LL turn patterns, respectively, while 37.5% chose the RL turn pattern, but only 13 (4.2%) chose the LR turning pattern. Overall, ewes that initially turned right when presented a second turning opportunity had a slight preference to alternate their turning direction, while ewes that initially turned left tended to continue turning left when given another chance to turn. Exit arm and return alley laterality was not related (α =.05) to time of day the test was administered, ewe's age or genetics, most recent liveweight, or most recent shorn fleece weight. The mean time spent in the start box (21 s) was not related to exit arm (p =.947) or return alley (p =.779). Mean time (15 s) spent in the T-maze was not related to exit arm (p =.086) or return alley (p =.952). More research will be required to understand sheep turning laterality and how it can impact working facilities and research equipment. NCBI ROFL: Real shepherds use trebuchets. NCBI ROFL: Since when is barnyard flavor a bad thing? NCBI ROFL: Science proves right-handers are jocks, left-handers are nerds, and ambidextrous people love making pot holders.