During their heyday in the 19th century, the Shakers were famed as ascetics who led pious, simple lives. But new evidence from a dig at Canterbury Shaker Village, New Hampshire, suggests that life there was not so simple. Archaeologist David Starbuck of Plymouth State College unearthed hundreds of beer bottles, along with containers for wine and whisky--all of whose contents were strictly taboo under Shaker law. Members of the community also were sworn to celibacy, yet Starbuck has excavated bottles that held perfume and even hair restorer, which hint at an interest in personal appearance. "We're not trying to dig up the dirt on the Shakers. We're just trying to obtain some sense of their reality," says Starbuck. 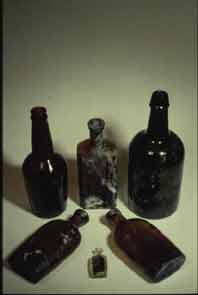