Toads are an evolutionary success story. In a relatively short span of time, they diversified into around 500 species and spread to every continent except Antarctica. Now, Ines van Bocxlaer from Vrije University has uncovered the secrets of their success. By comparing the most home-bound toads with the most invasive ones, she has outlined seven qualities that enabled these amphibians to conquer the world. In a common ancestor, these seven traits came together to create an eighth - a pioneer's skill are colonising new habitats.

Some, like the harlequin toads, are restricted to such narrow tracts of land that they are vulnerable to extinction. Others, like the infamous cane toads, are highly invasive and notoriously resistant to extinction despite the best efforts of Australians and their sporting equipment. This diversity of lifestyles allowed Bocxlaer to search for characteristics shared by the most pioneering of toad species.

She compared over 228 species, representing just under half of all the known toads, and constructed a family tree that charts their relationships. She showed, as others before have suggested, that the family's fortunes kicked off in South America, around 35-40 million years ago. This was the start of their global invasion.

Seven qualities make for wide-ranging toads. For a start, the adults don't have the typical amphibian dependency on constant water or humidity. They have skins that can cope with the drier side of life, giving them a chance to seek out new habitats away from the safety net of moist environments. Secondly, they tend to have fat deposits near their groin, which act as a back-up energy source when food is scarce. Thirdly, they tend to be larger (meaning at least 5 centimetres in length), which also helps to conserve water. Larger animals have larger bladders so they retain more water, and they lose less of it because they have small surface areas for their size.

Fourthly, the most wide-ranging species have parotid glands, large sacs that are usually armed with poisons called bufotoxins. Those of the cane toads have claimed the lives of many would-be predators, and even some humans. The defensive benefits are obvious but they also help toads to, once again, break their water habit. The glands secrete molecules that are extremely attracted to water, allowing the animals to store large amounts in the dry season.

The final three traits all affect the toads' reproductive life. Some species have to lay their eggs in very specific locations. But the widest-ranging ones opportunistically lay in all sorts of environments as long as there is some water, such as the brief puddles that form during sporadic rainfall. Pioneering species also tend to have tadpoles that get their food from their environment, rather than from yolk or other food sources packaged by their parents. Finally, toads with the largest egg clutches (up to 45,000 in the great plains toad) are more widely distributed than those that lay few eggs, like the flathead toads that only lay five.

By their powers combined, these seven attributes make a toad optimally poised to expand its range. By mapping the presence of these traits across the toad family tree, Bocxlaer showed that they slowly accumulated in the earliest toads. The point where all seven had been checked off the list coincided with the dramatic expansion of the dynasty out of South America and into other continents. 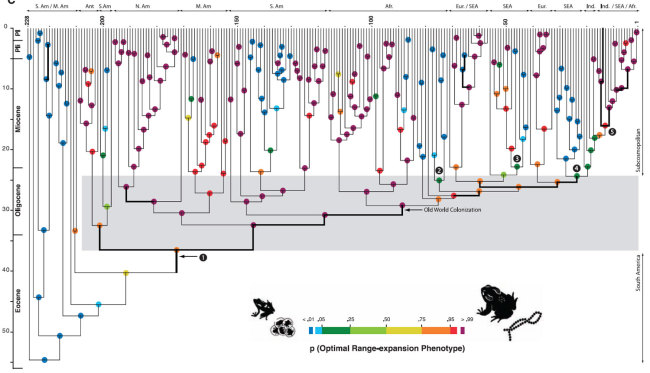 As these ancestral species hopped across the world, so they diversified into new forms. As the toads reached new continents and colonised new niches, they rapidly gave rise to new species. In the Old World, several lineages independently lost their ancestors' globe-trotting abilities, in favour of being more specialised and locally adapted.

But many retained the pioneering qualities. Today, many toads still have all seven traits to the extent that even distantly related species look very similar. They're relatively large, land-living animals with fat deposits and parotid glands, and they opportunistically lay large clutches of eggs that hatch into independent tadpoles. That's certainly a fair description of the cane toad. Bocxlaer's study shows that this pest's remarkable skill at invading Australia was rooted deep in its ancestry, a "remnant of the period when toads colonised the world".

A point of clarification: What is the difference between a frog and a toad? Scientifically, not much - the common wisdom says that frogs are moist-skinned and live in water, while toads are dry-skinned and live on land. But this distinction isn't very clear-cut. Today, all amphibians within the order Anura are called frogs. They include the members of the family Bufonidae, which are the so-called true toads. So all toads are also frogs. There's still potential for confusion because some groups like the spadefoot and fire-bellied toads have the word "toad" in their name, but aren't part of the Bufonidae. They are still frogs though...

More on frogs and toads: