Set Your CT Scanner to "Kill" and Look Inside Some Fossils 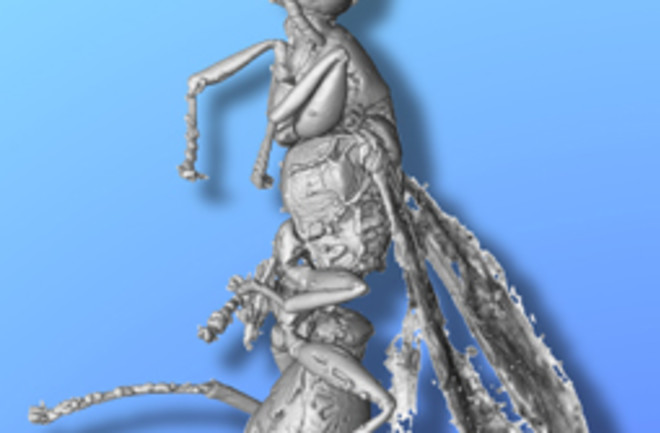 For more amazing feats of 3-D scanning, check out our gallery, 3-D Scanning: How to Put the Real World Into Your Computer.

A rich history of life on earth lies out of sight—in 100 million-year-old nuggets of amber, in potato-shaped fossil eggs, and in mundane-looking ancient teeth. Correction: These things used to be out of sight. New imaging tools borrowed from medical research and industrial engineering are beginning to liberate some of evolution’s most closely held secrets. “I thought we’d never be able to see inside specimens without breaking them open,” says Harvard University anthropologist Tanya Smith. “The idea that we can go into an object like a fossil and pull a piece of time out virtually is amazing.”

The breakthrough relies on computed tomography scanning, better known as CT. It is much like the familiar process used by hospitals to image the insides of patients, but amplified to levels that would be lethal to humans. In one version of the technology, scanners create X-ray pictures similar to those taken in the emergency room in order to examine large fossils and reveal structures hidden inside. Newer synchrotron scanners can do even better, producing extremely focused beams a trillion times brighter than the ones generated by standard X-ray machines and yielding incredibly high-resolution images. There are two catches, however: This type of imaging works only for small samples, and there are a mere 50 or so synchrotron devices in the world.

While traditional medical X-rays detect only four densities in an image (corresponding to fat, water, gas, and bone), CT scans can identify hundreds of levels of density, readily distinguishing a fossil from its surrounding blanket of rock. Combining many images taken from many angles, CT scans can transform a two-dimensional picture into a precise, three-dimensional replica of the object inside the rock—enabling scientists to digitally examine rare specimens over and over without fear of damage.

The images on the following pages capture some of the most intriguing of the newly uncovered finds.

taught us how insects get trapped and preserved in amber. Unfortunately, most amber is not as translucent as the examples on the silver screen. This 100 million-year-old wasp was trapped in opaque amber until it was virtually set free by researchers at the European Synchrotron Radiation Facility (ESRF)—a 1,000-foot-wide particle accelerator that creates intense beams of X-rays. When Paul Tafforeau of ESRF scanned similar chunks of dark amber from Charentes, France, he found hundreds of other insects, including fossilized beetles, ants, and flies. He and his colleagues then magnified some of the creatures and used 3-D printers to create plastic models that allow scientists to examine the creatures in detail.

Analysis of the Charentes amber has so far revealed more than 600 different insects—and not one of them matches a modern species. Tafforeau, who heads the project, began scanning dead flies for fun while he was a graduate student at the facility in 2002. “Each scan is a new discovery,” Tafforeau says, yet the ancient insects appear, overall, remarkably similar to their modern counterparts; they differ chiefly in detail. “For the most part,” Tafforeau says, “an ant living 100 million years ago looks like an ant today.”

Flight of the Ivorybill Not all the analyzed specimens are prehistoric. Cornell researchers performed CT scans on the remains of this ivory-billed woodpecker to avoid dissecting it. Widely believed to have gone extinct in the mid-1900s, the ivorybill sparked controversy when excited bird-watchers claimed that a fuzzy video that surfaced in 2005 depicted a living ivory-billed woodpecker taking flight in Arkansas. Many scientists were skeptical. To help settle the debate, Cornell biologists took the only existing fully preserved ivory-billed woodpecker specimen from the archives of the Smithsonian Institution in Washington, D.C., to the University of Texas CT lab for imaging. The resulting three-dimensional rendering of the bird’s wings, combined with what we know of its wing-beat rate and studies of its cousin, the pileated woodpecker, allowed graphic artist Jeff Wang to bring it back to life digitally for comparison with the blurry video. The jury is still out on the reemergence of the (presumed) extinct bird.

Dinosaurs in the Shell The first complete embryo of a neoceratopsian, or horn-faced dinosaur—a member of the ubiquitous family of herbivores that roamed Mongolia’s Gobi Desert in Cretaceous times—is preserved within this sandstone-encrusted egg. Because the shell is less than two inches long and the bones are fragile, physically dissecting it was too risky. Instead, paleontologist Amy Balanoff of the American Museum of Natural History in New York City scanned the embedded skeleton at the University of Texas (UT) CT lab and then digitally removed the embryonic bones from the egg. The scanning took more than three hours and resulted in 1,296 digital cross-sectional slices, each 1/1,000th of an inch thick. To distinguish embryo from rock, Balanoff manually tagged every scrap of bone in each slice so all the bones could be reassembled in three dimensions at the end.

“Every fossil is different, and it’s hard to know how well it’ll scan until you try it,” says Richard Ketcham, director of the UT CT facility, but this one came out relatively easily. The scans, combined with information from other nearby remains, suggest that the species inside the egg was Yamaceratops dorngobiensis—a relative of the famous, 30-foot-long triceratops but much smaller, reaching only 6 feet in length.

Within a Primate Skull When it comes to early primates, complete skulls are extremely rare—but when we find them, they invariably fill in long-sought details of our human family tree. In the series here, anthropologist Tim Ryan of Pennsylvania State University scanned the only intact skull (in fact, the only known specimen) of a 35 million-year-old primate genus, Rooneyia, as part of a broader study on inner ear architecture and the evolution of locomotion. In general, speedy mammals have larger, more stabilizing semicircular canals relative to body mass than slower-moving brethren. “The CT data let us access the skull’s internal structures without destroying it,” Ryan says. That would have been especially painful in this case since the skull is unique.

After taking measurements, Ryan compared Rooneyia’s ear canals with those of modern animals to determine how it would have moved in life. This scan reveals that the rat-size primate, R. viejaensis, may have been able to leap and moved at a medium-fast pace.