These magnificent wanderers of the open ocean have inspired sailor's legends and blockbuster movies. 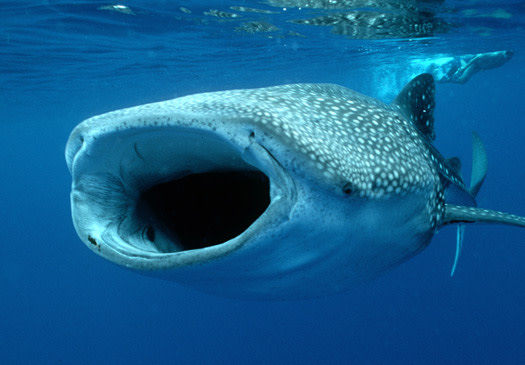 Some fish scorn the easy life of the shoreline, and instead spend most of their lives out to sea, wandering in the wild blue yonder. In a new book from the University of Chicago Press, Fishes of the Open Ocean, author Julian Pepperell lets readers get up close and personal with these impressive and mysterious ocean denizens.

Whale sharks' habits are still poorly understood, but electronic tagging is beginning to reveal their secrets. Scientists recently realized that whale sharks aren't slow, lumbering creatures as previously thought; instead they leverage their massive weight to dive-bomb through the water like a hawk falling through the sky. 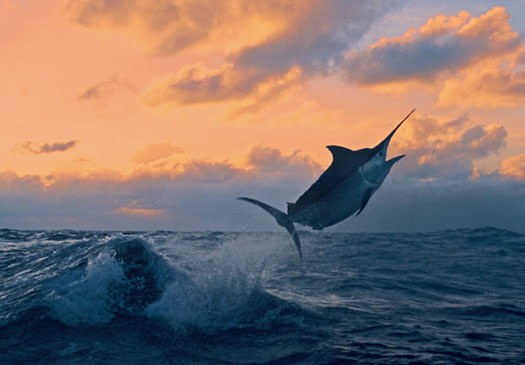 The black marlin is a giant of the ocean, measuring up to 13 feet in length and weighing up to 1,500 pounds. The fish cruises the Pacific and Indian oceans in search of smaller fish to devour, and sometimes uses its spear-like upper jaw to stun its prey.

The power and size of this athletic fish make it a prize for sport fisherman, and the marlin's strength and capacity for struggle was famously celebrated in Ernest Hemingway's novella, The Old Man and the Sea. 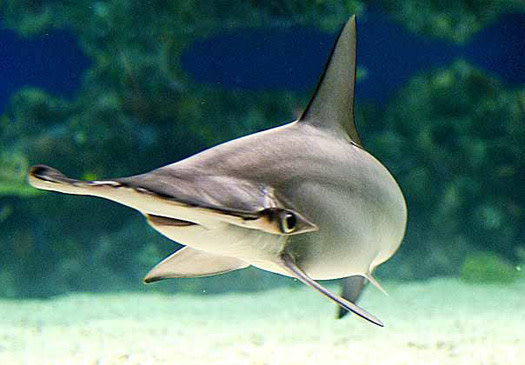 The most distinctive feature of the hammerhead shark is also the one that scientists have struggled to explain: the shark's bizarre head anatomy, with its flattened snout and widespread eyes.

Researchers have put forth a number of theories for why the oddly shaped heads evolved. One recent study confirmed that the eye arrangement does give the shark a vision advantage. Not only does it have binocular vision like humans, where its two fields of vision overlap, but by swinging its head to and fro it can see through 360 degrees of vision.

Other researchers have suggested that the head acts as a hydrofoil to help the shark swim, or that the shark benefits from having chemical, electrical, and pressure sensors spread out along the head's leading edge. 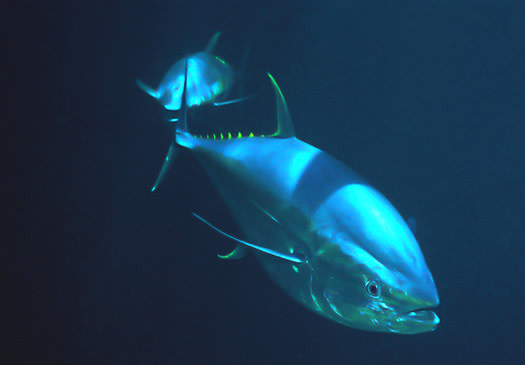 Because of the patchy availability of food in the open ocean, predatory species like this yellowfin tuna have to travel vast distances to survive. Its torpedo-shaped body is designed for speed, allowing the mighty fish to chase down fast-moving prey.

Adult yellowfin, which are also known as ahi tuna, have few predators of their own, except for humans. The yellowfin is tremendously important to commercial fisheries, and the total world catch amounts to at least 800,000 tons per year. But because the fish reproduce rapidly (a spawning female produces several hundred thousand eggs, Pepperell writes), researchers believe the yellowfin is not in danger of being overfished. That's a stark contrast to the situation facing its endangered relative, the bluefin tuna. 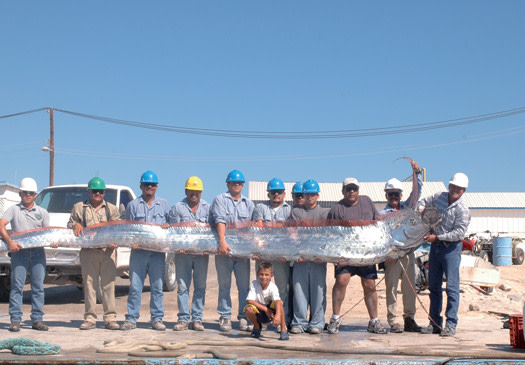 The tales of sea serpents that terrified seafarers in days of yore may have been inspired by the mysterious oarfish. This creature gained its name from the two delicate fins that extend down from beneath its head, which resemble long oars. However, while the function of these odd "oars" isn't yet known, experts say they're too flimsy to help with locomotion.

The oarfish in this picture was stranded in Mexico, and it appears to be about 20 feet long. Pepperell writes that there have been reports of oarfish that measure up to 55 feet long, but these unsubstantiated accounts are most likely just fish tales. 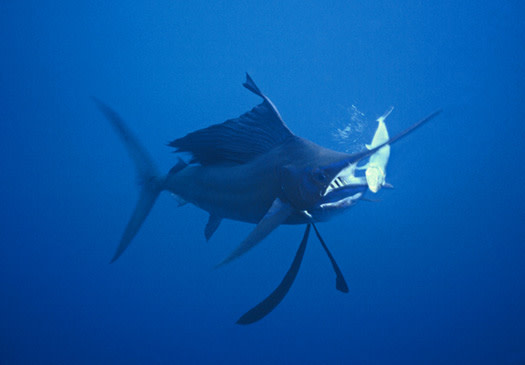 The elegant sailfish is a swift seafarer: it's capable of swimming at speeds as high as 60 miles per hour in short bursts.

The oversized dorsal fin that gives the sailfish its name is usually kept folded down to the side while the fish is swimming, but it's hoisted up when the fish feels threatened or in the course of a hunt. Sailfish hunt cooperatively, encircling a school of anchovies or sardines and leaping dramatically to herd the baitfish into a tightly packed, panicked ball. Then the predators move in. If the ball begins to disperse, the sailfish dramatically raise their sails like capes to frighten the prey and herd them together again. 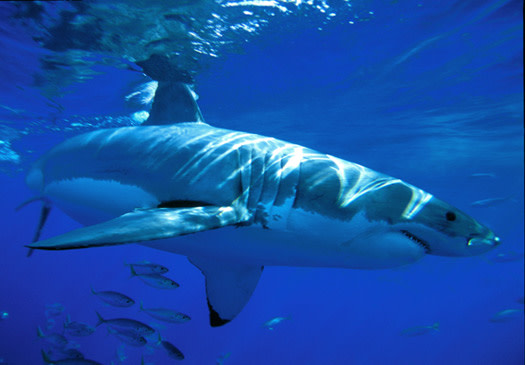 Of all the ocean's dangerous creatures, none strike more fear into the human heart than the great white shark. The largest predatory fish on the planet inspired Steven Spielberg's movie Jaws, which sealed the shark's image as a man-eater.

But experts insist that while the great white's hunting habits do earn it the title of a seal serial killer, attacks on humans are rare. As marine biologist Francesco Ferretti says: "Spielberg has a lot to answer for. In reality you have about as much chance of being eaten by a shark as you have of winning the lottery twice." 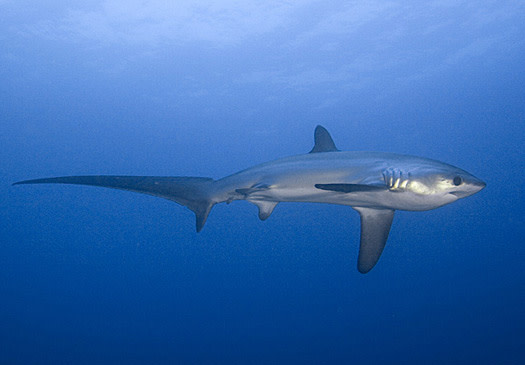 The remarkable thresher shark sports a tail that's as long as the rest of its body, and it puts this extraordinary appendage to good use. When the solitary shark is hunting, it first uses its tail to herd prey by violently slapping the water's surface. Researchers believe that the shark also uses its tail when it goes in for the kill, whacking its prey to stun it into submission.

In Fishes of the Open Ocean, Pepperell writes that historic accounts tell of thresher sharks attacking whales, and notes that while these stories seem highly unlikely, they do make for fascinating reading. One eyewitness claimed that the thresher's tail was "like the lashing of a gigantic whip, while the blows are audible for two miles on a calm day. So heavy are they that strips of blubber are cut by them from the back of the hapless whale."