Self-control in childhood predicts health and wealth in adulthood 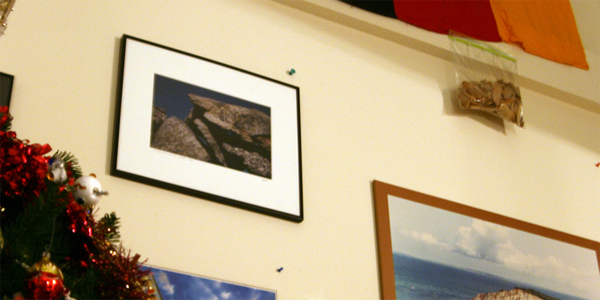 “Control! Control! You must have control.” - Yoda

Pay attention. Put that down. Stop doing that. Eat that later. Would you, just, behave? These phrases are a familiar part of family life, as parents try to drum a sense of self-control into their children. Right from the start, they are taught to restrain their impulses, focus on their goals, and control their choices. This seems like a wise move, but how could you tell if such instruction actually affects a child’s fate? Ideally, you would follow a group of children into adulthood, to see how their degree of self-control affects the course of their lives. You’d need to catch up with them at regular intervals to look at their health, mental state, finances and more. You’d need to meticulously plan the study decades before the important results came in, and you’d need to keep in close touch with the volunteers so they stick with the study. In short, you’d need to have set up the Dunedin Multidisciplinary Health and Development Study. The Dunedin Study was the brainchild of Phil Silva, and its wide-ranging team include Terrie Moffit and Avshalom Caspi, a husband and wife duo who work at Duke University and King’s College London. The study began way back in 1975, with 1037 children who were born in Dunedin, New Zealand between April 1972 and March 1973. The researchers became their occasional companions through most of their lives, up till the age of 32. At 11 separate points, Moffit and Caspi measured the recruits’ health, wealth and more. And amazingly for a study of this sort, 1014 of the children are still alive and involved. Thanks to their unique study, Moffit and Caspi have found that children who show high levels of self-control within their first decade of life do better in adulthood. Even after accounting for things like intelligence and social class, those who had a tighter grip on their behaviour as children are now in better health as adults. They’re also less likely to be abusing drugs, have a criminal record, or suffer from financial problems. Moffit and Caspi assessed the children’s self-control at the ages of 3, 5, 7, 9 and 11, by looking at their hyperactivity, attention, impulsiveness, aggression, and more. The children did the same evaluations, as did their parents and teachers. All the scores were a good fit for one another, so Moffit and Caspi combined these numbers into a single measure of childhood self-control. Finally, they adjusted the value according to the volunteers’ family background and IQ. This childhood score proved to be a portent of things to come. Children with lower scores (poorer self-control) had poorer health at the age of 32. Their lungs didn’t perform as well. They were more likely to have gum disease, be overweight, or depend on drugs like tobacco, alcohol or cannabis. Among those with the highest levels of self-control, 11% had multiple health problems, compared to 27% of those with the lowest levels (see graph below). Those with poorer self-control were also more likely to run into financial or social problems. As teenagers, they were more likely to start smoking, leave school with no qualifications, or have unplanned pregnancies. As adults, they had more credit problems and troubles with money, and fewer tangible assets like a home, savings or a pension. They were more likely to have been convicted of a crime, and their own children were more likely to be raised in a single-parent household. And in fact, their childhood self-control was a better predictor of these financial worries than either their IQs or social backgrounds. 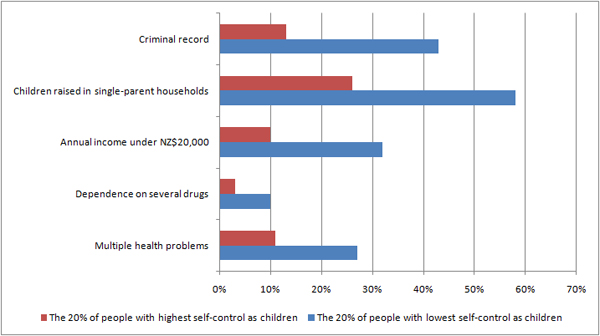 Of course, these are just correlations. Moffit and Caspi did their best to account for differences in background and IQ. Even so, the thousand children still came from families with many other differences that could have affected the course of their lives, including parenting style and home environment. To deal with that, the duo turned to a second group of children – 509 pairs of British twins who they have followed since their birth in 1994-95. Each pair of twins has lived with the same parents in the same house. And despite their shared environments, the twin with poorer self-control at the age of five was still more likely to start smoking at the age of 12. Their behaviour was more antisocial and their school grades were worse than their more restrained siblings. Moffit and Caspi think that this research has big implications. If poor self-control underlies a lot of important societal problems, such as drug abuse, crime and poverty, you could do a lot of good by boosting this skill during childhood or adolescence. Many other things correlate with these social problems, including IQ and social background, but few of these are as malleable as self-control. For a start, Moffit and Caspi say that their results support the use of “opt-out programs”, which aim to steer people’s decisions by making the “right” choices easier. People could be automatically enrolled onto organ-donor programs, with the option to opt out if they wish. Canteens and supermarkets could put healthy options front and centre, instead of the sweets and snacks that currently line the check-outs. Specific amounts could be automatically deducted from their salaries and transferred into savings, unless they say otherwise. These strategies will be familiar to anyone who has been following the UK government’sfascinationwith the“nudge” theory, proposed by economists Richard Thaler and Cass Sunstein. They are effectively appeals to laziness. The idea is that people with poor self-control should take the easy option, because opting out requires them to expend effort and planning. But I’m not convinced of the value of the long-term value of these initiatives. They play to poor self-control, rather than attempting to improve upon it. And improvement is important. In their study, Moffit and Caspi found that the more self-control people had as children, the better their futures, even for those at the high end of the scale. They also found that children who developed better self-control as they grew up fared better than those who stayed at the same level. The good news is that there are plenty of more direct measures. In 2009, Alex Piquero published an overview of 34 clinical trials that tried to boost children’s self-control. The trials used a variety of methods including role-playing using video-taped scenarios, rewarding children for good behaviour and relaxation training, including meditation and deep breathing techniques. Some involved a complex program of parent support groups, social skills training, academic tutors, peer buddies and more. These diverse methods had similar goals: teaching children to monitor and control their own emotions, solve social problems and build solid friendships. Despite the variety of techniques, Piquero found optimistic results. Overall, the programs he analysed were largely successful in improving self-control and warding off delinquent or problematic behaviour. Moffit and Caspi’s work suggests that such improvements will cascade throughout a child’s adult life. However, Moffit warns that many of the studies that Piquero analysed had high drop-out rates and many weren’t properly blinded. “The decisive answer is not in yet, and more programmes should be designed, and evaluated rigorously,” she says. “The essential part will be to prove that there is a return on investment, a good cost-benefit ratio. All this research is going to require sustained willpower on the part of scientists and funders, and we hoped our paper would give them encouragement to do the necessary work. Our paper does not say "nothing can be done" it says "get going and do something." Reference: Moffitt, Arseneault, Belsk, Dickson, Hancox, Harrington, Houts, Poulton, Roberts, Ross, Sears, Thomson & Caspi. A gradient of childhood self-control predicts health, wealth, and public safety. PNAS http://dx.doi.org/10.1073/pnas.1010076108 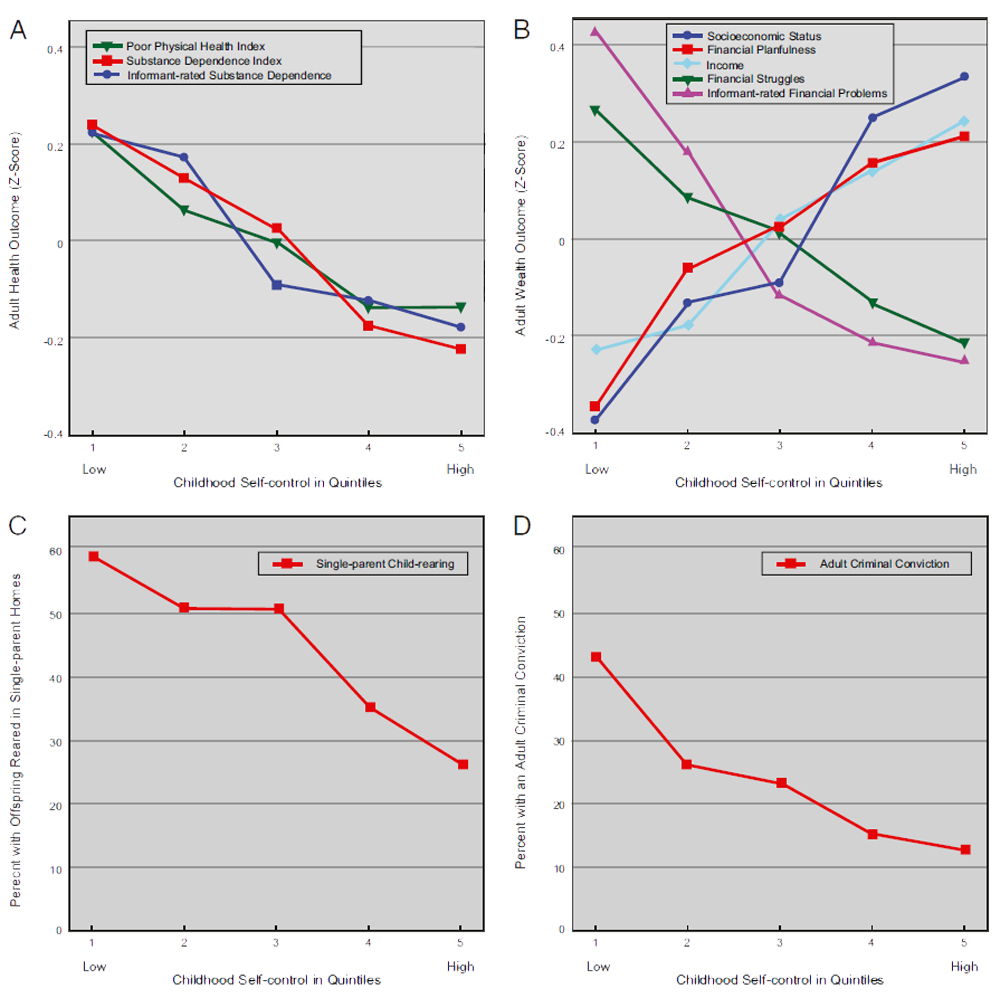 Correction: Originally, the article implied that Moffitt and Caspi started the Dunedin Study in the 1970s. The study's founder was actually Phil Silva. More on child development: