See How the Planet Breathes

Measurements from NASA's Terra satellite are providing the first continuous picture of Earth's carbon metabolism, the process in which plants absorb carbon dioxide during photosynthesis and spit it out during respiration. This chemical cycle makes the air breathable to us and helps regulate our planet's climate. Terra collects readings on reflected solar radiation, temperature, and weather conditions. Researchers then process the data to deduce when and where plants pull in the most carbon dioxide from the air. Wayne Esaias, a biological oceanographer at NASA's Goddard Space Flight Center, and Steven Running, an ecologist at the University of Montana, say Terra will allow academics and the public alike to read the status of the global ecosystem at a glance. Running hopes that TV weather reports will someday include "the evening biosphere update." Terra could also allow scientists to read how much food is available for the ocean's plant eaters—measured by the amount of carbon being processed by phytoplankton—and adjust local regulations to prevent overfishing, Esaias says. 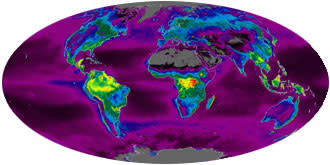 In this map, the red areas absorb the most CO2—about six pounds per square foot each year. Photograph courtesy of NASA/GSFC.