Technique allows researchers to watch brain activity in a zebrafish as it pursues its prey. 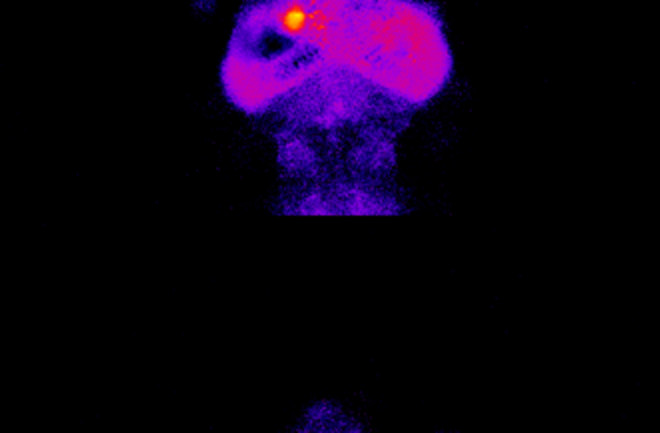 Scan of a zebrafish brain, showing how its neurons activate (shown in red) as it watches its prey nearby. | Muto et al., Current Biology (2013)

In a first, researchers in Japan have captured the brain activity of a living animal as it pursues its prey.

“Seeing is believing,” says Koichi Kawakami, a molecular and developmental biologist at Japan’s National Institute of Genetics. In the past, he says, researchers have had to infer brain processes indirectly, by watching behavior and surmising what the brain must be doing. That makes his feat a big improvement. “Nothing is better than direct observation,” he says.

For years, researchers have regarded the ability to watch an organism’s neurons fire — at high resolution, as the animal behaves naturally — as the pinnacle of brain observation. In humans, neuroimaging techniques show brain activity, but the methods aren’t fast or fine-grained enough to give a clear picture, Kawakami says. Attempts on mice and rats have been challenging: Their brains must be opened, which is invasive and makes it difficult to capture brain activity in natural conditions.

In most animals, including humans and rodents, the biggest problem is that skulls and brains are opaque. Kawakami and his team cleared that hurdle by choosing the zebrafish as their model. Zebrafish embryos and larvae are transparent, and their genetics are well-known.

The researchers tinkered with the fish’s DNA so that a protein present only in neurons would fluoresce when the neurons were firing. They then watched the neuronal activity of the developing fish at high resolution as it moved about its natural environment, eyeing and attacking its prey.

“The fundamental brain functions are conserved between fish and human,” says Kawakami.

“We hope that we can understand the processes at cellular and molecular levels by studying the fish brain,” he adds.