Secrets to the Sauropod's Size

How the iconic dinosaurs grew to be the world's biggest-ever land animals. 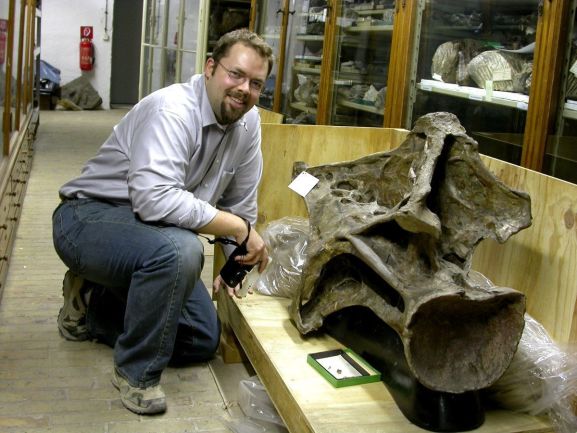 Paleontologists have long known that sauropod bones were pneumatic (hollow and air-filled).

But as researcher Matt Wedel (here with a single C8 sauropod vertebrae) cautions in his collection paper, the pneumatic function of sauropod bones may not have started out exactly purposeful.

Although an untested hypothesis at this point, Wedel thinks that the sauropods’ pneumatic tail bones evolved randomly, much like humans sinuses, our own version of pneumaticity whose function remains unknown.

The haphazard location of holes along the tail furthers the notion they may have been selectively neutral. At some point, however, enough variation in tail pneumaticity likely existed for natural selection to pick up on the advantage of a lighter tail, just as it would favor a lighter and thus longer neck. 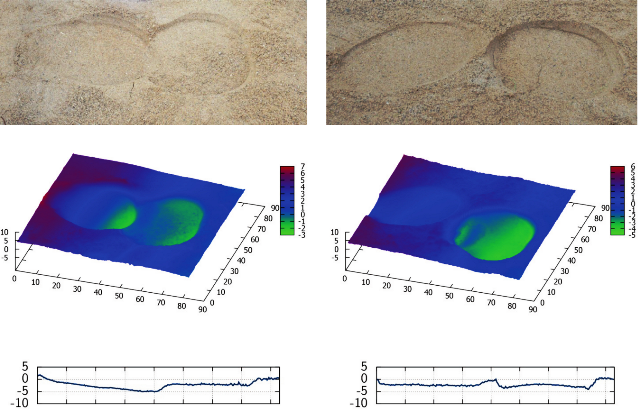 Fossilized footprints have been a major source of knowledge about dinosaurs. But now living animals can provide insights into their locomotion.

Tom Schanz and colleagues experimentally analyzed the footprint of an African elephant to show that the weight of the elephant can be calculated from the geometry of its footprint and properties of the soil, suggesting that the same could be done for long-gone sauropods. 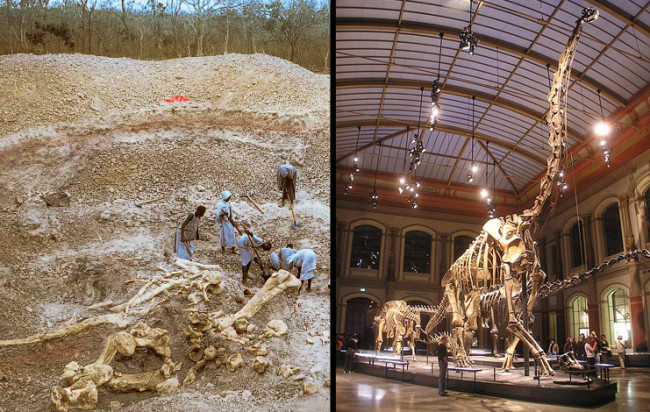 The ‘Fund no’ quarry at the fossil-rich Tendaguru Beds formation in Tanzania, left, preserved a tail of giraffatitan (Brachiosaurus) with the vertebrae roughly in order. The vertebrae are visible near the bottom of the photo here.

The find was incorporated in the famous mounted skeleton of giraffatitan in the Museum fur Naturkunde in Berlin, right. With its front legs longer than the rear, and standing erect, researchers believe it to be the only sauropod to have used its neck in a giraffe-like pose for the purpose of eating. 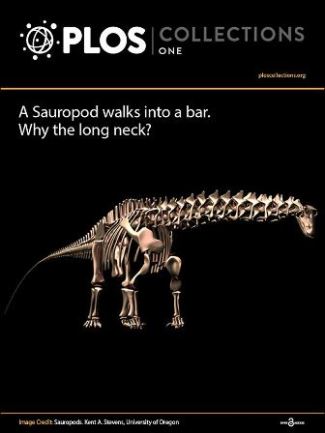 Sauropods have left an indelible mark on the human psyche, despite the fact that no human has ever seen one.

As collection editor Andy Farke writes, there is only so much one can tease from a skeleton. Although we may never know the exact details of sauropod biology, the research presented here goes a long way towards marking those boundaries of biological probability.

Not too bad for animals that have been dead for over 65 million years!

Want more on sauropods? Go to the source. Full versions of the previously highlighted PLOS ONE sauropod studies are freely available for your reading and re-use in the newly released collection, Sauropod Gigantism. This collection, containing fourteen research papers and accompanying blog posts, is also available free as a downloadable e-book from the open-access science publisher PLOS. 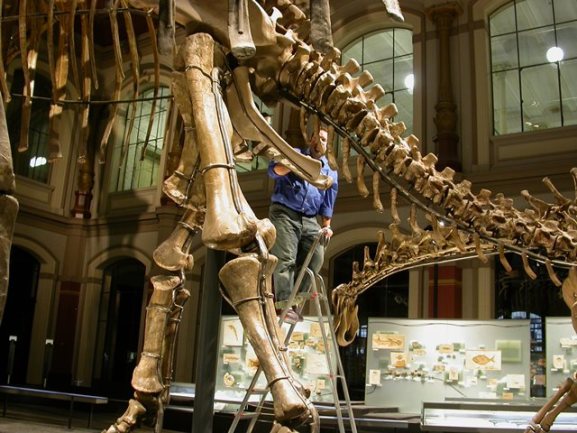 Paleontologist Matt Wedel on a ladder to inspect the long and winding giraffatitian tale for his research on sauropod bones.

“Iguanas that are six feet long can hit people hard enough to split a leather jacket,” he says. “I shudder to think what a 60-foot Apatosaur could do with its tail.”

According to the evolutionary cascade model, sauropods started out small.

They became giants, theorizes author Martin Sander, as each trait provided some adaptive advantage, leading to the emergence of another adaptive trait, and so-on through a cascade of evolutionary changes that ultimately ended with dinosaurs that were the world's largest terrestrial creatures. 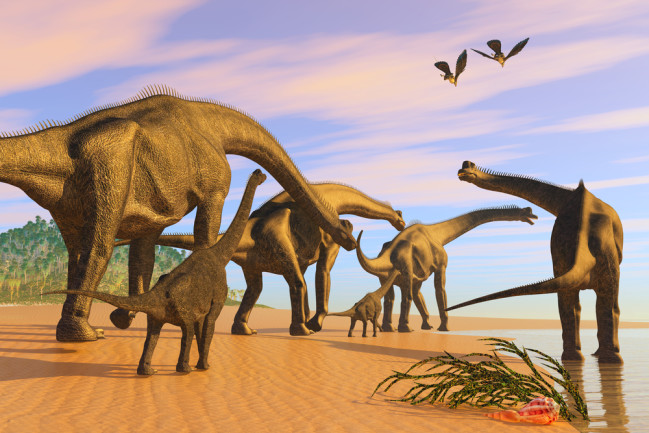 The long-necked sauropod dinosaurs are perhaps the most culturally iconic prehistoric animals, appearing in everything from Flintstones cartoons to the Sinclair gas station logo. The first live dinosaur glimpsed by the paleontologists in Jurassic Park was a sauropod, just as the first animated dinosaur—Gertie (Winsor McCay's classic Gertie the Dinosaur)—was a sauropod.

Every parent knows Brontosaurus, and every kid knows that it's now called Apatosaurus. Some of the most awe-inspiring skeletons at a natural history museum are the sauropods.

Much of this cultural influence comes down to one thing: immense size. Sauropods were the biggest animals ever to walk the land, and even Hollywood is hard-pressed to come up with something more imaginative than that which evolution wrought. So how did they get so big?

The easy answer is evolution. According to the new PLOS ONE sauropod research collection, five main traits of sauropods resulted in their gigantism: 1) having many small offspring, 2) lacking a gastric mill (a grinding apparatus in the stomach), 3) not chewing food, 4) having a bird-like lung, and 5) having high metabolism.

This text is adapted from a presentation given by PLOS bloggers Andy Farke, a vertebrate paelontologist, and Brad Balukjian, an environmental scientist. 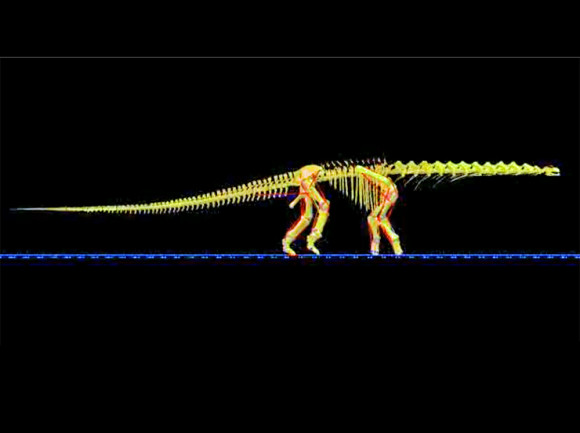 Standing in a single spot, sauropods could browse a vast swath of vegetation without ever having to change positions. All of this adds up to the ability to ingest and process incredible amounts of food, producing massive body size. 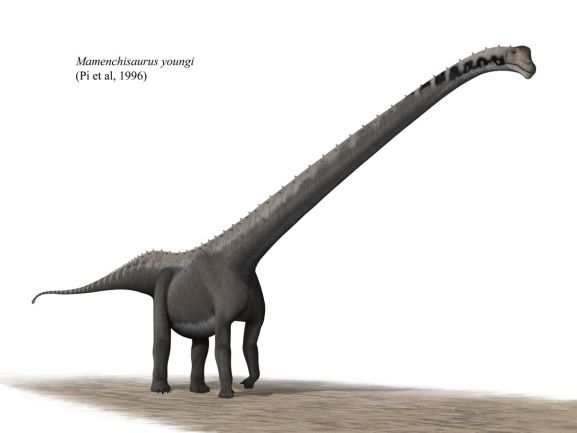 Not chewing meant that sauropods could consume massive amounts of food per day, as they didn’t waste any time masticating. Their guts were huge, but research shows that they didn’t spend a whole lot of time digesting it, allowing for fast turnover.

The lack of chewing also meant that sauropod heads could remain small, with no need for large jaw muscles. The small head opened the door for the evolution of a long neck (a small head could be easily supported), which allowed sauropods to become energy-efficient eating machines. 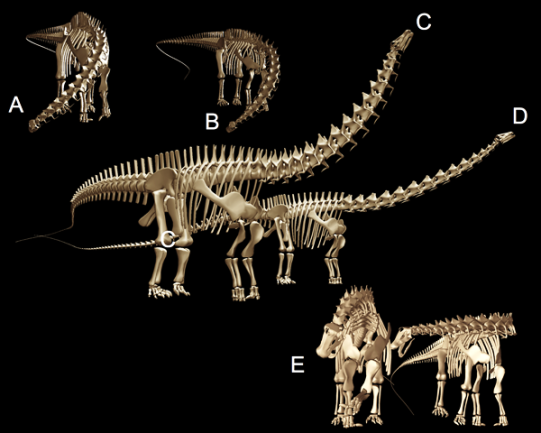 With such long necks, sauropods swept out a huge feeding surface. But length wasn't the only factor—structure mattered too.

In these modeled figures, Apatosaurus (A) and Diplodocus (B) are shown in extreme flexed states, reaching down and laterally to ground level, and in C and D as if to reach as high as possible. The researchers showed that Apatosaurus could reach higher despite having a somewhat shorter neck than Diplodocus due to some key differences in its vertebral joints.