The famous clappers had never actually been filmed smacking their flippers together in the wild. 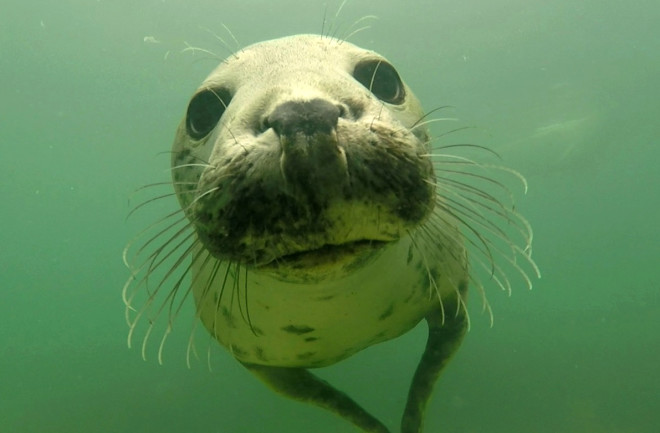 A seal clapping its flippers may not sound like a great revelation. Do an internet search for “clapping seal” and you’ll get a lot of hits. Ask a kid for their best seal impression, and odds are it will include a few hearty hand whacks.

But you won’t find any clapping pinnipeds — that’s seals, sea lions, and walruses — in Animal Behavior 101. Though it’s a trick easily taught to trained captive seals in zoos and aquariums, actual clapping has rarely been witnessed, and never recorded, in seals in the wild.

That is, until now. An international research team, led by scientists at Melbourne’s Monash University, published a paper this week in the journal Marine Mammal Science documenting the noteworthy observation.

The clap was caught on film by diver Ben Burville, who's been scuba diving with gray seals off the coast of the U.K. for decades.

He first saw a wild seal clap underwater some years ago, and has heard the creatures put flipper to flipper a couple of times since. It's likely a trick used by males to signal their presence to other seals in the area.

“It’s really, really loud,” he says. “Usually one big clap is enough to scare the other seals off and then you don’t see them clapping again.”

The one-and-done nature of the behavior makes it hard to catch on film. But during one dive a few years ago, the seals seemed to make an exception. “That one day when I did capture it, I heard some clapping in the distance, and I thought, you know what, I’m just gonna press record and just see what happens. And then, sure enough, that male seal just clapped right in front of me several times, which is quite unusual for them.”

How loud is it? According to Burville, “If you were in a quiet room, and you got a standard Bible, and you put it above your head in your hand, and then smashed it down flat on the desk — it’s louder than that.”

Burville teamed up with marine biologist David Hocking at Monash University to report on the findings. Hocking and his team have been studying how seals use their anatomy — like their flippers — to help them swim. He had been talking to Burville about filming the gray seals when the clapping footage came up. “He sent me the video and I was amazed,” says Hocking. “It’s just unlike anything I’ve seen before in a seal.”

Hocking says the first thing he did after watching the video was head to the water. “We tried to work out, how do you clap in water? It just seems difficult," he says. "But it turns out it’s actually quite easy to do.”

“I was quite proud,” Hocking says. “I made the loudest clap.”

“[The sound] doesn’t transmit out of the water, though,” he explains. “So if you clap in the pool, unless your head’s in the water too, you don’t hear the sound.”

This wild gray seal's claps are the first to ever be documented on video. (Credit: Ben Burville)

The observation is also noteworthy because of what it tells us about seal behavior. Though it may not seem like much data, the video, plus earlier observations from Burville, give quite a few clues as to why the seals clap.

The video was taken during the breeding season, and the clapper is a male. It's evidence that the behavior is meant to help signal dominance to other males in the area.

Hocking points out that if you listen closely in the video, a fraction of a second after the first clap, you can hear a second clap in the distance — a reply clap from another male.

The interpretation is that these males are competing for mates. “So this is a big male — a big bull — in the breeding season, saying, 'I’m strong, everyone, stay away,' to all the competitors. And someone else has turned around and said, 'Wait, wait, wait. I’m strong as well,'” explains Hocking. “This could be a really neat form of male-male competition, like rams butting heads, or gorillas beating their chests.”

It makes extra sense, Hocking says, since it’s an example of what’s called an “honest signal.” Essentially, a wimpy seal can’t make a loud clap like a strong seal can.

Now that this behavior has been identified, says Hocking, it will be easier to study in the future. For one, a few past studies had pointed out what they called "knock" vocalizations made by seals. Researchers can now look back at these probably misidentified sounds with a fresh viewpoint to learn more about when and where the claps have been recorded.

The one unfortunate revelation from this work is that finding a new sound-based behavior in seals introduces another way that the marine mammals could be affected by underwater noise pollution.

“If this is something that males do to help work out who’s the fittest seal, then that could be a behavior that’s important for their survival and success in the wild,” Hocking says. “[But] of course the ocean isn’t only full of natural sounds anymore … if you’re a seal moving into an area and you hear a loud pile-driving noise, does that tell you there’s a really, really big seal somewhere near here, I better not come near?”