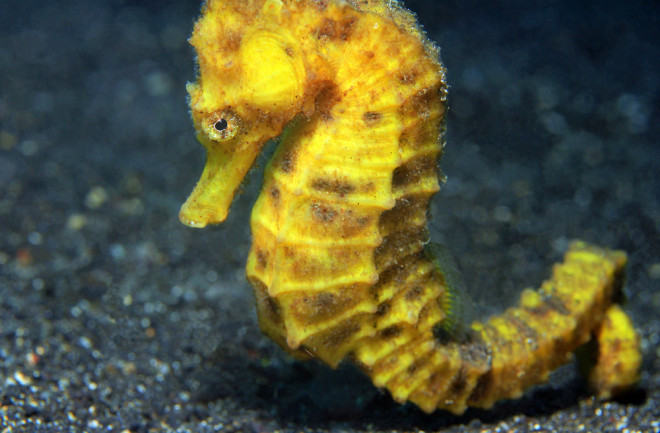 Forget Sharknado. The scariest thing to come out of the ocean recently is a video capturing the stealthy advance and attack of a seahorse.

The video came about during research on whether the shape of a seahorse's head changes its hydrodynamic profile (it does). The animal's creeping, shadowy profile hunting unsuspecting potential snacks is the stuff of nightmares.

But the video also demonstrates how the dwarf seahorse Hippocampus zosterae, and other members of its family, advance on prey with minimal water disruption. The shape of its head and its stealthy pre-attack posture allow the seahorse to achieve what the researchers call "hydrodynamic silence," meaning it avoids stirring up the water as it moves, a disturbance that would be detected by its prey.

Seahorses typically feed in seagrass or other sheltered environments with minimal water turbulence. Their prey, fast-moving crustaceans called copepods, are sensitive to any motion in the water.

And yet, in live animal experiments conducted as part of the study, the seahorses were successful in getting within one millimeter of their prey — striking range — an amazing 84 percent of the time. Once in range, the seahorse raises its head quickly and uses suction to slurp up its dinner, a method known as the "pivot." This is a different style of feeding than other marine predators, many of which rely on lunges and large, protruding jaws to capture prey.

After filming the seahorse attacks using high speed digital techniques, researchers imaged the animals in flume experiments, the watery equivalent of a wind tunnel, to measure their hydrodynamic silence. For comparison, the team also analyzed the stickleback (Gasterosteus aculeatus), which, despite being a close relative, lacks the seahorse's distinctive head shape. The stickleback's hydrodynamics were significantly noisier than that of the stealthy, silent ninja seahorse.

A Head for Hunting

Having a head for hydrodynamic stealthiness is important for the seahorse, which is generally a very slow swimmer. The creature is capable of quick prey strikes, called "pivot feeding," only at very close range. Being able to sneak up on its next potential meal is therefore crucial.

Researchers suggest that the elongated head of the seahorse evolved to create a low-shear zone, reducing disruption, or deformation, of the water around it. In addition to the shape of its head, the seahorse appears to maintain a consistent stalking posture which further reduces water movement.

The findings on the ninja-like prowess of the seahorse appeared today in Nature Communications.