Seabird Poop Is a Force of Nature 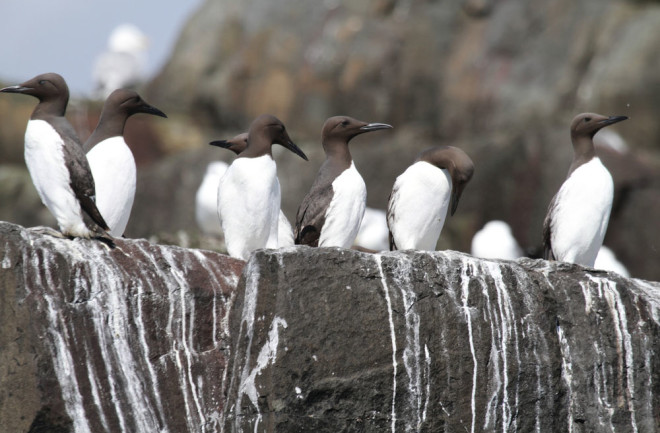 A guillemot seabird colony. (Credit: Shutterstock) On planet Earth, nothing goes to waste; everything serves a purpose — including seabird poop. Between the months of May and September, tens of millions of migratory seabirds converge on the Arctic where they eat, breed and cake the cliff sides with guano. Over time, the nitrogen in seabird droppings breaks down into ammonia, and it’s estimated that colonies emit some 40,000 tons of it into the atmosphere every year. Now, a team of researchers working in the Canadian Arctic says summertime ammonia emissions from seabird excrement may be a key factor in cloud formation. It’s a surprising new twist in scientists’ ongoing effort to understand clouds, the wild card of climate science.

Seabird has been pegged as a primary source of chemical contamination in Arctic water sources. Ponds near locations besieged by birds can contain levels of DDT and mercury some 60 times higher than bird-free areas. The birds, of course, feast on fish that ply the oceans we pollute. And they redistribute pollutants all over when they make landfall. On the other hand, seabird guano is an integral source of nitrogen, phosphate and potassium, which makes it one of the most important influencers of plant and animal biomass. It’s such an effective fertilizer, a bird guano industry exploded in the 1800s — bird poop barons grew wealthy selling the stuff to farmers, while horrifically exploiting guano miners around the world. You can still purchase seabird fertilizer for your garden today.

To reveal seabird’s role in seeding clouds, University of Toronto scientist Greg Wentworth boarded a research icebreaker in 2014 and took airborne ammonia measurements in the Canadian Arctic — something that hadn’t been done before. Wentworth used an instrument that took hourly measurements of gases in the air and analyzed particle compositions. “Initially we thought the ammonia was coming from the ocean, but realized that wasn’t the case. The major source of this ammonia was from seabird colonies,” says Wentworth. Then, he handed his field observations to Betty Croft, an atmospheric scientist at Dalhousie University, who fed the measurements to a computer that modeled particle formation in the atmosphere. She ran one model without ammonia contributions from the birds, and another that included them. Her work revealed that ammonia from seabird droppings mixes with sulfuric acid and water from the ocean. These particles then coalesce and grow large enough to seed clouds. Croft and colleagues published their work Tuesday in the journal Nature Communications. “The key point of our study is that we are able to make the connection between seabird colony ammonia and particle formation in the Arctic,” says Croft.

The complexities of cloud formation are still not well understood, but what's clear is clouds help regulate global temperatures. They can block the sun and cool regions of the planet, or act like blankets to keep places warm. Scientists believe clouds exert an overall cooling effect on the planet, and might moderate increases in global temperatures. The trouble is clouds aren’t easy to study; they’re in constant motion, they don’t persist very long, and they come in myriad shapes and types. Low-hanging stratus clouds, for example, resemble a gray quilt in the sky and block sunlight from reaching Earth, like an umbrella blocking the sun. But at night, these same clouds can trap heat like a blanket. And that's just one type of cloud formation. So it seems logical to conclude that more seabirds equals more ammonia equals more clouds equals a colder Arctic. But seabird poop is not a panacea. Croft made that abundantly clear. “We are not putting out the message that seabird colonies are keeping the Arctic cool,” she said. “We have to acknowledge that this is one of many factors working together. There’s a lot of work to be done to understand all the related processes.” Instead, Croft says this study is a vivid demonstration of the myriad variables that affect an ecosystem. The place we call home is like a Jenga puzzle. Every piece serves a purpose, and jiggling one block can have a big impact on the rest of the stack.