Sea Sponge Is Ousted, So What's the Last Common Ancestor of All Animals? 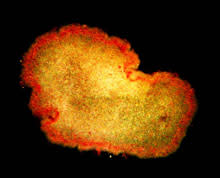 A new genetic analysis has shaken up the tree of life, dispelling the common assumption that sea sponges or comb jellies are the original ancestors of all animals. That original animal, also referred to as the "ur-animal," is thought to have given rise to both the "lower" animals (Cnidaria), such as coral and jellyfish, and "higher" animals (Bilataria), such as insects and humans. Based on the new study, researchers are now putting forth a new classification, which would place sponges among the "lower" animals, leaving an open spot for the original animal.

"It's a question that has plagued animal biologists for a couple hundred years: What could be the mother of all animals?" said [researcher] Rob DeSalle... "We've turned it upside down" [Wired Science].

Taxonomy has come a long way since the Linnaean system, based largely on comparative anatomy, was introduced in 1735. The research team

fed morphological data on the appearance of animals from 24 taxa together with genetic information into a computer program that assessed similarities and differences to generate a phylogenetic tree of life [Nature News]. The results placed placozoans, a simple amoeba-like but multi-celled organism, as a more ancient animal than even the sea sponges. Yet, at the same time, the data suggests that placozoans is not the last common ancestor of all animals because they are not directly related to the more complex Bilataria.

"It fits in with what you might think is the most basal animal. It's only got three cell layers and four cell types. Its motility is primitive. It lives in warm oceans. It's got all the earmarks of the thing that gave rise to all animal life," said DeSalle [of placozoans]. "But that's not what the results show. And though placozoa is the ur-cousin of complicated life, we still don't know the ur-mother" [Wired Science].

Placozoans were discovered about 100 years ago clinging to the side of a laboratory aquarium.

Little is known about placozoans in their natural ocean habitats, but just last year, scientists sequenced its genome. Most of us have little experience with Placozoans. They form into sheets on rocks and corals in temperate seas and "are really cool to watch and they move by undulating. There are no muscles," DeSalle said

According to DeSalle, the result is reasonable because other traits, such as eyes, are known to have evolved independently more than once.

DeSalle had once thought that placozoans might be a candidate for the ur-animal, but the new analysis, published in PLoS Biology, denies that. Nevertheless, placozoans placement as the earliest known Cnidaria uncovered another surprise. Since placozoans lack a nervous system yet both later Cnidaria, such as jellyfish, and Bilataria have nervous systems, this indicated that the nervous system has evolved at least twice in the history of animal evolution.

"Evolution has done all these experiments, and when you reconstruct common ancestors, you're reconstructing the results of the experiment," said DeSalle. "If you want to look at the development of our brains, of our nervous system, of anything we have as a result of experiments that nature has done, the best way to do it is to reconstruct our ancestors "[Wired Science]. While the ur-animal remains a mystery, DeSalle suggests a good place to look would be